The broadcaster partnered with Verizon to offer fans TUDN Vision

Mexico City’s Cruz Azul soccer club was named the champion of Liga MX on May 30 after defeating Santos Laguna 2-1 on aggregate. That competition and several others were viewed through TUDN Vision, TUDN’s 5G-powered virtual portal where supporters experienced the action in a 360-degree environment on mobile devices, as well as on-screen Enhanced Data Analytics on the linear broadcast.

“[These implementations] provided opportunities for fans to learn and educate themselves as to what was happening on the field,” says Miguel Angel Garcia, SVP, live events, TUDN, Univision’s sports-programming division. “It helped with the storytelling that we always try to deliver, and what made these unique was that everything was completely live.”

During a time when fans are gradually returning to venues, the decision to develop TUDN Vision found immediate results on two fronts: fans who have never had a chance or were unable to experience the atmosphere of a match could see the traditions of game day, and those who frequent matches are able to enjoy the experience from the comfort of home. 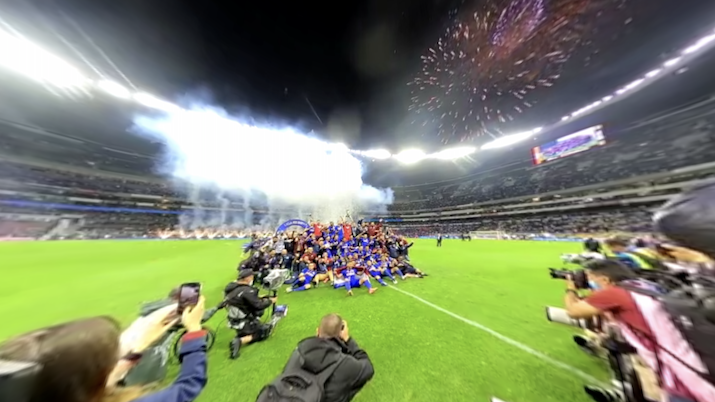 TUDN Vision was deployed during Cruz Azul’s title-clinching Liga MX win on May 30.

Before releasing this digital-exclusive to the public, TUDN worked out numerous problems during an extensive testing phase in the four participating venues in Mexico: Estadio BBVA in Monterrey, Estadio Olímpico Universitario and Estadio Azteca in Mexico City, and Estadio Nemesio Díez in Toluca. Led by TUDN VP, Digital Editorial Operations, Felipe Osorio, the team navigated through certain logistical and technological challenges.

“When we started to look into 360-degree live shows with multiple cameras from a stadium,” he says, “it had never been done before, and there was always this fear of this not working. Due to the pressure on the global supply chain around microchips and other supplies, the second issue was not having a full test.”

One of the bigger logistical obstacles was encountered at the Estadio Olímpico Universitario. Once the largest sports venue at the time of its opening in 1952, the 72,000-capacity stadium, located on the main campus of the Universidad Nacional Autónoma de México (UNAM), has become synonymous with Mexican fútbol. Designed by some of the most well-known Mexican architects of the 20th century, the university was named a UNESCO World Heritage site in 2007, a designation that added an extra set of precautions to this endeavor.

“It made it extremely difficult to get permits from the city and university to do any installation of the infrastructure,” Garcia notes. “We weren’t able to touch the field or construct any platforms, but we were able to get it done.”

One of the technological hurdles during testing was RF bandwidth. In stadiums packed with fans as well as other media companies, TUDN faced the possibility of signal interference, but Verizon’s 5G network enabled the broadcaster to push through the clutter.

“In a large stadium, there can always be a lot of interference,” says Osorio. “At the beginning, we were not able to get a signal from the camera, but, by moving it around the field, we were able to finally get one. There was a lot of trial and error.”

With testing completed, TUDN nailed down a production plan that would transport at-home viewers to the stadium in real time. At the core of the plan were three Insta360 Pro cameras, which captured all the onsite material, including fans walking into the stadium, players walking through the tunnel, and coaches speaking to the media during the postmatch press conference. During the match, the cameras are placed in close-up areas of the pitch, including the middle of the touchline and behind the nets.

A team of seven was separated into two groups: a technician stood next to each camera at each location to make sure the feed was being transmitted properly; the other four facilitated the live stream via a Blackmagic ATEM Television Studio Pro 4K production switcher in the onsite control room.

Overall, the experience served up another chance for fans to become invested in the teams, players, and action of Liga MX. For the younger demographic, this initiative was easily accessible and highlighted parts of a match that the linear broadcast can’t always cover.

“It brought the colors and feeling of being inside of the stadium,” adds Osorio. “If we were to have a normal camera, you would get only one angle, but [a 360-degree camera] allowed fans to turn the video feed around to see the lights, hear the different music, and be closer to the action.” 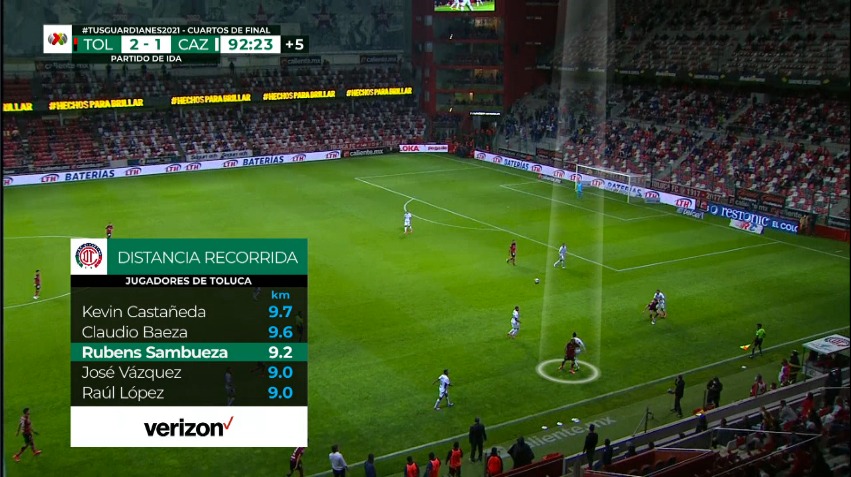 360-degree video wasn’t the only improvement seen during the Liga MX season. On the linear side, TUDN was able to present Enhanced Data Analytics through augmented-reality graphics and real-time player-tracking data. Proprietary cameras, including 16 used at Estadio Azteca, enabled overlay of AR graphics displaying 20 physical aspects of a game, including sprint speed, total distance run, hot zones for team possession, and free-kick distance.

“We uploaded all of the information to the cloud in two clusters [for our remote-production teams]: one in Mexico City for the main production and one in Miami for games shown in the U.S.,” says Garcia.  “We worked with ChyronHego to develop a template that matched the look and feel of our current graphics style.”

In addition, these AR graphics were shown on the broadcaster’s slate of studio programming, including Contacto Deportivo and Mision Europa.

“We had some shows that used this to analyze plays during the postgame,” Garcia adds. “[The studio team] has more time to use this tracked data, but we provided these tools to them. We also requested to have this used during warmups, so fans can see data and focus on how a player is feeling before the match.”

Like TUDN Vision,  Enhanced Data Analytics helped tell the full story for more-knowledgeable viewers and showcase the physicality of the sport to newer fans.

“It’s important for our viewers and on-air talent to have that real-time data and see how it’s affecting the match,” he says. “Fans not only watched the game but basically became a coach since they knew the differences in minutes played by certain players and each of the teams’ formation.” 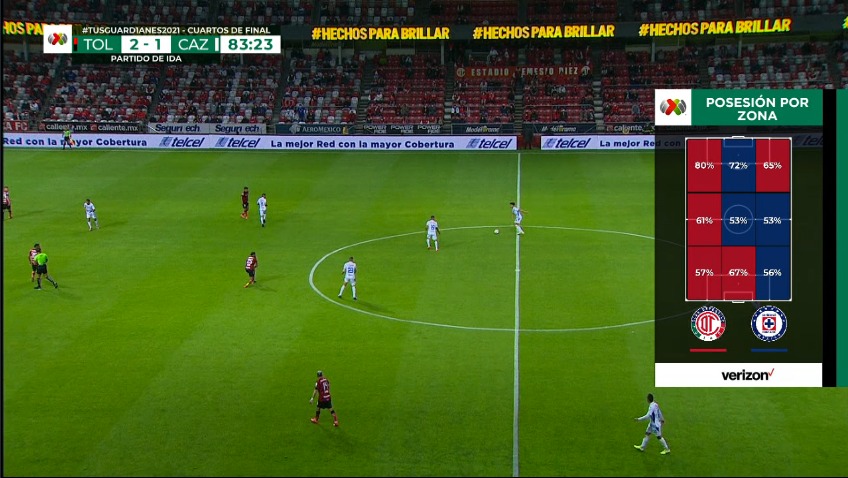 With a strenuous Liga MX season behind them, TUDN is still quite busy with international soccer. In the past, the broadcaster aired the UEFA Champions League Final between Chelsea and Manchester City and the CONCACAF Nations League Semifinals and Final. Currently, it will be working on UEFA Euro 2020 and the Copa América and will be tasked with the CONCACAF Gold Cup at Las Vegas’s Allegiant Stadium from Matchday 1 on Friday, July 2 to the Final on Sunday, Aug. 1.

For Copa América, Garcia and his live-events team have adapted strategy on multiple occasions, especially after the tournament’s host was changed twice: first from Colombia to Argentina on May 20 and then from Argentina to Brazil 10 days later. In this continent-wide tournament, the broadcaster deployed an onsite team in each of four cities in Brazil: Estádio do Maracanã and Estádio Nilton Santos in Rio de Janeiro, Estádio Nacional Mané Garrincha in Brasilia, Arena Pantanal in Cuiabá, and Estádio Olímpico in Goiânia. The goal was to bring the most out of this exhilarating competition.

“We’re trying to bring our fans the excitement of each of the games, which is why we sent out our crews [onsite],” Garcia says. “We have full coverage with pregame and postgame shows, and we’re adding our own graphics and enhanced experience over the main feed. We’re also downlinking the international Spanish graphic signals as a backup.”

TUDN has branded the next few months as the “Summer of Champions.” Despite the long hours required to prepare for each tournament, Garcia, Osorio, and the rest of the crew are enjoying it as much as possible.

“It has been great to be a part of the most important soccer events in the world,” says Garcia. “It’s a lot of work, but, at the same time, it’s rewarding to be able to produce these games and have fun while doing it.”

Copa América on TUDN continues with a pair of doubleheaders this weekend: Peru vs. Paraguay at 5 p.m. ET and Brazil vs. Chile at 8 p.m. on Friday, July 2; Uruguay vs. Colombia at 6 p.m. and Argentina vs. Ecuador at 9 p.m. on Saturday, July 3.