In the W: After Last Year’s Wubble, Atlanta Dream Works With 3 Point Productions To Light Up Gateway Center Arena

One challenge has been adjusting to entertaining fans in the stands

In 2020, the WNBA learned a lot about the resiliency of its players and others working within the league. The W also discovered the value of its production partners on the in-venue side. For 3 Point Productions , a production company recruited to help the league with in-venue productions in the Florida-based “Wubble,” the 2020 campaign offered an opportunity to show off its capabilities and gain the trust of the Atlanta Dream to produce its home games at Gateway Center Arena.

“We had the privilege of working with all 12 teams to create a home-court advantage in Florida,” says Matt Heuer, creative director, 3 Point Productions. “The conversation [with the Dream] carried over into 2021, and we’re now the official game-presentation partner of the team.”

Founded nine years ago, 3 Point Productions is a familiar face in professional and collegiate circles, having handled festivities at MLS All-Star, the NCAA Final Four, NBA Drafts, and more. The vendor also has prior relationships inside the WNBA with ties to the Seattle Storm, Phoenix Mercury, and New York Liberty. One of the company’s most ambitious projects was rebranding the in-venue show and theming from the San Antonio Stars to the Las Vegas Aces in 2018. Even though the league played the entire 2020 schedule in a closed-off environment, the timing could not have been better for both the Atlanta Dream and 3 Point Productions. 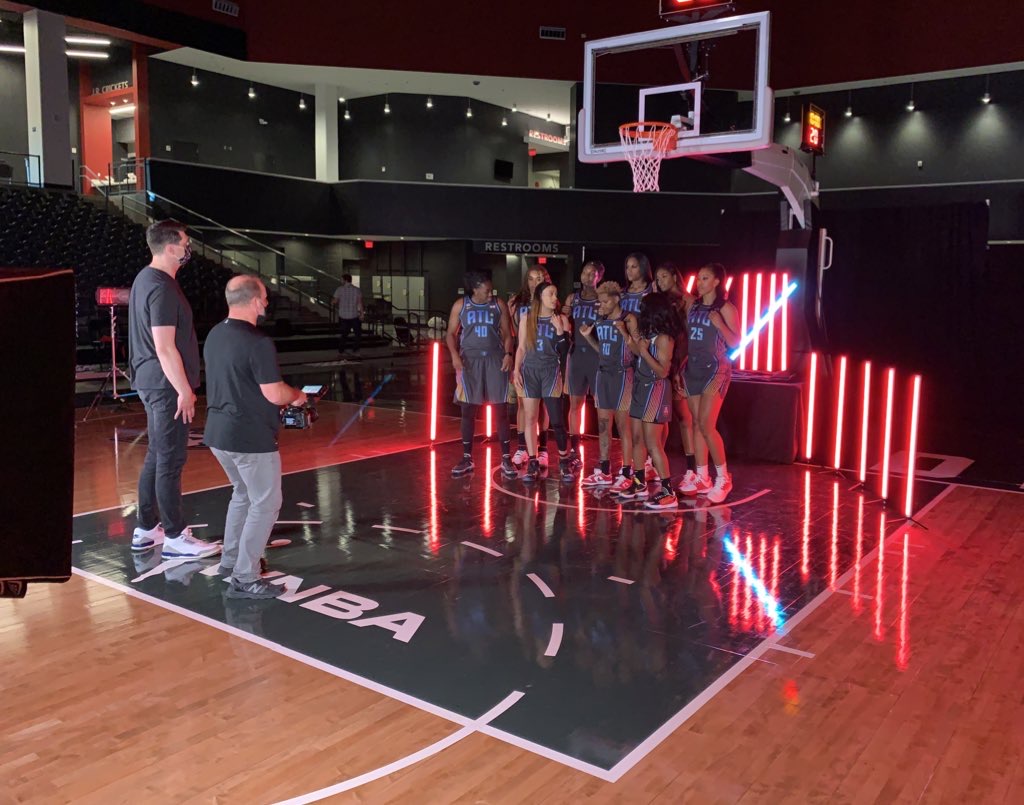 3 Point Productions’ Matt Heuer (left) works with the Atlanta Dream on the court at Media Day.

Says Heuer, “The Dream were really impressed with how we themed elements and how hyper-focused [our show] was to an Atlanta soundtrack to make their games a bit different.”

Under new ownership that includes former guard Renee Montgomery, the Atlanta Dream are in a new chapter in the franchise’s 13-year history. In addition to signing Heuer and his company, the team logged another milestone: opening the doors to Gateway Center Arena, a new venue adjacent to the Georgia International Convention Center, in November 2019. All signs pointed to a successful first season in the new space, but the COVID-19 pandemic threw those plans out the window. As the organization continues to make moves in the right direction, 3 Point Productions continues to support its in-venue needs.

“It has been great to be a part of their transition into this new arena,” Heuer says. “It’s a very good fit for the Dream and [the organization] that they’re growing into.”

Game Day at the Gateway: Live Performances Return to the Court 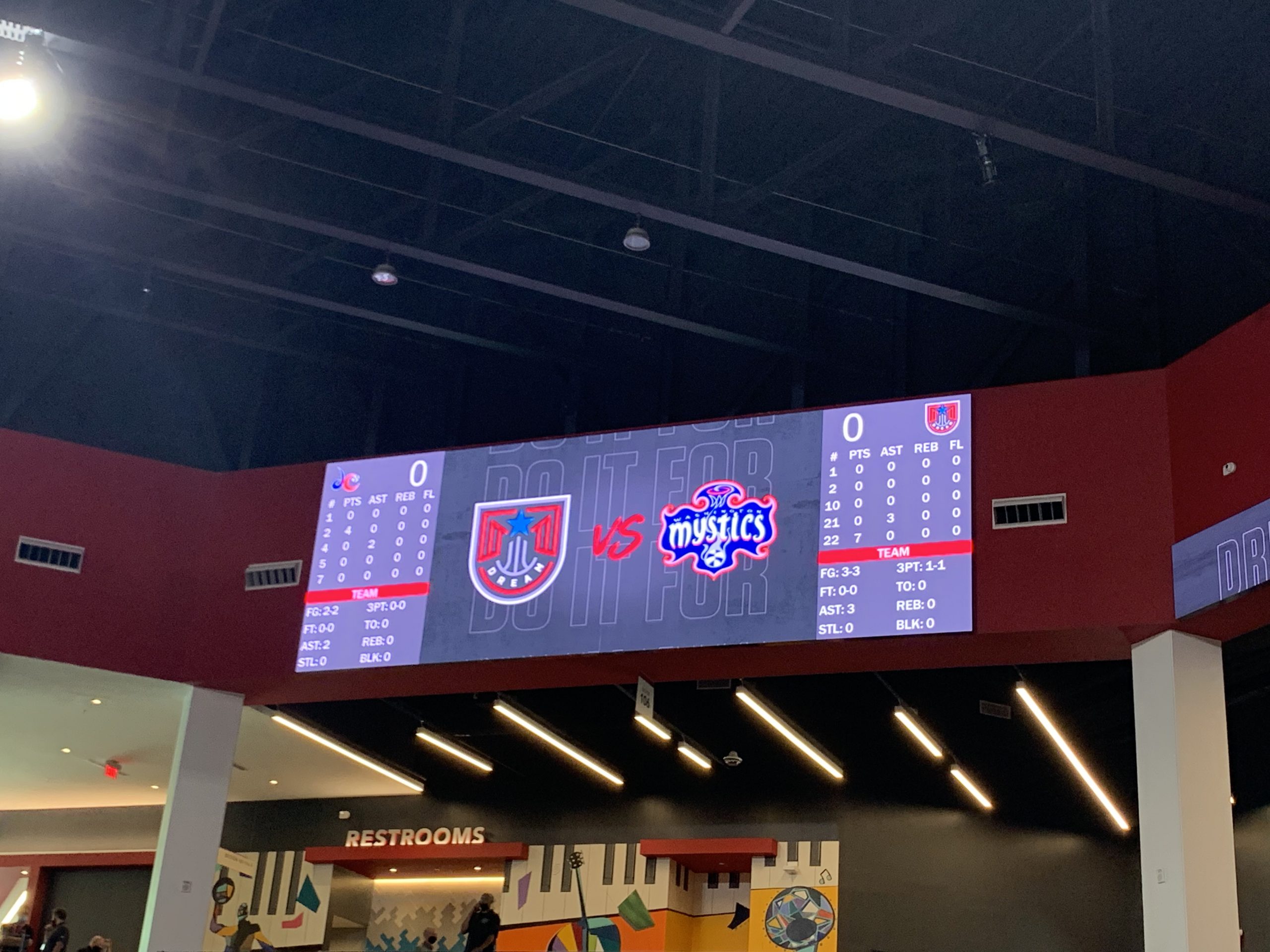 When the home schedule tipped off against the Connecticut Sun on May 14, the production looked a lot different from the current show. The 15-ft. buffer zone between the court and the first row of available seating is still in effect today, but the permitted fan attendance has increased to the venue’s normal 3,500 capacity. During the early months of the schedule, production departments around the league had to resolve issues that they had never faced before: for example, how to go from zero fans in the bubble to the first crowds seen since 2019.

“It’s evolving with the protocols and what we’re allowed to do,” Heuer notes. “Right out of the gate, a lot of people working in my position had to face the challenges of how to entertain fans. Whether you have one fan or 20,00 in the building, you still have to come up with a presentation for the show.”

Among the activations is a variety of Fan Cams. 3 Point Productions’ Atlanta-centric shows dives into the city’s music scene with a DJ Cam and highlights the players with content surrounding their rookie cards. During the Pride game vs. New York on June 26, the team broke out the Love Cam to celebrate the LGBTQ+ community. 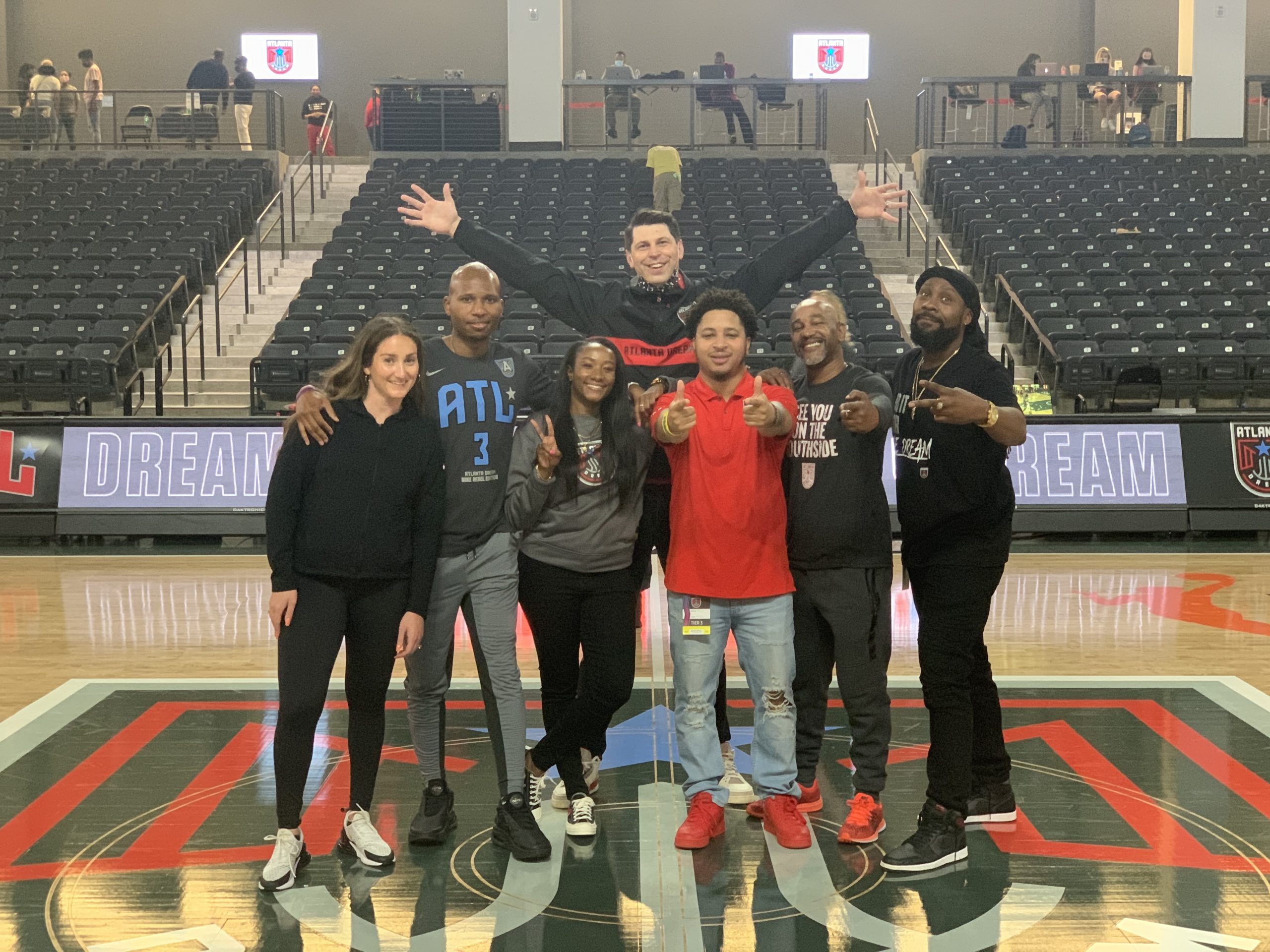 The Atlanta Dream’s production team is one of many that 3 Point Productions works with in the WNBA.

Some physical signs of the pandemic — the 15-ft. buffer zone, for example — remain inside the building, but, with the gradual rollback of restrictions, the production is able to integrate moments of real-time interaction. The Pride game featured live performances, including the singing of the national anthem by the Atlanta Women’s Chorus and a show by Storytime Cabaret. These instances are welcome signs of normalcy, but the schedule hiatus from July 12 to Aug. 11 for the WNBA All-Star Game and the Tokyo Olympics should allow a further rollback of regulations and the introduction of new game-day ideas.

“The crowd immediately erupted once they hit the floor because it has been so long since they’ve seen these live performances,” says Heuer. “By the time the season comes back, we’ll be at a place where a lot of that [other content] is happening and we’re able to entertain the fans with more elements on the court.”

The Ones Who Get It Done: Shoutout to the Atlanta Dream’s Production Team 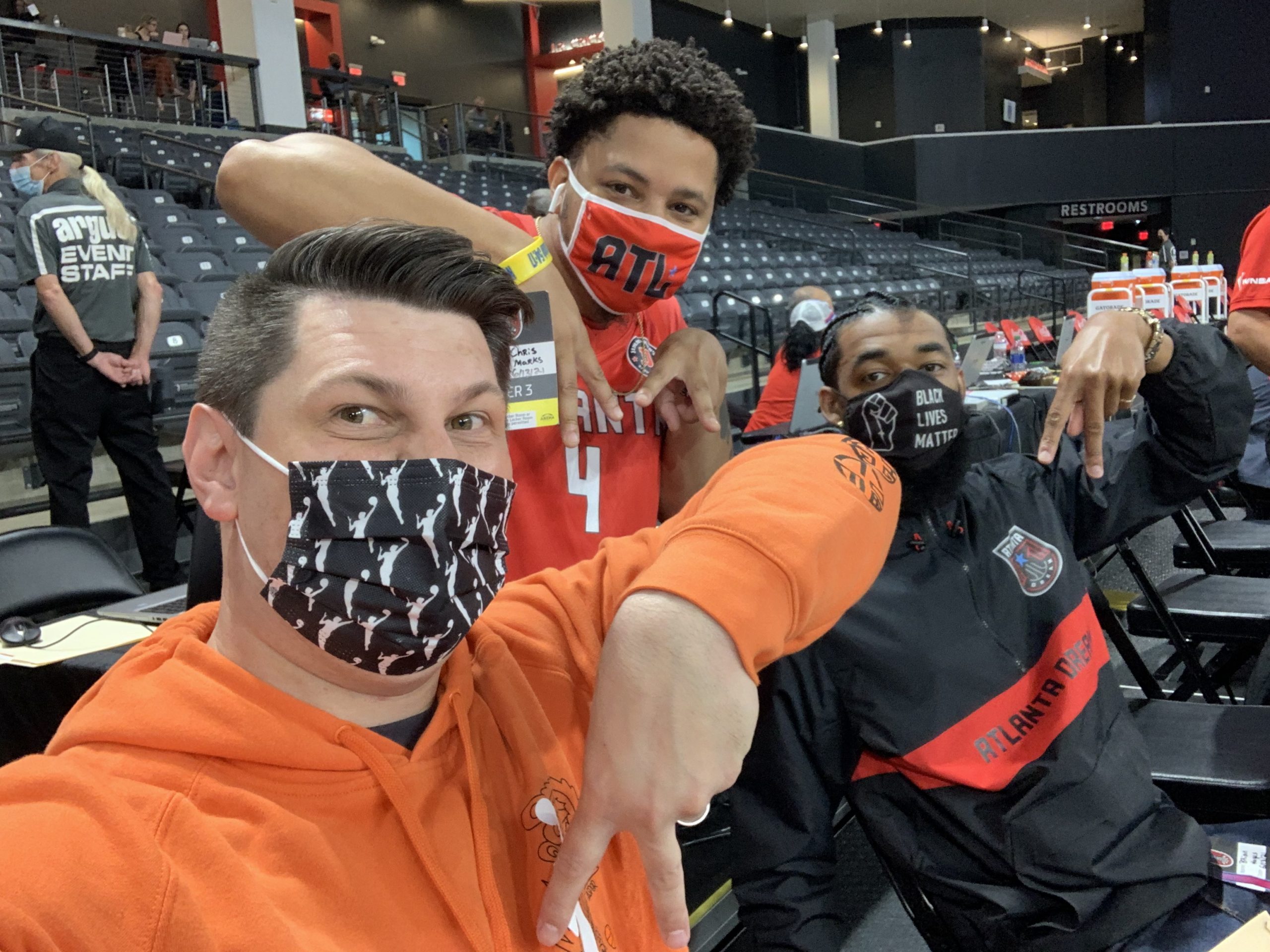 2021 may be 3 Point Productions’ first time working in Atlanta, but its effort is giving the Dream an extraordinary show in their inaugural season at Gateway Center Arena. The most impressive aspect of the company’s work in Atlanta is that it also helped develop productions for the NBA’s Basketball Africa League roughly around the same time. One of the individuals who worked overseas on the project, Game Director Brian Hayes, is back stateside and holding down the fort for the Dream. Also on the team are In-Game Hosts Bria Janelle and Ed Long and Producer Justin Sullivan and his control-room staff. Heuer looks forward to working with this core group of professionals throughout the rest of the regular season.

“Our network is extremely strong within the league, but I’ve never personally worked with the crew down in Atlanta,” he says. “We had half of a preseason game to put a plan together, so we didn’t have a ton of time to develop a lot of chemistry, but it’s a great group that looks out for each other and has a lot of fun together.”

After a quick road trip to Connecticut to take on the Sun, the Atlanta Dream will return to Gateway Center to host the Indiana Fever on Sunday, July 11 at 5 p.m. ET.