Denver’s Coors Field is a power hitter’s heaven, and, for batted balls flying all over the place during tonight’s Home Run Derby, ESPN will showcase this year’s Statcast-driven alternative broadcast with reimagined on-air elements and other real-time augmented-reality (AR) overlays on ESPN2. Yesterday, the broadcaster highlighted its MLB Draft coverage with a remote production from the compound.

“Our alternative Statcast presentation offers us a great opportunity to test the [production] waters,” says Phil Orlins, senior coordinating producer, ESPN. “We’ve always differentiated our Home Run Derby coverage on ESPN2, but, this year, we’ll have a really aggressive plan to differentiate visual coverage of each at-bat with augmented reality.” 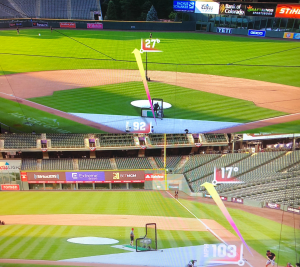 Since debuting at the 2018 MLB All-Star Game in Washington, DC, a Statcast-centric production has captured the attention of both younger fans and diehard fans who are into new-age analytics. In 2019, the broadcaster continued execution of 3D spray charts and, this year, will implement them on the aerial FlyCam system that will soar across the outfield grass after the conclusion of each batter’s round.

For a twist making its Home Run Derby debut, ESPN worked closely with Major League Baseball on real-time augmented-reality graphics. The overlay will display an arrow pointing in the direction of the batter’s calculated launch angle with exit velocity at the bottom. As the ball travels through the air and lands in the stands, the alternative broadcast will show a target with the ball’s accurate distance. 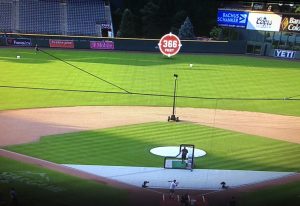 A target with accurate distance will appear at the site where the ball lands.

“In 2018, [advanced analytics] weren’t as mature and well-developed as they are now,” says Orlins. “Now fans are constantly seeing it.”

Seen during the 2019 Derby, a two-box format is being deployed to accommodate the fast pace of the event. Paired with these new AR activations, the Statcast edition will keep the batter on the left side of the screen and toggle between a high-home-plate view and angles from both the first- and third-base sides. In previous iterations, Orlins and his staff had to react quickly and potentially miss a ball landing in the crowd. 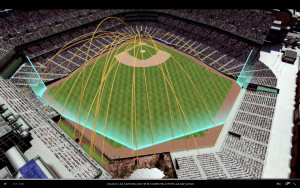 Another example of Statcast graphics is 3D spray charts.

“The best-case scenario was a home run being hit and the next pitch coming right as the ball landed,” Olins notes. “The primary box [on the right] is pretty frenetic, with balls being hit into the air, balls landing, and other reaction shots. Committing to this split screen has been one of the biggest enhancements that we’ve made over the last five years.”

In the compound, all studio shows, the main presentation, and Statcast edition of Monday’s slugfest will be produced from five separate NEP trucks: ND4 A and B units, Black, Red, and Super B. To produce this high-profile event, the quintet of mobile units will unfortunately be different from what ESPN is accustomed to using.

“The mobile units that we’ve used for this event in the past were not available due to the overlap in sports that is happening right now,” explains Cindy Pennington, project manager, ESPN. “Along with crewing, these were some of the challenges that we’ve had to deal with this year and had to rethink things.”

The rethinking of production elements has extended far beyond the compound. During other years, ESPN would construct its infrastructure for the Derby on Monday, break down the equipment, and allow Fox Sports to erect its dedicated devices. This year, both broadcasters are following a more streamlined plan, sharing specific resources within the venue.

“Since we use similar camera positions, we finally said, ‘Hey, why are we building on one day and