After a 16-month hiatus, the non-stop traveling circus that is WWE’s live-event tour returns this weekend in Texas. The 25-city tour through Labor Day marks the end of the company’s ThunderDome era and the return of in-arena fans to WWE events. Although audiences are a welcome return for WWE productions, the team will also bring back many of the elements deployed for ThunderDome shows — most notably, a more extensive use of augmented reality in its broadcasts.

“We’re ecstatic to be back in front of a live audience,” says Chris Siciliano, SVP, production services, WWE. “Live audiences are almost a character within our broadcasts in and of themselves. They bring so much passion and energy to our product, we can’t wait to be back in front of our audience. That said, we also incorporated many more visual components into our stagecraft [during ThunderDome]. We will continue those [elements], and I think all of that is going to translate into our live shows really well.” 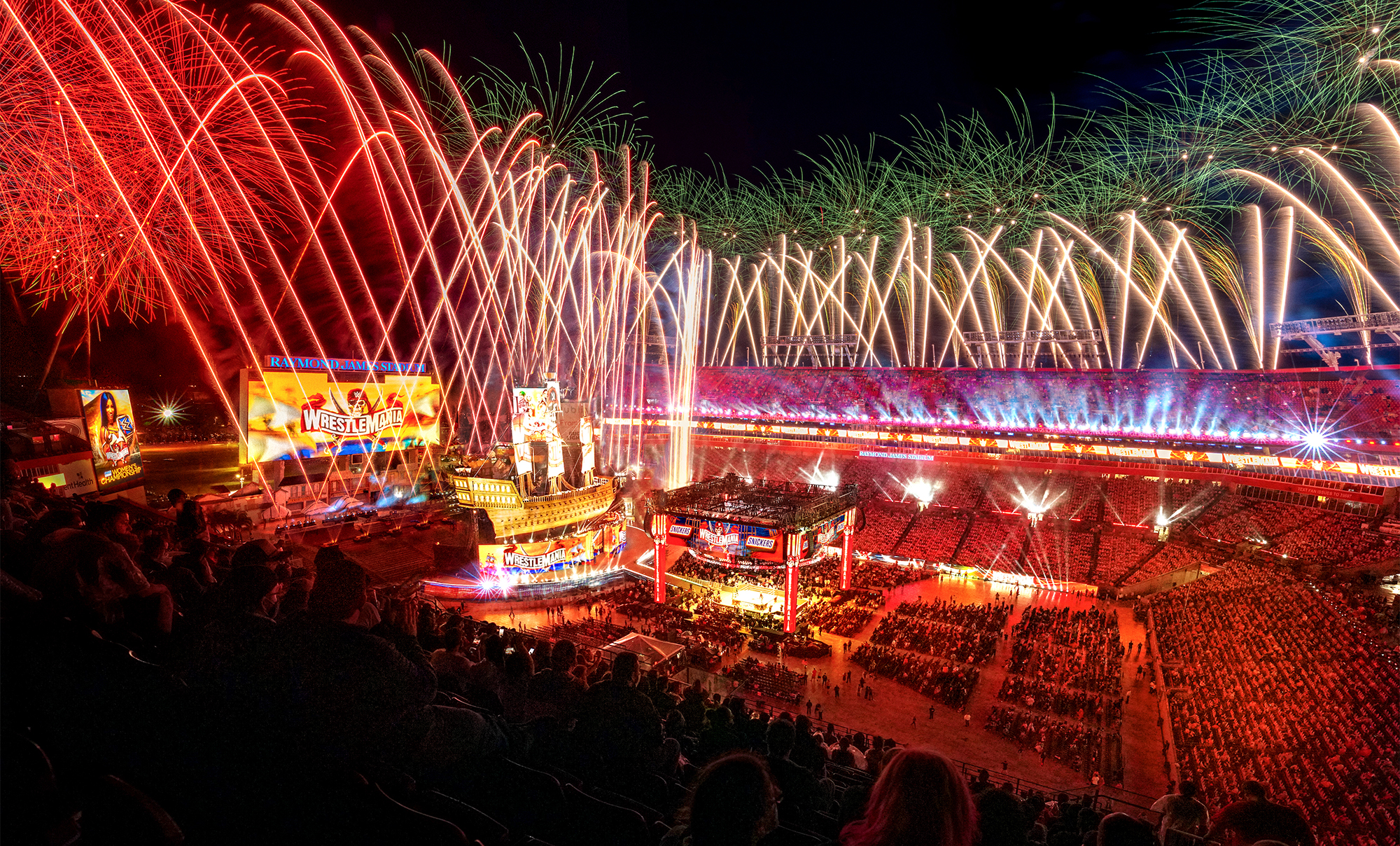 WWE first welcomed back fans during WrestleMania in April and now returns to touring with in-venue fans.

After setting up shop first at the WWE Performance Center in Orlando and then taking up Thunderdome residencies at multiple Florida venues over the past 16 months, WWE resumes touring tonight with a series of shows from Texas venues: Smackdown on Fox from Houston, a Money in the Bank PPV Sunday from Fort Worth, and Raw on Monday on USA from Dallas. Although audiences were on hand for WrestleMania 37 in April, tonight’s edition of Smackdown will mark WWE’s return to regularly scheduled in-person events.

Ramping Up AR on the Road

The WWE ThunderDome featured a live-virtual-fans system (developed in partnership with The Famous Group) to go along with massive LED videoboards, pyrotechnics, lasers, and drones. Among the most significant additions to the broadcasts during the ThunderDome period was the heavy integration of augmented-reality graphics.

“We’ve been doing AR for about two years now],” says Siciliano, “but it grew by leaps and bounds [during ThunderDome. When we started, it was a bit of an experiment, and we just wanted to see how we could integrate this technology into our programming. Over the two years since and especially at [ThunderDome], it blossomed into something beyond our expectations in terms of its sophistication and how often we use it.”

Until now, WWE has integrated AR elements into the broadcast via a Stype Follower system mounted on a jib camera. Beginning tonight, WWE will take it a step further by making AR available on its Steadicam, allowing dynamic movement around the AR elements.

WWE SmackDown was hosted inside the ThunderDome for nearly a year and will now return to the road.

“We’re going to take a much more robust approach to AR [moving forward],” says Siciliano. “Our superstar entrances are going to become even more dynamic and captivating as we utilize more-dynamic moving and animated AR to both figuratively and literally augment the creative representation of our talent.”

WWE will deploy Stype’s Follower Witness tracking system, which comprises an array of 14 cameras hung within the overhead lighting rig and pointed downward. The system tracks the Steadicam’s position and orientation via an IR beacon mounted atop the camera rig, enabling AR graphics to adjust dynamically to the camera’s movement.

“I’m really excited about the handheld component because Steadicams by their nature can offer so much flexibility and variety in the angles you can get,” says Siciliano. “It’s going to make our AR really come to life. With the Steadicam able to move in and around it and look at it and present the larger-than-life essence of our characters, it’s going to be amazing.”

WWE Raw also hits the road after a year of productions inside the ThunderDome.

WWE currently deploys Brainstorm and Epic’s Unreal Engine to create and play out the AR elements in its broadcast. Although the production team was able to master the AR system while working in a fixed facility for ThunderDome shows, it now must shift the complex system from one venue to another for every show.

“Traveling that system presents some challenges,” says Siciliano, “not challenges that we can’t overcome but challenges nonetheless. When you set that up in a static location, you’re pretty much done. But, as we move it around, the venue and the stage setup are never exactly the same from one place to another. Every week now, we’re going to have to place and cal