NBC’s production of the Open Championship has always spanned the Atlantic as the Golf Channel team back home was always heavily involved. But this year the entire production is spanning the Atlantic more than ever with most of the production team in Stamford. “The Open Championship is back, and we’re thrilled to be broadcasting this major,” says Ken Goss, EVP, studio/remote operations planning, NBC Sports. “Once again safety continues to be our number one priority and producing the Open out of Stamford was our best alternative this year.” 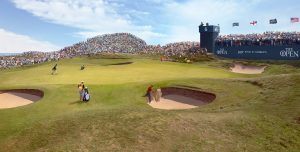 The NBC golf production team for the Open Championship is split, with 55 people at Royal St. George and 125 working from Stamford.

“We are taking the world feed pictures and splitting our announce team into two,” he says. “The guys who normally work on the on-site announce towers are here in a studio here in Stamford and our walking announcers, interviewers, will be coming from Royal St. George (To read more about the world feed production click here).

Allison McAllister, NBC Sports VP, golf operations, says about 55 people are in Royal St. George, including both the “Live From” team and those working on the tournament. Lisa McLeod, NBC Sports, director, operations and production, is playing a big role overseas along with Alice Cutler, NBC Sports, production manager.

“We couldn’t do it without her and then we have the technical geniuses and Craig [Bernstein, NBC Sports VP, Remote Technical Operations and Engineering] team that have been absolutely amazing, so we’ve been beyond fortunate,” she says. “But at the end of the day it is about keeping everyone safe and doing was it best.”

“We’re using the control room for the main production, the audio room is our main audio, and then video is also being run out of there,” says Keith Kice, NBC Sports, senior director, technical operations. “It worked out great because we have done a lot of the interfacing by putting graphics in an outside trailer. When we walk out after the Open it will be halfway [setup] for the Olympics.” 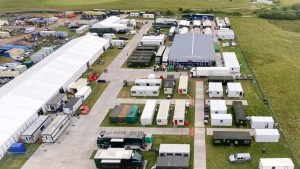 NBC Sports has 55 personnel on site at Royal St. George for the Open Championship.

A NEWBERT flypack at Royal St. George as it is the front engine for getting signals back to the team in Stamford (those signals are all PAL with conversion done in Stamford). Marc Caputo, NBC Sports, director, technical operations says the 16 IP paths that have historically been used for the “Live From” coverage are being used this year to send back multi-viewer signals (two with 16 sources and one with nine that are each placed into the Flex 39 monitor wall, unilateral camera signals (from three handhelds, three minis, and three hard cameras), as well as access to the Hawk-Eye servers. NBC’s Hawk-Eye operator is in Oklahoma and has access to the Hawk-Eye servers in the UK and he can have replays sent directly to Stamford.

“If we ever needed to go back and get a shot we have access to it,” says Bernstein. “So, we’re backing ourselves up with sources and are in good shape for not being there.”

The “Live From” sources have been scaled back to eight (plus a Live U signal) and those run through NEWBERT to Stamford where tech managers take control of the paths. Caputo says CTV’s OB9 truck is at Royal St. George and supplementing NEWBERT with video shading for the ‘Live From’ cameras and the six dedicated NBC cameras.”

Since the pandemic began the NBC Sports team has had plenty of experience working remotely and Bernstein says they have gotten well accustomed to it.

“Technically it has gotten to the point where it is pretty transparent to the guys in the production gallery,” he says. “And the energy of the show is coming from the fans being back on the course. But we’ve gotten pretty proficient at being able to move operators to different parts of the world and still have it feel like a coherent production.”

Tom Popple, NBC Sports, VP, studio and facility operations, adds that the commentators are also getting used to working remotely and the goal is to give them the best environment possible to do their job.

“Dan Hicks was here to do the French Open as well with Mary Carillo and we’re also doing it this way for the Tour de France,” he says. “Everybody is happy with their set ups and it’s as good as it can be.”

Roy says that while it is obviously not ideal, the world feed, produced with more than 140 cameras, is top notch.

“The world feed is excellent and is headed up by Jim Storey, one of my great friends in this business,” says Roy. “The world feed is going to be great, but it is different than the customized telecast that I normally would produce for our American audience. They are the primary feed for all of the UK, plus they have their international clients from around the world that they’re catering to, as well.”

He says interacting with the overseas announcers won’t be too different from being in the production cabin at the Open and pressing the button to their headset so they can talk back to him.

“I think the challenging thing for the guys over here is not being able to experience the conditions that the players are dealing with out there as they make their way out on the course,” he adds. “There they can look out the window of their tower and see what’s going on. [This year] they’re experiencing that from several thousand miles away.”

Royal St. George is a links golf course and that requires a different style of play that will put the emphasis on players landing the ball short of the green and bouncing it up.

“We’ve put a lot of effort into our tracing technology and what we call bounce-and-roll to show the American viewers just how golf is so much different,” he explains. “Plus, you’re dealing with the weather conditions, the wind. We put a lot more effort into documenting the wind. What’s the wind speed on one side of the golf course versus what it is over on the other side? Because it’s usually blowing much harder near the water.”

Keeping track of not only the live conditions but how they compared to the morning or how they will change later in the day is a big storytelling component as Roy says it can make the course that much harder or easier.

NBC will have a few unilateral cameras as Roy says there will be three RF minis that will go with the leaders and star groups on Thursday and Friday. The NBC team will also have additional cameras on the 18th hole.

The biggest challenge with relying on the world feed is that play on the course does not stop for commercial breaks.

“When I am in control of the broadcast, I can make sure I record the most important shots and come out and play those and then go to an interesting little travelogue piece,” he says of coming out of a commercial break. “But here we do the reverse order: Come out, play the travelogue and then try to catch up with what we’ve missed. From that standpoint, it’s much more complicated.”

The good news is Roy says the world feed has tons of technology to ensure that those relying on it don’t miss anything.

“It has tracers and interesting graphics, the animations, super slo-mos, etc.,” he says. “It’ll still be terrific.”

All the efforts are an example of the relationship the NBC team has forged with CTV, European Tour Productions, and the R&A.

“We couldn’t do this with Hamish Greig [CTV OB CEO] and the team at CTV,” says McAllister. “They’re amazing partners to work with and it’s been wonderful. Also a big thank you to Toptracer, Hawk-Eye, ACS, and Mobile TV Group.”