Every Olympics provides the team at OBS (Olympic Broadcasting Services) an opportunity to take advantage of new technologies and give the production teams new storytelling tools that can help viewers understand various sports in a deeper way. The Tokyo Games are no different. Here are some of the top innovations to look for: 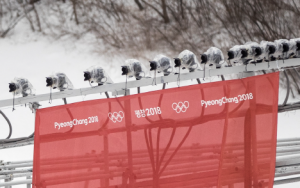 Hollywood-style replays will be part of the action at the summer games thanks to Multi-camera replays.

How does it work?

Relying on a myriad of high-speed 4K cameras, Multi-Cam Replay technology offers the ability to move around the action at any given point of time and watch it from a variety of angles, in near real time. Furthermore, the replay can be paused at different junc­tures in the motion. The effect is similar to action scenes in the movie “The Matrix” where the camera seems to pan 360 degrees around the main actor while floating in mid-air or dodging a bullet. At selected venues, between 60 and 80 4K cameras will be placed in selected locations for optimal viewing without obstruc­tions. Spaced at regular intervals on a rig structure, each camera is mounted on a robotic platform capable of precisely panning and tilting the camera in any direction. The camera’s zoom, focus and the platform’s pan and tilt capabilities are controlled from the production unit. For each replay, a single operator selects the point where the motion is frozen and can manipulate the replay from side to side around the athlete, as well as zoom in without losing resolution (thanks to the 4K resolution). Since the system simply stitches together these feeds and does not have to virtually create filler frames, no rendering is required, allowing Multi-Cam Replay clips to be ready in under five seconds. 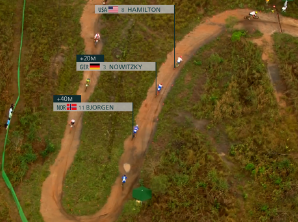 2D image tracking will make it easier to keep track of athlete positions on a course.

Where: Athletics Marathon and Race Walks, Cycling Road and Mountain Bike, Aquatics Marathon Swimming, Triathlon, Canoe Sprint, Rowing
As part of a new innovation for the Tokyo 2020 Games, OBS will provide more insight than ever before in selected sports/disci­plines by using video tracking technology to help commentators and viewers keep track of the position of the athletes throughout the event in real-time.
How does it work?
Compared to other athlete live tracking solutions that rely on GPS positioning or wireless equipment, 2D image tracking is based on advanced image processing technology that allows motion tracking. A ‘patch’ (a square) is defined on selected video frames in order to identify each of the athletes/boats. The computer then creates a ‘label’ that is attached to each of the identified athletes/ boats and that will be maintained even as the image changes. This captured data is then made available to a graphics rendering platform for on-screen presentation to the viewers, enabling them to know the exact location of the athletes/groups/boats. Additional data captured using more traditional GPS positioning can be combined with the ‘labels’ to identify athletes, their speed, distance to finish or relative position to the leader 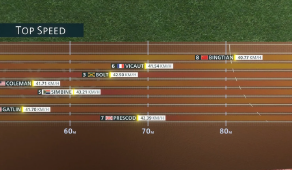 Intel and Alibaba are working together to bring 3D athlete tracking to the Tokyo Games.

It will provide an inside view into the results of a race and how Olympic athletes perform and compare against one another. Broadcasters will be provided with next-generation graphics showing a broadcast overlay visualization of the race with each runner’s sprinting speed at certain points in the race and additional race data. It will offer a more in-depth post-race analysis and reveal an extra layer that wasn’t evident during the race itself. For instance, viewers will be able to understand at what exact moment each sprinter reached their top speed and analyze the different phases of the race in detail through a colored visualization of changes in speed.

How does it work?
Four in-venue pan-tilt mounted cameras will be installed at the Olympic Stadium to capture live the sprint athletes’ performance. The 3DAT technology relies on massive computing power that can process large data sets. Using the speed of the Intel processors (hosted on Intel-based data centers in Alibaba’s cloud infrastruc­ture), OBS will be able to deliver this new analytical data as part of the multilateral feed within a fast turn-around time. 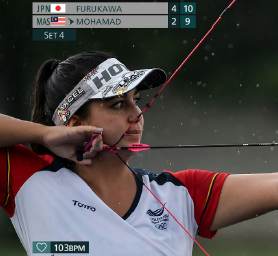 Panasonic is helping power biometric data gathering for archery at the Olympics.

What: Biometric Data Display
Where: Archery
Ever wonder what is happening inside an archer’s body when they are at full draw, shooting for a medal, without the slightest visible movement in their body? Now you will be able to find out as, for the first time at the Olympics, RHBs will be able to bring their archery coverage to the next level and reveal the inner workings of Olympic archers by displaying biometric data. In collab­oration with Worldwide TOP Partner Panasonic, OBS will rely on contactless vital sensing tech­nology to provide live heart rate monitoring.

How does it work?
Four cameras will be placed at approximately 12m from the athletes, focusing on their face and analyzing the slight changes of skin color generated by the contraction of blood vessels from the captured video. Audiences will be able to witness the heartbeat variations and adren­aline rush experienced by the archer’s body, as they shoot their arrow, through an on-screen graphic. 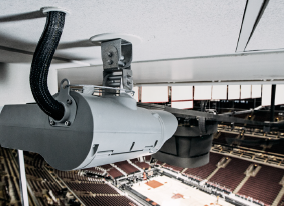 Intel True View will be used for all Olympic basketball games.

What: TrueView 360 video
Where: Basketball
Using Worldwide TOP Partner Intel’s True View technology, OBS will offer for the first time immersive replays for all basketball matches. TrueView builds three-dimensional (3D), 360° video through an array of cameras installed high in a stadium or arena.
How it works: In Tokyo, a total of 35 4K cameras will be mounted at the concourse level of the Saitama Super Arena to capture volumetric video that, once processed, renders 360° replays, bird’s eye views, stunning freeze frames and compel­ling stories from any perspective on the court. OBS will produce between up to 10 True View clips for every b 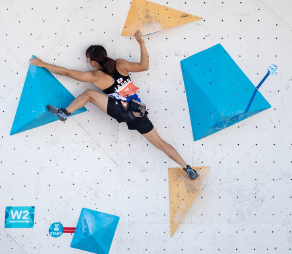 What: Virtual 3D Graphics
Where: Sport Climbing
Making its Olympic debut at Tokyo 2020, Sport Climbing takes the challenge of scaling steep ascents to a whole new level. Using a range of hand and foot holds of different shapes and sizes, climbers put their skills and strength into practice on a wall measuring either 15m in height (Speed and Lead) or 20m in width (Boulder). To help audiences understand the challenges faced by the athletes and get insight into how they solve problems, innovative, computer-generated graphics will enrich the coverage of this new Olympic sport.
How it works: OBS will create a 3D representation of the holds and walls, creating a virtual world that looks more real than what a camera could capture. This 3D model allows for detailed analysis of the wall’s angles and holds and give viewers a hint of what it might feel like to tackle the ever-changing challenges on walls. Augmented Reality (AR) technology will be used to switch between the (real) camera shots and this virtual world at any given point of time, as well as generating virtual data about the holds, the wall’s varying angles and the routes. In this virtual world, one can zoom in at any time, with a very close-up look at a tiny detail on the hold, while at the same time also zoom out to assess the wall in its entirety. Virtual 3D graphics technology will provide commentators with access to a huge amount of analytical data, enabling them to explain to their viewers what goes on in the athletes’ minds when progressing on the walls.