Two-thirds of sports fans in the United States now want to watch sport exclusively on streaming services, with half of those ready to pay up to $10 per month, according to Grabyo’s new 2021 Sports Video Trends Report. 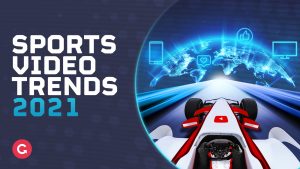 Grabyo surveyed over 15,000 consumers across 14 countries to identify the video viewing and purchasing habits of global consumers. It found that over one third of consumers are watching sport regularly across broadcast and digital platforms.

The report’s findings show sports fans are growing impatient with the lack of streaming options, suggesting that fans either expect more sport to be available on streaming services in the future, or may choose not to watch live sport if it is only available through broadcast TV subscriptions.

In 2019, Grabyo found that 53% of global sports fans that pay for video services were planning to cut the cord and switch to streaming exclusively by 2024.

In 2021, 45% of fans are only paying for streaming services. By 2026, Grabyo’s report suggests that the pay-TV market will only have a 28% customer share of global sports fans.

Globally, 79% of sports fans report they are ready to switch to online streaming only for sport.

These findings reflect a global trend of consumers adopting streaming services in favour of broadcast TV subscriptions, which has been accelerated by stay-at-home safety measures during 2020. This led to consumers across age demographics experimenting with streaming services and being convinced by their value. Grabyo reports that half of global sports fans surveyed are over 45 years old.

“Broadcasters and sporting rights holders must act fast to align their video strategies with consumer demand”, comments Mike Kelley, President of Americas at Grabyo. “ Just as live sports drove the growth of traditional cable and satellite subscriptions for decades, it is now powering OTT offerings like Amazon Prime, Peacock, Paramount+, and YouTubeTV, in addition to sports specific products like DAZN & ESPN+. Fans appreciate the ability to watch on mobile devices, as well as compelling interactive features, such as multi-camera feeds, live betting, fantasy stats, and e-commerce.”