The franchise plans to bring back on-court activations soon

In Minnesota, basketball is a year-long activity, and with the NBA’s Timberwolves and the WNBA’s Lynx, hoopers flock to the Twin Cities. The two franchises provide the production team at the Target Center ample opportunities to develop new ideas, but, after COVID-riddled 2020 seasons, the Lynx crew is tapping into lessons learned during the Wolves schedule.

“We started Timberwolves season without any fans in the building, but by the end, we were close to 2,000 fans in the building,” says Alyse Danikowski, manager, game production, Minnesota Lynx. “Since we went months of entertaining only ourselves on the videoboard, we went through the whole process of remembering how to put on a show for spectators again. 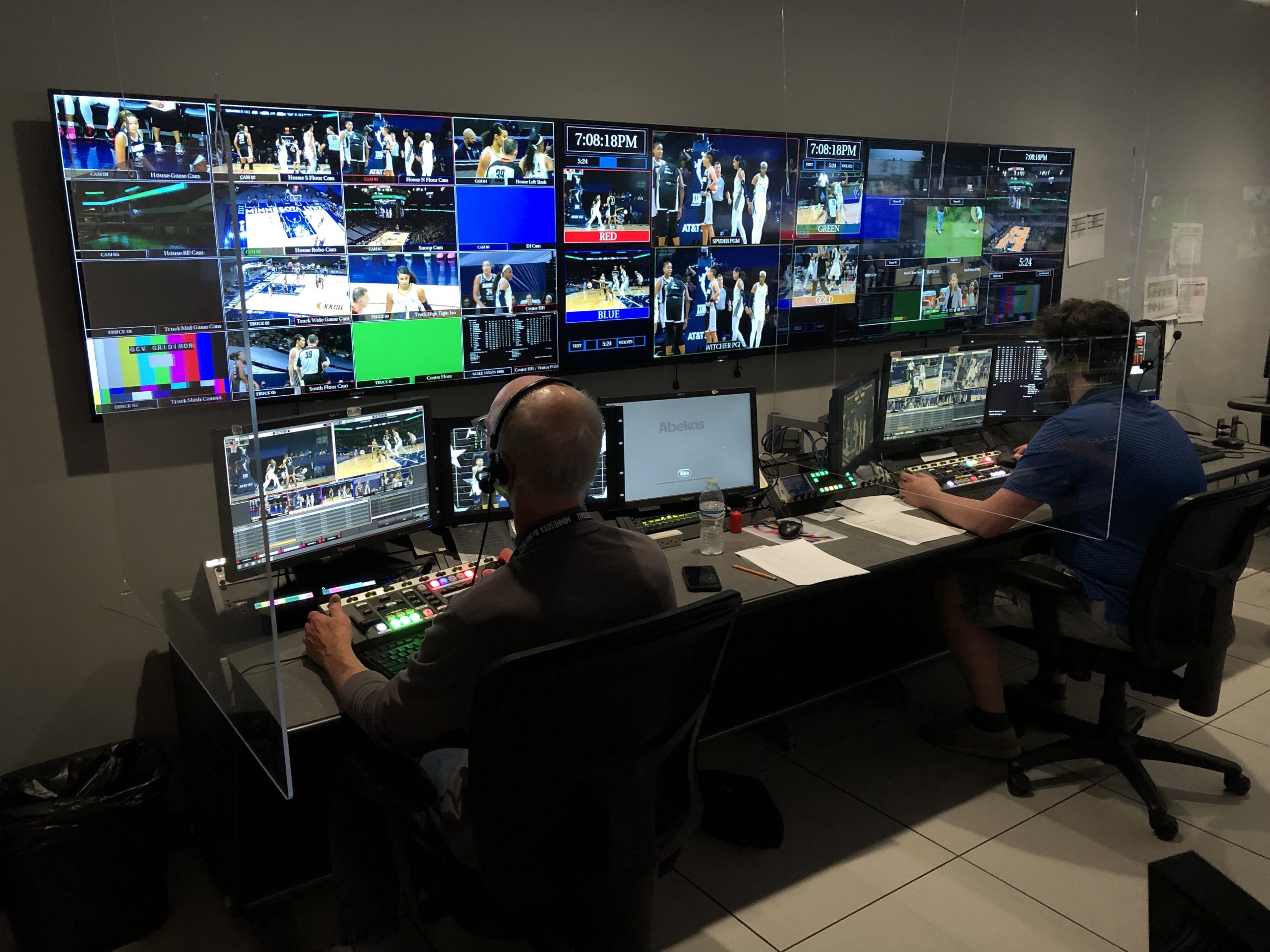 When the sports calendar rolls to spring, the basketball world breaks into a frenzy. With the NBA season’s delayed start, production teams were struggling to balance the content for the two leagues. At the tail end of the Timberwolves schedule, Danikowski and company faced an onslaught of games kicking off the 2021 Lynx campaign at Target Center. The week after the Lynx’s first preseason game on May 8, a tough stretch of contests began.

“We had a really crazy period when we had a Wolves game on Thursday, a Lynx home opener on Friday, and then Wolves games on Saturday and Sunday to end the season,” she says. “We tried to get ahead of what we could by working long hours for a couple of days, so it went pretty smoothly. We had a couple of videoboards behind the benches for the Wolves season and had to design content for the first two Lynx games before those were taken out.”

Two professional teams in one building can get a bit complicated, but one of the many blessings that comes with such a situation is leveraging the production crew. The organization is able to bypass some of the effort of bringing new crewmembers up to speed. Given the nature of professional sports, there isn’t much of an offseason in Minnesota. While other production teams get a chance to be away from the control room, this Minnesota-based team gets extra work.

“We’re really lucky to have the same incredible crew for Wolves and Lynx,” says Danikowski. “There’s usually a period at the beginning of the season when you’re trying to get back into the flow of brainstorming and creating [ideas], but we don’t have that since we’re going from one season into the other.” 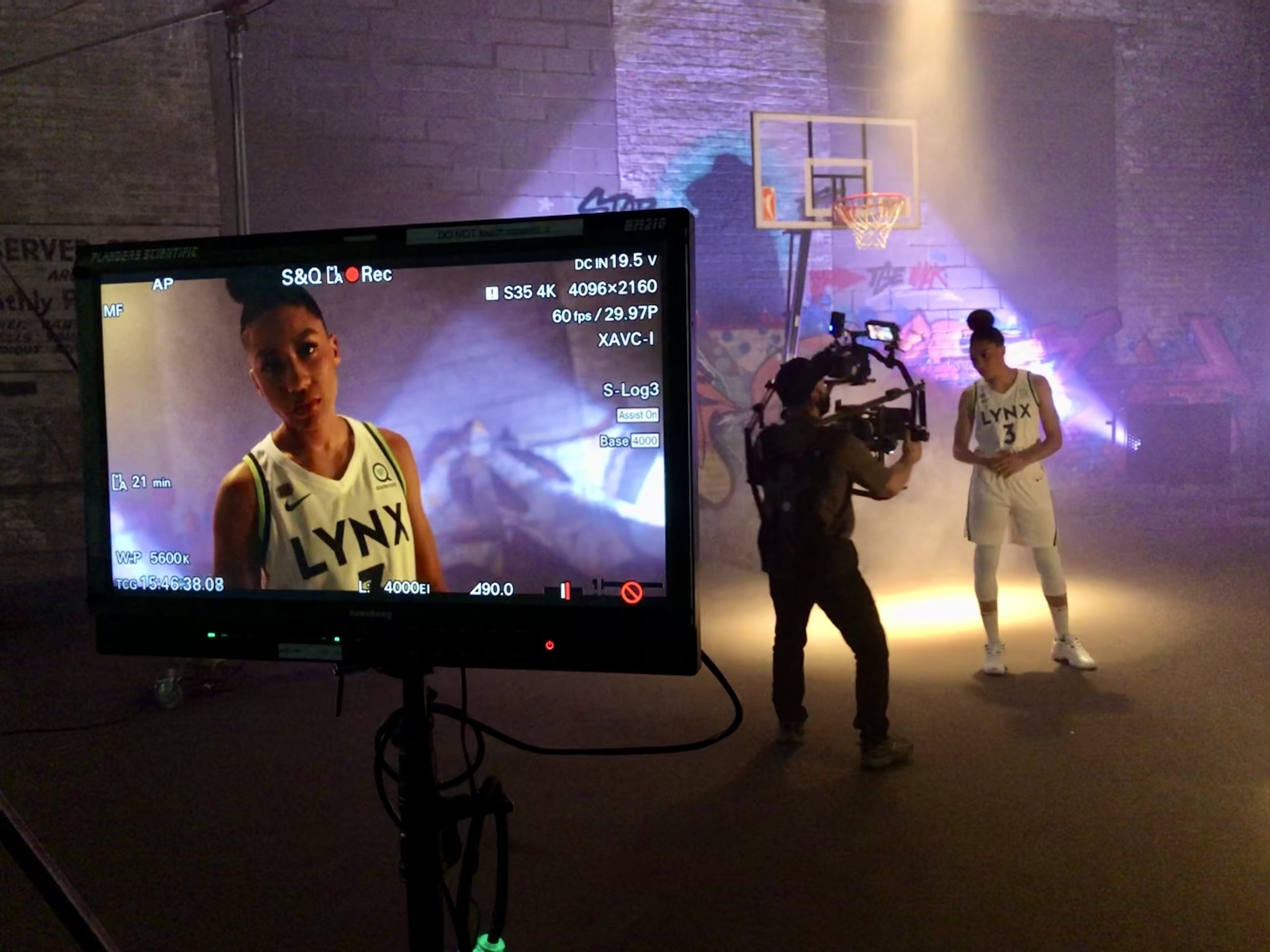 Newly acquired Aerial Powers on the set of Media Day

With many lessons learned from the WNBA’s “Wubble” season last summer and the recent Timberwolves schedule, besides having the same production crew, the Lynx are set up for the most success possible under today’s unique circumstances. In terms of content for the videoboards at Target Center, the Lynx team operates with a full day’s worth of video and still photos. Since COVID-19 restrictions are still hindering immediate access to players, preseason Media Day was one of the few opportunities for content-gathering. Although this year’s shoot didn’t include impressive shots from a drone, the staff still created a dramatic environment at Target Center for eye-popping material.

In the venue, the crew is using Media Day content to generate intro videos and headshots and is implementing that into the daily rotation on game nights.

“We haven’t gone into the realm of live entertainment in our building yet,” notes Danikowski. “We’re still showing a lot of throwback and previously recorded performances at halftime and quarter breaks. We still have our mascot, Prowl, on the same stage that we had [the Timberwolves’] Crunch, and, since we have a lot of new players in the offseason and through the Draft, we’re doing a lot of player features.”

The Ones Who Get It Done: Shoutout to the Minnesota Lynx’s Production Team 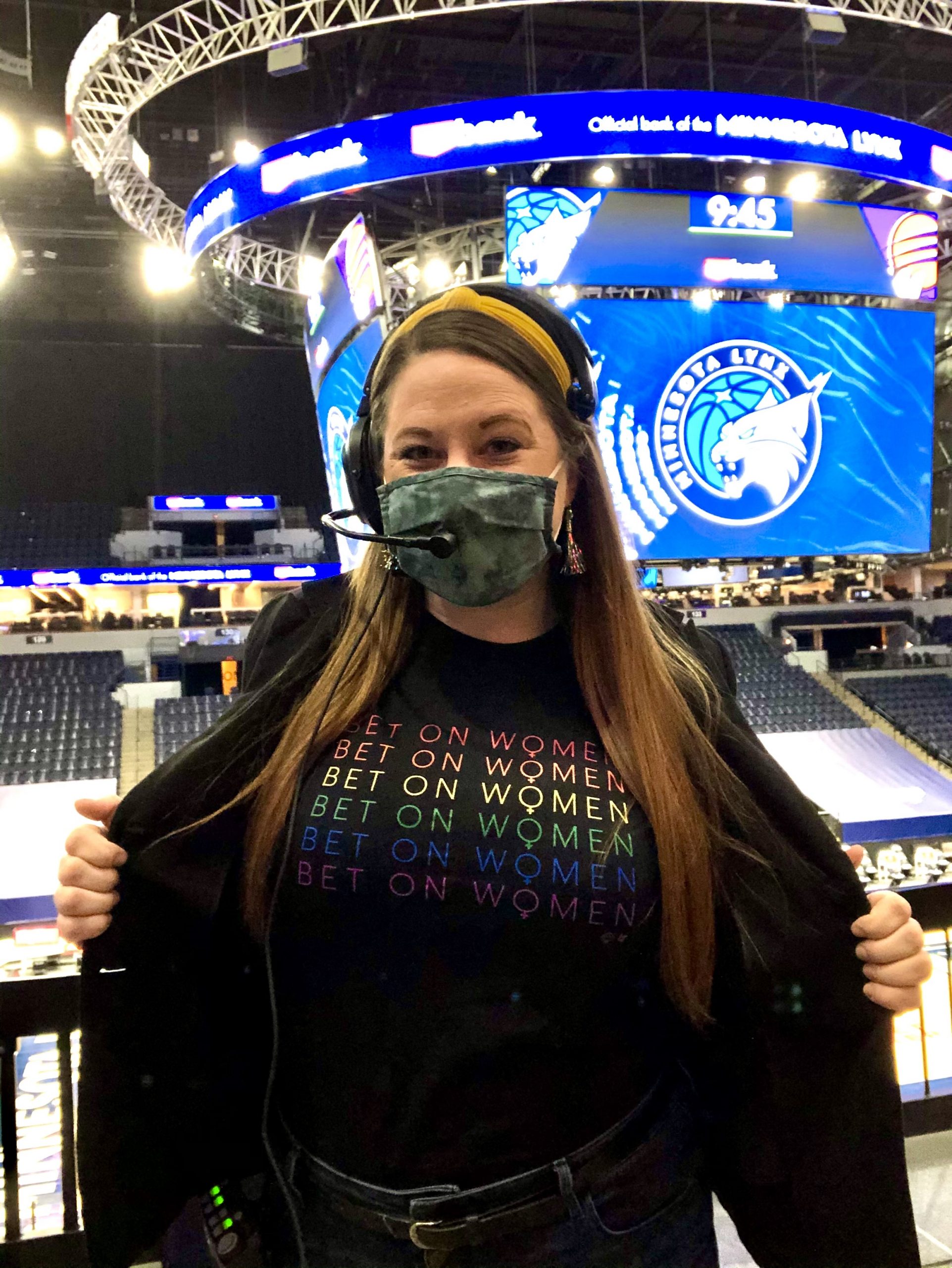 Minnesota Lynx’s Alyse Danikowski poses before the team’s home opener vs. Phoenix on May 14.

Although the production plan has been without many real-time elements, the strategy is to improve by the time the season resumes after the Olympics break. Until then, Danikowski; Senior Manager, Game Entertainment, Sheridan West; Senior Animation and Video Features Producer Josh Harms; and Animation and Video Feature Producer Maggie Frost will spend the rest of July and the first couple of weeks of August to recharge, reset, and get ready to deliver high-quality shows of the four-time WNBA Champions.

“Our team is extremely good at what they do,” Danikowski says. “I’m blessed to work where I do and with the people that I work with.”

The Minnesota Lynx will kick off the post-Olympics part of the season with a home game vs. the New York Liberty at Target Center on Saturday, Aug. 15 at 7 p.m. ET.