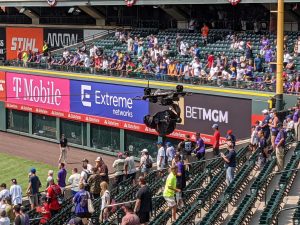 Operating from its flagship HD21 mobile production unit, the CP Communications crew provided support for the Home Run Derby on July 12 (ESPN), the Red Carpet All-Star Show at McGregor Square on July 13 (MLB Network), the All-Star Game on July 13 (FOX), and the three-day MLB Draft at the Bellco Theatre in Denver that started on July 11 (ESPN and MLB Network). CP also assisted with on-site studio shows for all three networks, including ESPN’s Baseball Tonight and FOX’s pregame show, which were setup in various locations across Coors Field. Other key clients serviced include ESPN Radio, Sirius XM Radio, and the MLB Commissioner’s Office.

“We had our own all-star crew of 23 on site that was truly second to none,” says Michael Mason, president of CP Communications. “Over four days, we coordinated between 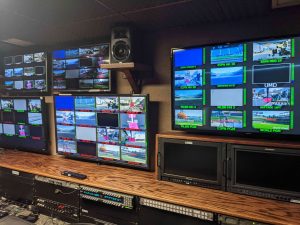 three networks in multiple venues producing event coverage plus regularly scheduled network programming. Coordination was an essential part of our game plan. The All-Star Game is one of the most high-profile events in professional sports, and we delivered high-quality support for all of our clients.”

CP’s support included 16 RF handheld cameras, including two FlyCam systems, two “Megalodon” Sony cameras (with shallow depth of field), a Sony HDC-P50 compact POV on a MōVI camera rig, a SteadiCam, and batting cage POVs. CP added 60 wireless microphones that were used throughout the events by reporters and other on-air talent, plus umpires, coaches, and players. Some mics were even planted in the ground to capture game audio and effects.

“The TV transmitters installed on mountains around Coors Field can create challenges for wireless productions,” adds Mason. “Before the action, we performed accurate site surveys and current spectrum scans so we could deliver reliable wireless video and audio signals.”