As we speak, the Olympics are kicking off without fans and already we know ratings are down significantly – just like the Stanley Cup, the NBA Playoffs, and the Super Bowl. It’s now my strong belief that fan-less stadiums has had a massive negative impact on sports TV ratings, if not sports more broadly.

It’s not just that the TV product is inferior, although it is. It’s that it creates a vacuum of FOMO. We know literally that no one else will be at the game. That brain worm starts a negative feedback loop on our collective attention span that, in my view, has had a hugely under-estimated impact on media consumption. Covid has increased humanity’s isolation.

And so, as sports’ power to draw a mass audience at a live event declines, and as the TV bundle – including Regional Sports Networks – re-organizes itself around higher-priced direct-to-consumer offers, (see this article about a rumored $23 per month RSN price point,) I’m getting increasingly concerned about the possibility of what I’ll call casual streaming piracy.

In short, your average teenager can now spin-up a cloud desktop, establish a sophisticated interactive viewing experience with free open-source software, and share it (freely) over a secure VPN to friends and family around the country. Some adults can do it, too, and all of it is in large part due to the explosive and innovative Twitch streamer ecosystem with a tsunami of Zooming and video calls thrown in. And it’s not clear to me where the line should be drawn between fair use, rights to privacy and rights to monetize the intellectual property.

How many US internet users know what a VPN is?

The answer is ~48%. (We break down that number into usage versus awareness – the data is in the report.) And 48% is a high number for an obscure technology, making it fertile ground for the kind of casual sharing of content that we may never be able to stop. (And we shouldn’t violate consumer privacy rights trying to, in my view.)

If content sellers are going to make their experiences frustrating on any dimension – too many ads, too high a price, another app to download – it’s not going to work out well for them.

Survey also shows challenges for monetization via advertising and betting.

Granted, these are complex topics and my report’s next datapoint – Ring’s “Suggestion Box for TV” — should be interpreted carefully. (The data, precise wording & sample information is provided on the slide. I presented six total choices as three pairs. I allowed respondents to select as many as they wanted to. Most selected one. And finally, I ran multiple samples with precisely randomized ordering so that every possibility of the three pairs were shown in a randomized way.)

Here’s how it shaped up: 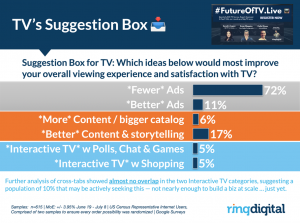 Consumers really don’t like ads. 72% selected Fewer Ads more than anything else, and given my question design, it’s the gap that’s most interesting to me. It’s just such a dominant idea in consumers’ minds. It’s far and away the most obvious thing we need to fix. And thankfully, the Connected TV and Free Ad-based Streaming TV (FAST) ecosystem are going to help make that happen.

When it comes to simple concepts around Interactive TV, there was almost no overlap on these two selections suggesting 10% of the audience has organic demand for that. I’ll focus more deeply into sports betting in my Fall report, but if sports betting is the path forward for the RSNs, the lack of organic demand for even the free interactivities such as polls, chat, and games – seems worrisome to me, if we think we’re going to monetize it.

Interactive Upside? QR Codes! One thing that might change the calculus on the limited organic demand for interactivity is the strong growth in QR Code awareness and usage amongst everyday consumers. 57% of them now know what QR Code is and how to use one, up from 56% in April and 51% in January.

But what’s more fun is cataloging their use on Twitter. (See graphic.) It’s been fascinating to see the beginnings of what I believe will be an explosion of executions in the coming year. You heard it here first!

Author’s note: Please join me and Colin Dixon of nScreenMedia this Thursday July 29th as we chat with two extraordinary executives Sandra Lopez GM & VP of Intel Sports as well as Evan Shapiro, the Peabody Award winning creative executive that brought Portlandia alive on IFC. For more on the topics and access to my entire research archive, simply register at #FutureOfTV.Live. 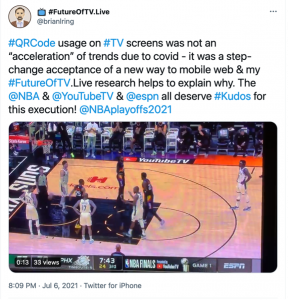