The event returns to Barclays Center after the pandemic

At tonight’s NBA Draft, ESPN will take a page from its NFL Draft playbook and, for the first time, simulcast its Round 1 coverage on both ESPN and ABC. Although it will be ESPN’s 19th consecutive NBA Draft telecast, it will be the first that ESPN offers viewers in two parallel broadcasts. 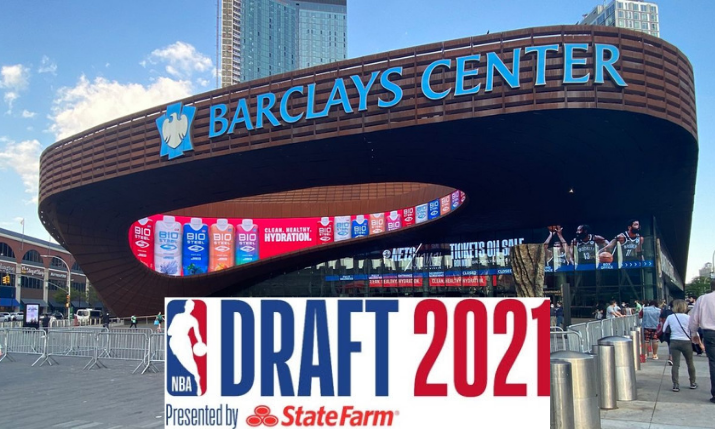 ESPN has tapped Senior Operations Manager Steve Carter, a veteran of many NFL Draft broadcasts, to oversee the operation at the Barclays Center in Brooklyn. Tonight’s production marks the Draft’s return to Brooklyn — its home since 2013 — after the pandemic forced last year’s event to be held on ESPN’s Bristol, CT, campus.

“It’s exciting to be a part of something new with the [dual broadcasts] ,” says Carter, “and I think it’s going to be really great for the fans. Also, I think that anytime we can get back to doing our business as normal is a good thing. Getting the Draft back at Barclays is great. It’s a big step towards getting back to normal, which I know we’re all looking forward to.”

Although ESPN has provided dual broadcasts of the NFL Draft since 2018, simulcasting coverage on ESPN and ESPN2, tonight will mark the first time the NBA Draft has received the simulcast treatment. ESPN has rolled out four mobile units at Barclays, with Game Creek Video 79 (A and B units) dedicated to the ESPN broadcast and Pride (A and B) handling the ABC show.

On ABC, SportsCenter anchor and college football/basketball host Kevin Negandhi will host the coverage alongside NBA analysts Jalen Rose and Chiney Ogwumike and NBA reporter Malika Andrews. The panel will celebrate the prospects’ journeys to the biggest stage in basketball. Andrews will conduct one-on-one interviews with draftees following each team’s selection (20 prospects are expected to appear in person).

The ESPN and ABC sets will be located in front of a newly designed LED stage backdrop that will serve as the canvas for the night’s festivities.

In addition, Miles Brown, actor/rapper/dancer and star of ABC’s black-ish, will provide “backstage” access throughout Round 1 as an ABC Draft correspondent.

Both telecasts will begin with high-tech animation scored with original music by rapper Benny the Butcher, embracing the rap style of the early 2000s.

For the simulcast coverage, ESPN has rolled out roughly 50 cameras, most of them shared between the two productions. The complement inside Barclays includes nine robos, 13 roving RF cameras (including two Steadicams, five jibs with virtual-graphics capability, and an 8K shallow–depth-of-field camera), and a three-point aerial camera system.

ESPN also plans to mike up four prospects and will have dedicated robo cameras deployed at their tables to capture behind-the-scenes content as they wait to hear their name called.

In addition to coverage inside Barclays, ESPN has deployed cameras to capture shots of the Brooklyn Bridge, Times Square, and the NYC skyline, including a jib atop the roof of the Pier 17 at the South Street Seaport complex, where ESPN’s Seaport Studios are located.

Virtual graphics and augmented-reality elements will play a major role in tonight’s broadcast, with virtual banners and placards integrated into the show throughout the night. ESPN has outfitted five of its RF jibs, three additional jibs, and the aerial camera system with virtual-tracking technology to incorporate these elements.

Additionally, new high-end custom graphics and scores of personal player features will debut during the event.