Keith Wells, founder of STNVideo and now MXZN, was at the 2012 Paralympics in London when he saw a problem that needed to be solved: athletes from countries would walk into the mixed zone but no one was there to interview them. “I thought it would be great if there was a place where every athlete from every country could step to a multilingual device [and record something for the media at home],” he says. “And over the past 18 months it became relevant and began to make perfect sense.” 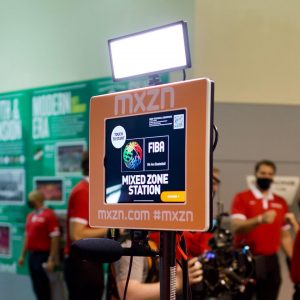 The MXZN station is designed to make it easy for athletes to connect to media back home after an event.

The result was on display at the FIBA Men’s Basketball Olympic Qualifying Tournament that was recently held in Canada. The system allowed athletes and coaches to step up to it and then record answers to questions or comments that can then be made available to media around the world within minutes. MXZN was also used at the America’s Cup in New Zealand and the Canadian Olympic swimming trials.

“FIBA is looking to deliver content to media in the various countries that took part in the tournament,” says Wells. “An athlete steps up and can see the prompts in their language and then record. It’s easy to use, has high-quality recording, and gets turned around quickly.”

Wells says the system includes Apple iPad Pros that are “smoking fast” and have 5G capability.

“We use Facetime’s Center Stage functionality to keep the athlete in frame,” he says. “Center Stage can also do a soft zoom out if there is a second person and then it pushes back in when the person leaves. It’s really amazing technology.”

With the addition of some custom designed components the iPad pro is easy to raise and lower and then software developed in Canada and India offers a simple interface so that the athletes could use it on their own. 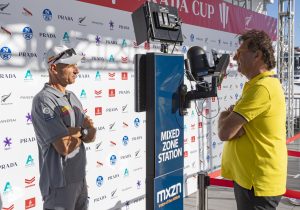 At the America’s Cup in New Zealand MXZN allowed for Francesco Bruni (left) to be interviewed by media from Italy.

“A new posting is available to the media on our platform within three or four minutes of recording with a custom overlay,” explains Wells. “And we have a number of clear paths to monetize this as the content is highly valued by major brands who want brand visibility. We are trying to be loose with monetization ideas.”

As for the future, Wells envisions an AI-driven interview appliance where someone steps up, sees questions on a screen (or possibly even live face to face with the interviewer).

“There are three things that pop out to me,” says Wells. “Sports reporters aren’t covering things like they used to because of staff and budget cutbacks. Also, the leagues are creating more content by themselves, and social platforms are also generating content. And third, this is about giving athletes who would never be interviewed a chance to offer comments that are relevant back in their home markets. We want to give more athletes a voice.”