Audio-Technica is serving as sponsor of the Relix Studio, the newly revamped live streaming facility run by Relix magazine. As part of this sponsorship, A-T is the exclusive supplier of headphones and microphones for the studio, which is located in the historic space once occupied by the club Jazz Standard in Manhattan. The Relix Studio hosts bands weekly to film live performances, interviews and other content that will stream on various platforms including a new Relix Twitch channel, Fans.live, and Facebook Live and be archived on YouTube. A-T mics and headphones will be used throughout the studio and recording process. 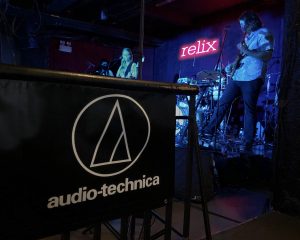 Jesse Lauter, producer of the magazine’s flagship live music program Relix Sessions, who has worked with artists such as the Tedeschi Trucks Band, Stephen Stills & Judy Collins, and Scarlett Johansson, notes, “I love Audio-Technica mics. They’re total workhorses while they sound absolutely natural. And, I just know that I can get a lot of mileage out of their microphones for something like our online music series. I might normally be hesitant as an engineer to say that one brand is the exclusive mic for a major production across the board, but with A-T there are just no issues whatsoever. We’ve been up and running for several months now, and I couldn’t be happier with the A-T products. I take the multi-track audio that we capture at the studio and take it to my personal facility to fine-tune the mixes – there is something about the way that these Audio-Technica mics capture the audio that makes it particularly easy to mix. I’ve learned a lot about these mics already, and these are tools that I plan to start using outside of this studio. So far, we’ve been using the AE3000 and AE5100 on guitar amps, ATM250 on kick drum, ATM650 and AE2300 on snare, ATM230 on toms, ATM450 on hi-hat, AT4051b on overheads, ATM350 for piano, acoustic guitar, horns, and more. Artist response has been great too, in particular to the AE4100 vocal mic. All of these mics result in a very natural sound.”

Audio-Technica Marketing Director Gary Boss remarks, “Relix is a giant in the music scene since 1974, and they continue to be on the cutting edge in so many ways. And now with their revamped facility, they’re one of the first legit music spaces to have their own Twitch channel, which suggests to me how forward-thinking and hip they really are. So, it aligns with Audio-Technica’s roots as a well-established company that continues to innovate and push the envelope.”

Lauter is equally pleased with Audio-Technica’s support on an organizational level. “A-T has been incredibly generous and just a pleasure to work with,” he adds. “I’m really impressed with what they offer. And now that I know first-hand what these mics can do, it’s all the more surprising to see their price points. These are high-performance tools that are tremendously cost-effective. A-T is the real deal. I strongly recommend that anyone, whether you’re a studio or live engineer, to get a bunch of these mics in your arsenal. They’re doing something very warm, rich, natural-sounding and versatile. Relix is known as the ‘jam band magazine,’ but obviously we deal with all sorts of music here – indie pop, rock bands, Americana and folk, singer-songwriters, huge eight-piece funk groups with horns, and so on. I can literally take this setup and basically keep it standard from show to show with similar input lists. It translates amazingly well from artist to artist, which just makes our job easier.”