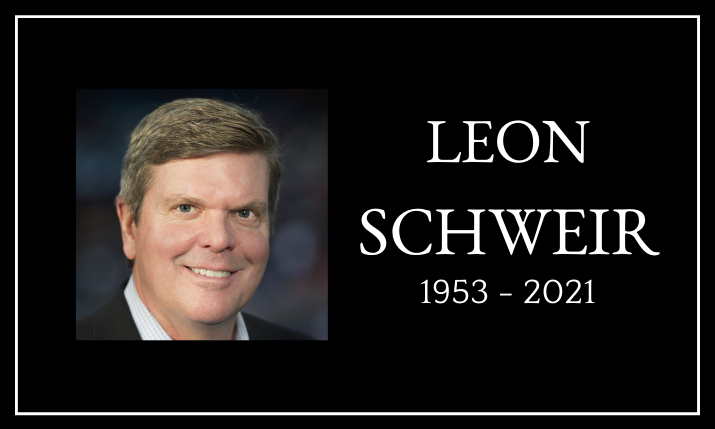 Leon Schweir, a highly-esteemed sports-production industry exec and veteran of NFL Media, Pac-12 Networks, Versus Sports Network, Big Ten Network, and MSG Networks/Fox Sports NY, died last week at his home in San Francisco. He was 68 years old. One of the most respected production and operations executives during more than four decades in the sports media industry, Schweir played an integral role in the launch of Pac-12 Networks and Big Ten Network.

Most recently as VP of broadcast operations for NFL Media, he played a key role in NFL Media’s move to the new LA Stadium and Entertainment District (The District) at Hollywood Park. Dave Shaw, VP, Head of Media Operations, NFL Media, comments:

“Leon Schweir had a great mix of production sense with technical awareness, and overall a charm that warmed people. He will be missed.”

At Pac-12 Networks, Schweir was responsible for event, studio, and digital content, including 850 live events and was part of the networks’ original launch team. From 2012-2018, he oversaw the engineering staff that originated the first full-IP production network, garnering IBC Finalist for Tech innovation and an Emmy nomination for the technology. While at Pac-12 Networks he helped to develop the “at-home” or REMI-production model that is now widely used across the industry.

SVG was shared on an internal statement that was emailed to Pac-12 Network staff. That statement read:

“His legacy lives on through the many lives and careers he impacted.”

The Pac-12 Networks family mourns the loss of our friend and former SVP of production and digital content, Leon Schweir. pic.twitter.com/fHgeB3iVW5

Prior to Pac-12 Networks, Schweir was SVP, production planning, and SVP, production, Versus Sports Network and Comcast SportsNet, in charge of studio and remote productions that included NHL, Tour de France, and NBA D League.

Previous to that, he was executive producer/VP, production, Big Ten Network, overseeing studio-, remote-, and technical-operations teams and playing a key role in the successful launch and creation of a full-HD server-based studio facility.

"He is responsible for so much of what our network was and has become."@BTNMikeHall remembers Leon Schweir, @BigTenNetwork's original executive producer, who died last week. pic.twitter.com/aSk4gbFqQm

He had also served as executive producer/VP, programming, MSG Networks and Fox Sports NY, responsible for production and programming of two regional networks and live coverage of more than 300 sports events per year. Schweir was honored by YES Network for his many years in New York regional sports production during Tuesday’s Yankees-Red Sox broadcast:

Schweir is survived by his son, Richard, and daughter, Christina. A memorial service will be held at Green Street Mortuary (649 Green St.) in San Francisco on Aug. 26 at 12:30 p.m. PT. For those that want to celebrate and remember his life, please join either of the following links for a live viewing on Thursday, Aug. 26 from 3 to 5 p.m. ET: https://pac-12.zoom.us/j/93607938650 or http://surprisinglywatchable.com. In lieu of flowers, donations can be made to the US Soccer Foundation at ussoccerfoundation.org.