In March 2020, all six professional leagues in the United States — Major League Baseball, National Football League, National Basketball Association, National Hockey League, Women’s National Basketball Association, and Major League Soccer — underwent a period that has never been seen before in the history of televised sports. From fake crowd noise and the heavy reliance of pre-recorded content to safety protocols, like tiered systems, and short-handed teams in the control room, the era of productions within empty stadiums birthed lessons that will withstand the test of time. Over the past year, SVG spoke with 71 franchises about how they developed an entertaining strategy for fans watching at home and how it changed throughout the course of the COVID-19 pandemic. 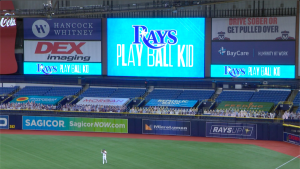 Fans were displayed on the videoboard before and during games at Tropicana Field.

Although Major League Baseball continued with a 60-game regular season, the pulse of what makes professional baseball exciting remained at home. SVG’s At the Ballpark took you behind the control room door and broke down what it was like to produce a fan-less venue experience. 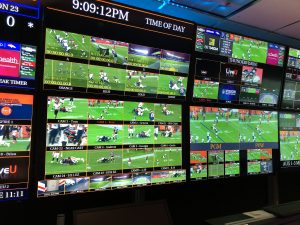 Inside the control room at Empower Field at Mile High during the Broncos’ Week 1 opener.

Many professional sports opted for a return to play inside a sanitized bubble last summer, but without skipping a beat, the NFL soldiered on with regular-season games in all 30 stadiums across the country. SVG’s On the Gridiron examined the new routines, habits, and production philosophies of in-venue personnel on any given Thursday, Sunday, or Monday. 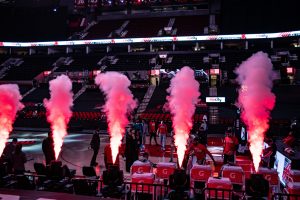 Despite the fan-less arena, the Trail Blazers production provided pregame elements, including smoke during player introductions.

The tail end of 2020 into the beginning of 2021 still presented challenges to in-venue production teams. Playing outside of the Orlando bubble, SVG’s On the Hardwood examined the hardships, creative ideas, and teamwork of NBA organizations at their respective home arenas. 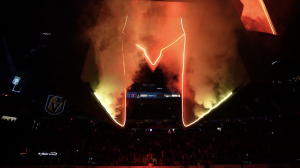 In-venue elements were continued without fans in the stands, including the lower