Erected and opened in the 1920s, Darrell K Royal–Texas Memorial Stadium is a reminder of the historic college-football legacy at the University of Texas. To capture the passion for the burnt orange and white, the institution announced a massive expansion of the south end zone in May 2019. Nearly two years and a pandemic later, the athletics program is ready to welcome back fans in this new section and begin a new era of game days in Austin.

“This is the first time in the history of Darrell K Royal–Texas Memorial Stadium that the full building will be enclosed by a bowl,” says Drew Martin, executive senior associate athletics director, external affairs, University of Texas Athletics. “The way this was constructed keeps the crowd noise in and brings the videoboard closer to the action. Those will have an impact on game day in terms of a home-field advantage.” 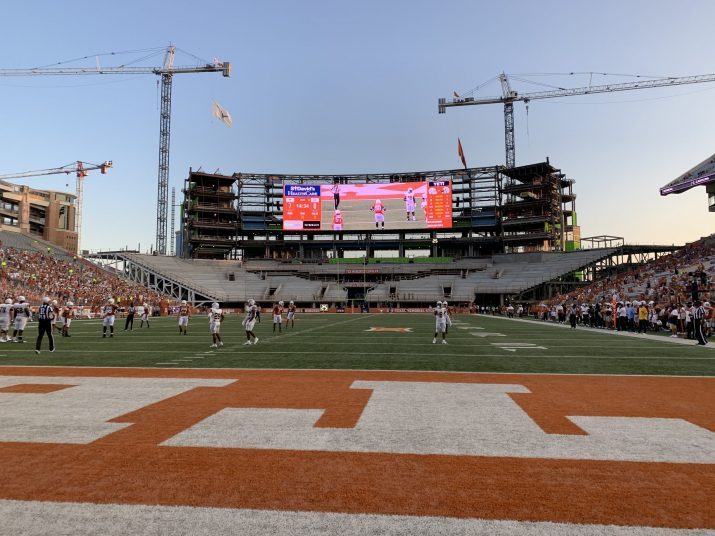 Darrell K Royal-Texas Memorial Stadium will be fully enclosed for the first time in its 97-year history.

Although the stadium is impressive by itself, the multimillion-dollar south-end-zone expansion will have bigger and brighter details that will be highlighted on any given Saturday. Similar to the north-end-zone project, which upgraded in-venue elements, this initiative includes a videoboard that will enhance the material consumed by fans in the stands. In 2017, ANC was chosen by the university to replace its “Godzillatron,” a screen that has dazzled fans for numerous seasons. Now in its fourth season, the 55.85-ft.-high by 134.38-ft.-wide structure occupies more than 7,505 sq. ft. of real estate and has 2,723,840 physical pixels.

Heading into 2021, the UT athletics program dealt with a handful of logistical challenges over the course of construction. The crew was able to power through the COVID-19 pandemic, but the out-of-nowhere elements of the winter storm in February halted progress. Aside from the inclement weather, the institution needed to figure out how to implement this pre-existing fixture in the grand plans of the new expansion. With a multi-tiered building being added behind the stands for upscale viewing areas, the technological team rearranged the panels to cover the width of the edifice.

From a production perspective, the staff needed to rethink the way to capture and construct content. Instead of a typical video that has the luxury of vertical space, the crew is deploying a more horizonal, 16:9 style. Formerly at Auburn University, Jeff Hanel was hired over the summer to run this operation as director, creative video.

“The panels had to be reconfigured for a wider format,” notes Martin. “With more video windows, we’re able to do a lot more statistics and information for fans but also focus on going super-wide with some of our intro videos and impact moments that we have planned throughout the game, as well as inserting some side-by-side replays. We were conscious about how we produce our in-game presentation.” 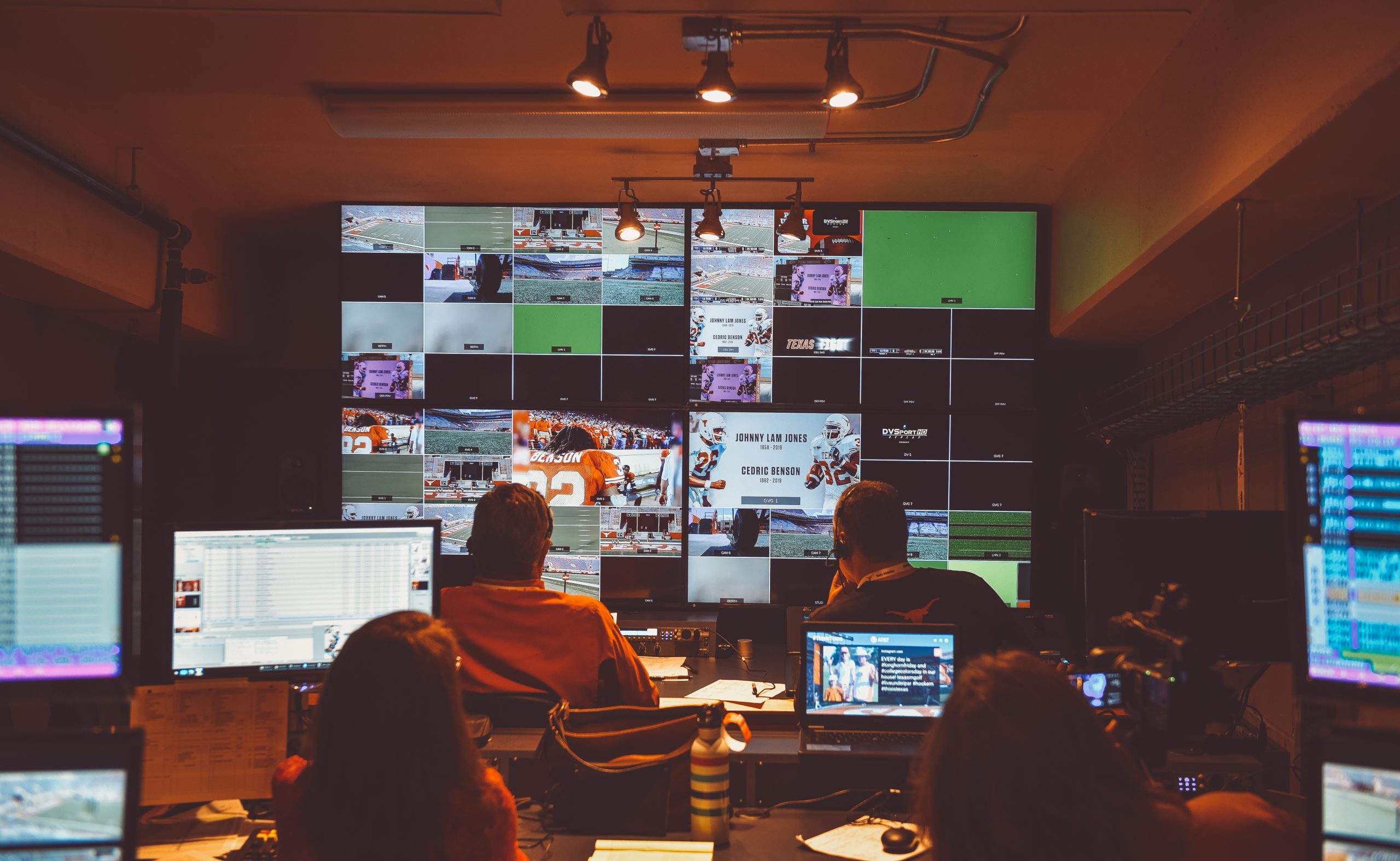 Student-based BVP produces the videoboard show on the west side of the stadium.

Along with the new-look videoboard, the physical appearance of the expansion will automatically improve the in-game atmosphere. College football is known for elaborate entrances, but, in Austin, the players will run out of a gigantic Longhorn silhouette onto the field. Other prompts and activations will accompany this part of the show.

“We’ll have some fun bells and whistles that go along with [the team running out to the field], like our work with air gas for smoke and Bevo running onto the field,” adds Martin. “We’ll also have LED lighting around the silhouette where we can do different things depending on the scenario of the game.”

In addition, an adjacent building on the south side of the stadium also received technological upgrades that will enhance the game-day experience. Displays in the Moncrief-Neuhaus Athletic Center and certain areas in the stadium, such as club and loge spaces, will have messaging streamlined through a new IPTV system provided by VITEC.

Another expansion was taking place alongside the work being done at Darrell K Royal–Texas Memorial Stadium. In 2019, Bevo Video Productions (BVP), a joint effort of the athletics department and Moody College of Communications, was created to provide more creative opportunities for students pursuing a degree in live production. Onsite crowds will finally get to experience the work of this crew, working inside the stadium.

“We built out two control rooms on the west side [of the stadium] in pre-existing spaces,” says Martin. “In other spaces that became vacant due to the expansion, we were able to move some of the video operations in for football. These spaces already have built-in connectivity, so we’re able to own our in-venue content at all of our other venues.”

This program is critical to the students’ future success, but BVP is also driven by on-campus faculty and staffers of Earl Miller Productions (EMP), which has been the main provider of onsite mobile production units for all productions of Texas Longhorns athletics. The operation now has a permanent space, and, with a high-profile canvas to work on, the students get the experience needed to become full-fledged professionals after graduation.

“This project went hand in hand [with the work being done at the stadium],” Martin explains. “It’s an opportunity to not only move away from using production trucks to centralize our operations but also to give our students real-world experience.”

A New Standard: Texas Prepares for Future of Longhorns Football 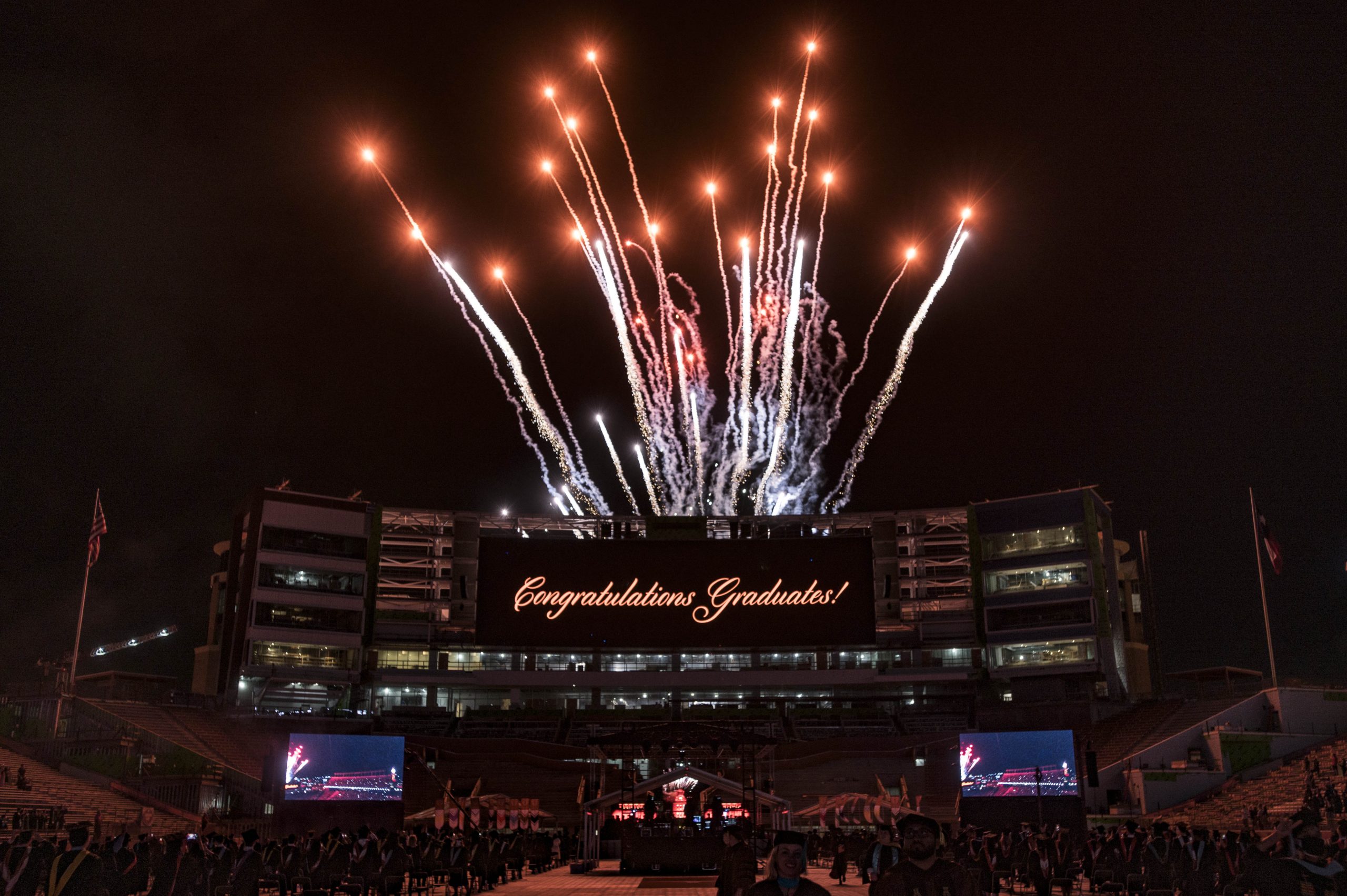 The south end zone was used for the 2021 Commencement Ceremony in May.

With four national titles, two Heisman Trophy winners (Earl Campbell and Ricky Williams), and a litany of famous alumni who have left their mark on the hallowed turf of Darrell K Royal–Texas Memorial Stadium, the university is eager to start the next chapter of this program, especially with the start of SEC play in 2025. Last season, the eighth-largest college football stadium in the nation opened at 25% capacity and didn’t top an attendance above 19,000 due to COVID-19. While the institution prepares for full-capacity crowds (reaching close to 100,000) in the fall, all the hard work will pay off in September.

“Football is king,” Martin says, “and this is the next evolution of how we can engage the Texas Longhorns fan base and the city of Austin.”