At long last, Little League Baseball is being played in Williamsport, PA. This year’s Little League World Series (LLWS) looks a bit different with 16 domestic teams and a limited crowd due to the continuation of the COVID-19 pandemic, but ESPN is bringing the amateur action to families across the country with both onsite and REMI productions and an impressive slate of technology including UmpCam, three aerial drones, and an arsenal of super-slow-motion cameras.

“We’re not back at 100%, but, from a technological perspective, we’re back to normal,” says Dennis Cleary, director, remote production operations, ESPN. “We’re missing the fans and the crowds, but we’re happy to be back.” 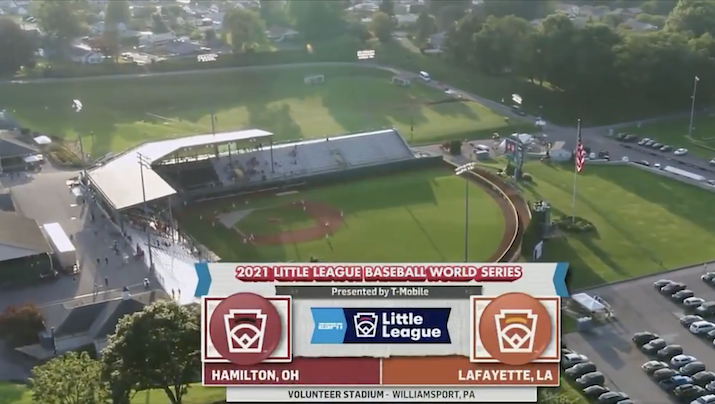 Three drones are up in the air at the Little League World Series complex in Williamsport, PA.

After 17 months of mostly offsite productions, ESPN is running with both an onsite setup and one based in Bristol, CT. As in other years, the two-week-long event comprises 30 total games played on two separate fields: Howard J. Lamade Stadium (normally reserved for the teams from the U.S.) and Volunteer Stadium (normally reserved for the international clubs). With international participation absent for the first time since 1975, U.S.-based teams are playing in both venues. Continuing the broadcaster’s commitment to the REMI model, all games at Volunteer Stadium are being produced in Bristol while games in Lamade are done the traditional way.

“Kudos to our remote traffic team for getting more bandwidth into the complex to handle the REMI and GREMI productions at both stadiums,” says Cleary. “We’re using fiber as our primary [outbound feed] for all paths, [with] satellite uplink as an emergency backup for a handful of these paths.”

For the contests at Volunteer, an onsite replay operator is controlling two EVS servers whose outputs are stitched together 276 miles away in Connecticut. At Lamade, even though the game is being assembled onsite, the broadcaster’s GREMI (remote graphics) model is being deployed, allowing on-air graphics along with two EVS servers to be controlled in Bristol. In addition, Creative Mobile Solutions (CMSI) is pitching in with cloud-based solutions for remote file transferring, editing, and archiving. This workflow comprises two onsite edit bays in Pennsylvania and editors in Bristol.

A trio of ESPN-owned drones hover in the sky to show off the hard-to-reach areas of the Little League World Series facility. Along with the drones, a fixed-wing plane spotlighted the progress of the Los Angeles Angels and Cleveland Indians as they headed to Williamsport for this past Sunday’s MLB Little League Classic.

“It’s new for us this year,” Cleary says of the drone coverage. “We have three designated zones that are cleared for us to fly in so we can get coverage of Lamade, Volunteer, and scenic shots of the facility.”

On the audio side, the lack of crowds has not silenced the passion of this event. Prior to the start of the competition, each of the 16 teams was given 250 passes for family members and close friends of the players. The maximum 4,000 permitted attendees is a lot smaller than the throngs that normally make this Little League pilgrimage, but ESPN has done a tremendous job capturing the sounds created from the flashy plays on the diamond.

As for other cameras, ESPN is running with its standard complement of high-end devices at each field. At Volunteer Stadium, two super-slo-mos are getting angles. Lamade has its fair share of tech, including a Technocrane in right field that grabs swooping shots out of the commercial break, and, one of the major tech highlights from the tournament in 2019, an array of 4DReplay cameras to retrieve engaging recaps of home runs and breakdowns of hitters’ swings.

Fletcher has provided a bevy of robotic cameras: five at Lamade (a Sony P1 at mid home, in the booth, at high third base, and at high home and a new Grass Valley super-slo-mo robo between home plate and the first-base dugout), two in Volunteer (a Sony P1 at mid home and in the booth), and a Sony P1 positioned atop a concession stand between the two venues to highlight foot traffic. 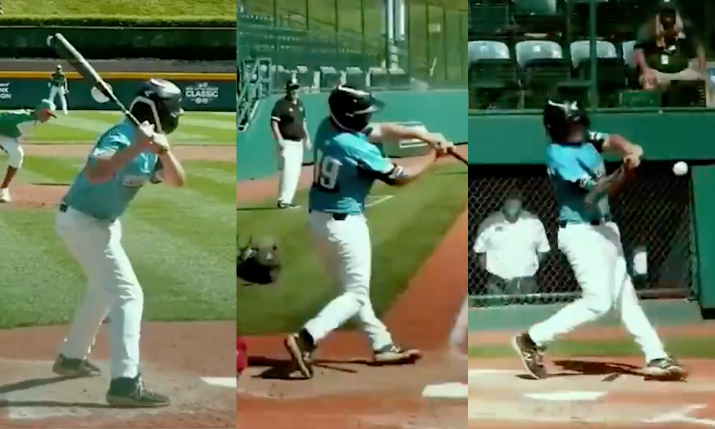 4DReplay is back at Howard J. Lamade Stadium, capturing 360-degree videos of hitters at the plate.

For this elongated stay at the Little League World Series, NEP Group is providing ample workspace for the onsite crew. At the core of the television compound, the A and B units of NEP EN3 and Supershooter 5 are parked at the complex. The former is handling games at Lamade; the latter, at Volunteer. CP Communications has a presence in the compound for RF audio and handheld needs.

As the Delta variant becomes the common coronavirus strain in the U.S., Cleary and his colleagues are focused on maintaining a safe and comfortable working environment. This includes following health guidelines issued by ESPN, Little League, and local authorities.

“Everyone credentialed is required to be fully vaccinated,” he says. “We’re also wearing masks inside our mobile units and enclosed spaces and whenever we’re around any of the players and coaches.” 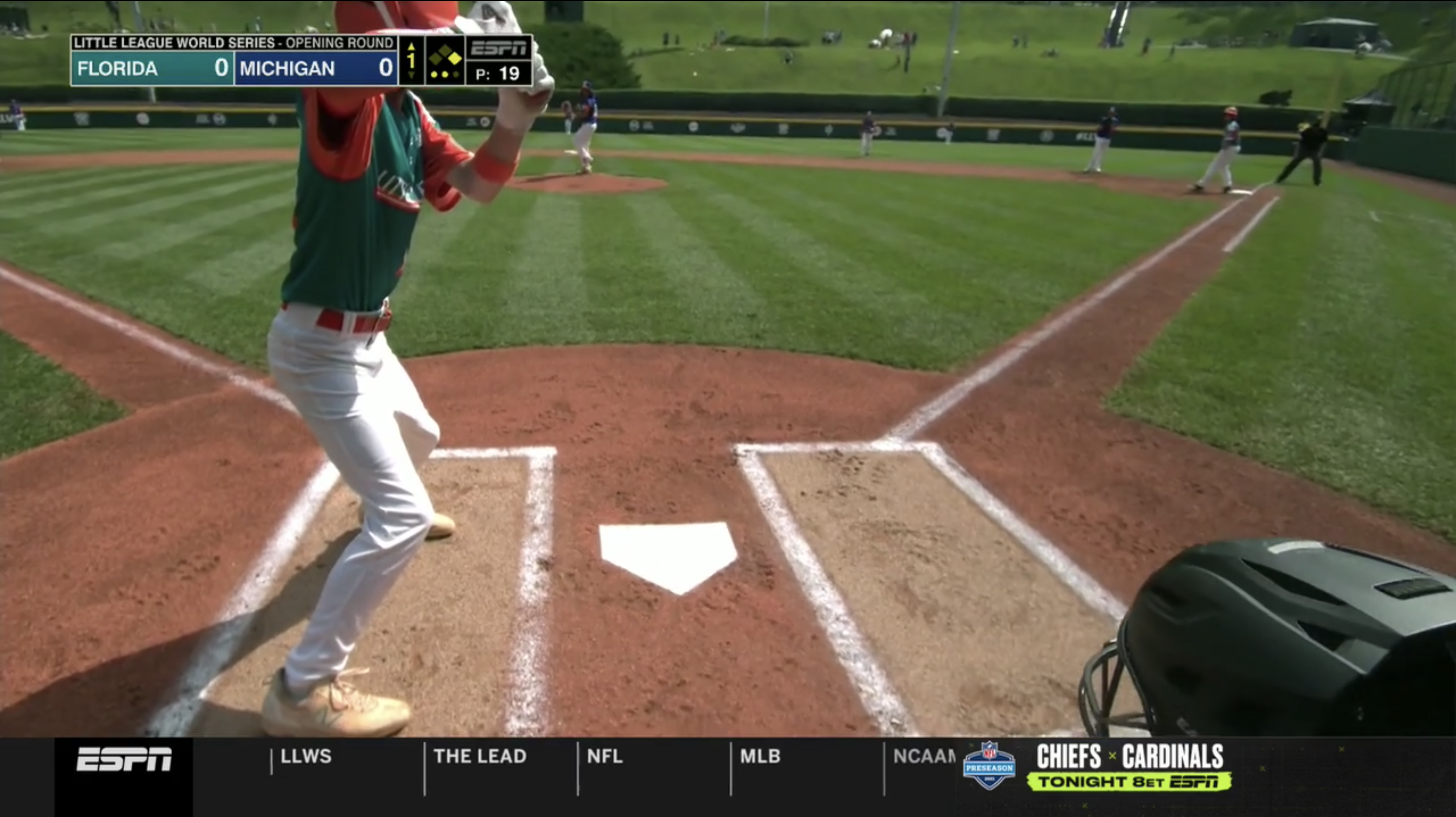 3g Wireless is behind the UmpCam being used by the home-plate umpire.

After the cancellation of last year’s tournament and the constant barrage of issues plaguing the world, seeing Little Leaguers enjoy the sport in one of its purest forms has been a breath of fresh air. That sentiment is shared by Cleary and his team who get to work on this event every year.

“This has always been one of my favorite events since I started working on it 15 years ago,” he says. “It’s one of the favorites for our crews as well. Everyone looks forward to this every year, and, when we had to skip a year, this is hopefully a return to normalcy.”

The Little League World Series wraps up this weekend with three games on ABC: the Tom Seaver Championship at 12:30 p.m. ET and the Hank Aaron Championship at 3:30 p.m. on Saturday, Aug. 28 and the Final at 3 p.m. on Sunday, Aug. 29.