Legendary CBS Sports director Bob Fishman, who has directed nearly every sport televised by the Network, will retire following the 2022 NCAA Men’s Division I Basketball Championship after 50 years at CBS. 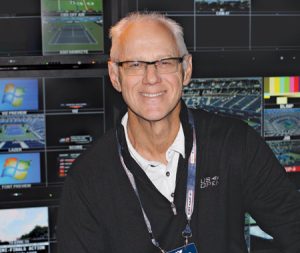 Fishman, who joined CBS News in 1972, moved to Sports in 1975. He has been the lead director on college basketball since 1982, and serves as the No. 2 director on the NFL.

“If there were a Mount Rushmore for sports directors, Bob Fishman would be front and center; he is one of the greatest directors in the history of sports television,” says Sean McManus, Chairman, CBS Sports. “While most viewers may not know his name, they are certainly familiar with his work as he has delivered some of the most iconic moments in sports over the past 40 years. Through his creativity, innovation and ability to perfectly capture the emotion of the moment, Bob has set the standard across the industry and created a legacy that will last for generations. There will never be another Bob Fishman. We thank him for all his outstanding contributions to CBS and wish him all the best in retirement.”

As part of the announcement, CBS Sports veteran director Mark Grant will succeed Fishman as the Network’s lead director for college basketball, including the NCAA Men’s Basketball Tournament. Grant will partner with lead producer Mark Wolff starting with the 2022-23 season and will team with announcers Jim Nantz, Bill Raftery, Grant Hill, and Tracy Wolfson on the Men’s NCAA Tournament. Grant joined CBS Sports in 1998 as a director and has worked on the NFL, college football, college basketball, and golf throughout his tenure.

Director Suzanne Smith has been elevated to direct CBS Sports’ No. 2 NFL team, working with Ian Eagle, Charles Davis, and Evan Washburn with Wolff producing, beginning in 2022. Smith joined CBS Sports in 1983 as a broadcast associate and has spent her entire career at CBS Sports. She is currently the only woman directing NFL games.

“Mark and Suzanne are two of the most gifted and creative directors in sports,” adds McManus. “Suzanne’s talents are unmatched as she is equally outstanding directing live events, studio shows or taped programming and is highly respected by all who work with her. She is a pioneer and a wonderful leader and mentor to many across the industry.”

Some of the indelible moments associated with Fishman include Michael Jordan’s title-winning shot in the 1982 NCAA Basketball Championship game, Tonya Harding crying with her broken laces at the Olympics in Lillehammer in 1994, Jimmy Valvano running around the court in 1983 looking to hug someone after his North Carolina State team beat Houston, Joe Carter’s walk-off home run in the 1993 World Series, Kris Jenkins’ Championship-winning shot in 2016, Gordon Hayward’s shot off the rim that would have beat Duke in the 2010 Championship game, Keith Smart’s NCAA buzzer-beater in the 1987 NCAA title game and the in-car camera shots in auto racing, as he helped introduce those cameras at Daytona in 1982.

“Mark is a true maestro when it comes to capturing the drama and excitement at events he is directing,” continues McManus. “He is a great leader and collaborator, who is never afraid to take risks and has set the standard for innovative directing. Suzanne and Mark would be trusted with any assignment at CBS Sports, and we are thrilled they will play leading roles in our NFL and college basketball coverage.”

While Fishman is retiring from CBS Sports, he plans to remain in film and television working on various projects, including documentaries.