For the past two seasons, the Big Ten Network has been the No. 2 cable network in terms of college-football ratings, so it’s no surprise that it continues to invest in upping production quality and viewer experience. After a 2020 season marked by constant pivots, the production team is looking forward (hopefully) to schedules that don’t change and more. New tech, a new studio, and new approaches to pregame shows will make a difference.

Michael Calderon, SVP, programming and digital media, Big Ten Network, was at the center of handling all the schedule changes last year.

“I am looking forward to hopefully having zero football games canceled or postponed this year as someone whose livelihood depends on planning and scheduling the sports calendar in the Big Ten,” he says. “It’s a giant jigsaw puzzle trying to make all the pieces fit.” 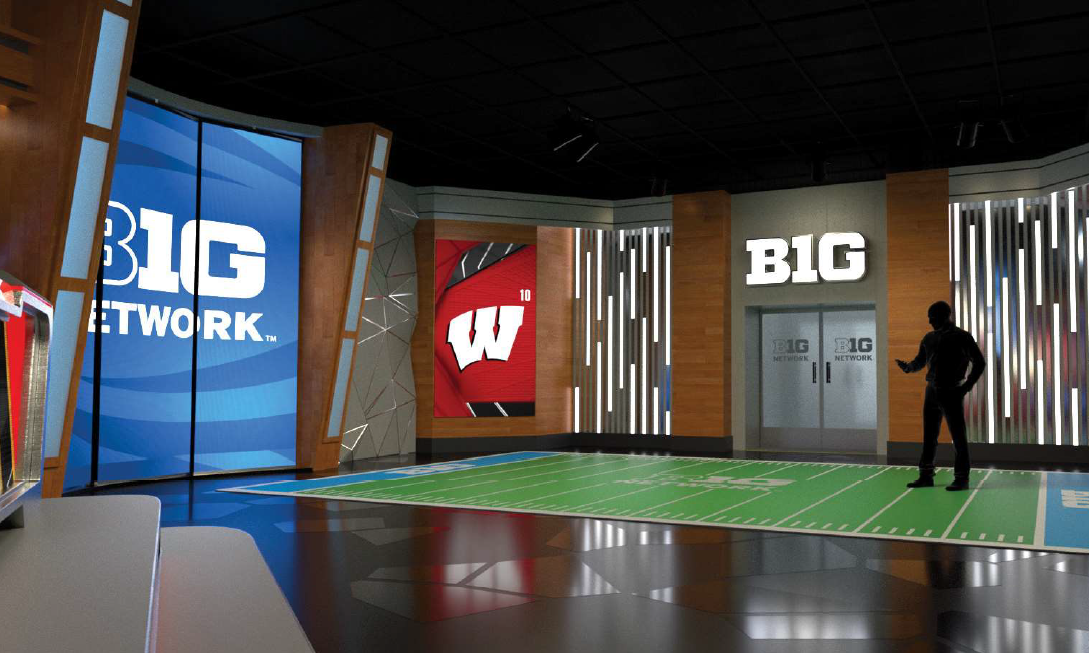 A new studio show set will offer a variety of looks for different shows and segments.

“Last year, we successfully navigated the toughest production year in our careers,” he says. “We’re hoping that this year is easier. It was very difficult to cover live events last year in empty stadiums. We just had a production called this morning, and we’re calling it the celebration of the return to full stadiums.”

As for production changes, Hulsey says the network will use Skycams for more of the marquee events, including the big Week 1 matchup between No. 17 Indiana and No. 18 Iowa. “We’re excited about that.”

A Megalodon shallow–depth-of-field rig has been added to the Big Ten Network production arsenal. According to Hulsey, it will be used on the eight-game football package and other marquee events, such as basketball tournaments and Olympic-sport championships.

“To me,” he says, “it’s like when we transitioned from SD to HD: we thought it couldn’t get better than this. And then you watch the Megalodon, and it is far better than even an HD signal. Anything that can give the viewer the sense that they are standing on the field and enhance the telecast the better. And I think that camera does that, and everybody looks at it as a game-changer.”

The Megalodon will also be used for the weekly onsite B1G Tailgate show. “We think it will have a big impact,” Hulsey says, “and we’re hoping that, as time goes on, we can add more cameras.”

Mobile TV Group will once again provide the facilities for the majority of the network’s shows requiring trucks. Other events will be produced at-home, a workflow the network has deployed for 12 years.

“We’re really, really proud of that,” says Hulsey. “Last year, the at-home model was a necessity for us. We don’t look at at-home productions as different from regular truck shows because we have such terrific facilities in Chicago. We also have robust connectivity to all the campuses.”

Big Ten Network will produce more than 560 live events for television this year, he says, adding that it is important that gold-star events see continued investment in new technologies.

“The Skycams are real game-changers for us, and we’re always pushing for more super-slo-mo,” Hulsey says. “We’re fortunate that we’re given very good resources from our partners at Fox. It’s a huge advantage for us as Fox helps us tremendously when it comes to a lot of our arrangements with vendors. We appreciate that every day.”

The Tailgate show isn’t a new technology, but it does bring new flexibility. The goal, says Hulsey, is to offer a two-hour Saturday-morning show that gets fans ready for a long day and night of college football.

“We want to showcase the energy that you just can’t replicate from campus settings as all of our campuses are just electric,” he explains. “We’re going to get away from the traditional desk and have a mini playing field where I want people standing and interacting with fans. It’s loose. It’s more fun. It’s more Saturday-morning. It’s more collegiate.”

The onsite presence will be complemented with a studio presence from Chicago, with the mix of onsite and studio determined on a week-to-week basis.

“It’s going to be a combination of a studio-based show and a live-event presence onsite with a regular co-host,” says Hulsey. “We’ll take it week by week as to whether more of the show comes from the studio. For example, if you have bad weather and don’t anticipate a bigger crowd, more of the show will come from the studio. But I think the product is always better when you’re onsite.”

Not having a desk, he adds, allows the host and co-host to interact with the fans in a more personal way. “We’re going to give the X’s and O’s and the regular content because we know the Big 10 better than anybody. But it will be a little more of a loose style. With a desk, it’s a little harder to do that.”

The Big Ten Network is about more than football, and Calderon will be hard at work building on a strategy that ties the football games with volleyball.

“It’s not only the size of the audience for volleyball but the demographics,” he says. “It has the youngest audience for an event that we televise. It’s an exciting television product, it’s really athletic, and the Big Ten excels at it.”

The network has worked hard to grow the sport, and, with volleyball back to being a fall sport, there is a chance to go straight from a football game to a volleyball game featuring one of the two teams in the football game.

“We also have Volleyball in 60, which [takes] the best match of the weekend and [condenses] it into a 60-minute format,” says Calderon. “It allows us to provide volleyball exposure during the week on non-game night.”

The network is also working closely with schools on a multi-platform initiative. For “At the Net,” on-campus producer/editors and a third-party production company create short-form content for digital consumption. The pieces are then aggregated into a 30-minute show for the network.

“It’s an extension of a similar series for wrestling,” Calderon notes. “We found that we can retain the audience better by doing some storytelling after a match. The intent is to grow the sport by putting more content on all the platforms and then strategically schedule it around the live events on linear.”

A new digital studio in Chicago will make a storytelling difference for social media. It was constructed just before the pandemic shut things down in March 2020, and now it is being expanded so that the network will be able to fully put it to use.

“We had so much success with it in year one that we’re in the process of doubling the size,” says Calderon. The Fox Sports design team in Los Angeles helped, and the facility will be up and running next to the main studio set in Chicago by the end of September.

“The fact that it’s right next to our studio set affords us the opportunity to get our TV talent more involved in our digital content as well,” adds Calderon.

The new digital set will be next to a newly designed studio set that Hulsey says gives the network a lot more ability to produce higher-quality content.

“We’ve spent a great deal of the summer working through that with the Fox design team,” says Hulsey. “It’s the same size but has a different background and more video elements as well as a demonstration area, which we didn’t have before. We’re trying to get a little more out of the space.”

The digital strategy at the Big Ten Network is to try to expose conference content and events to a younger audience. First, students on member campuses get free access to stream Big Ten Network+.

“The growth in our social-media and content strategy over the years is designed to try to engage with that younger audience,” says Calderon. “This past year, we launched sports-specific Instagram accounts for wrestling, hockey, and volleyball. We’re launching a women’s basketball Instagram account this year, and we’re utilizing all of our resources.”

The network has also made it easier for on-campus production teams to access tools like WSC and Grabyo to easily create highlights and other content. Over the summer, the network held a series of meetings with the social-media teams at the campuses to learn about what those teams want from the Big Ten Network and to also share best practices and other strategies.

“We try to be attached to the school brands,” says Calderon. “On Twitter, we have 14 school-specific handles, like Michigan BTN or Ohio State BTN. And that’s part of the acknowledgment that fans are fans of their schools first and the network second.”