Although the COVID-19 pandemic is still very much a part of our lives, the start of college football season has been refreshing and uplifting for sports networks, which not only are returning game production to the stadium but are producing onsite pregame shows from campuses across the country.

For the first time since fall 2019, the Pac-12 Network is bringing back its Saturday-morning on-campus series, The Pregame, with a trip to Eugene, OR, to preview the University of Oregon Ducks’ non-conference showdown with Fresno State. For the next 12 weeks, The Pregame will visit every one of the conference’s member institutions.

This year’s Saturday-morning slate will be a bit different. The Pregame will shift from an hour to 30 minutes, making way for a new campus-lifestyle show called Pac-12 Tailgate, which will air live immediately prior. Live on-campus coverage begins at 10 a.m. PT. 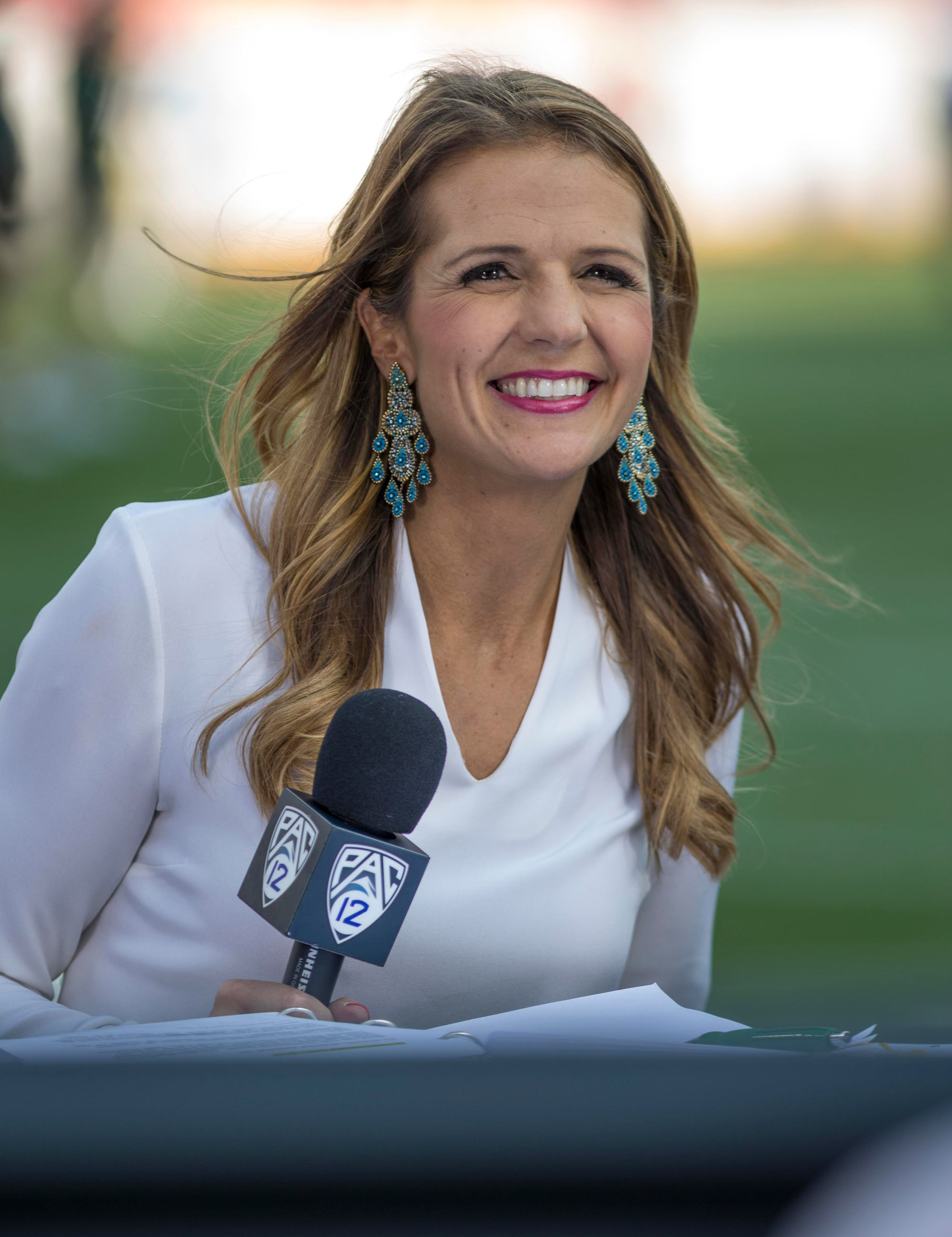 Pac-12 Network’s Ashley Adamson: “[The Pregame] is going to be hyper-focused on the school that we are at and the game that we are leading into.”

SVG caught up with the host of The Pregame, Ashley Adamson, a veteran of Pac-12 Networks since its launch in 2012. She discussed what it feels like to finally return to campus after all this time, how the new show lineup affects the stories the network wants to tell, and adapting to the future of “at-home” production as on-camera talent.

Getting back to campus and getting Pac-12 Networks back with a desk on a campus: what does that mean to you as a broadcaster?

I don’t ever want to say that any of us ever took our jobs for granted, because we know we have the best jobs in the world and feel incredibly lucky to be able to do what we do and to talk about sports for a living. [But] it’s like anything else: when it is taken away and when you are doing everything remotely, it’s different. The reality of being a great sports journalist is being able to show up and be there and build those relationships and see things with your own eyes so that you can share the stories and all the behind-the-scenes stuff with the people at home.

We’ve been doing our jobs as best we could for the last 18 months, but, as of this weekend, [we’re] getting back to, for me personally, what made me fall in love with this career, which is being able to be there and talk with the coaches and talk with student athletes, and say hi to the fans, and just get that feeling of a college football Saturday.

It’s going to be different. It’s not going to be the exact same as it was pre-COVID, certainly, but excited isn’t a strong enough word. I’m elated to be back doing the thing that we love to do. I wish I had a more cerebral answer for you, but it’s the reason people who are in this line of work do it: it’s to be there and to get to experience it. I’ve got a giant grin on my face just thinking about it.

Your Saturday-morning football show, The Pregame, has always done a really good job of making sure to visit every Pac-12 campus every year. You put yourself in a cool spot on the campus and tell the story of the campus and what life is like there. Does the extended break change the kind of stories that you want to tell and change how you would approach these visits?

First of all, I think everything we do from now on will be a little bit different, given COVID.

In years past, we would melt between the flavor of the campus and the X’s and O’s, the matchups, and the football treatment. It was sometimes hard to navigate that: how do you go from talking about the gymnastics team to the matchup between the linebackers? There was just so much that was hard to figure out, how that show all came together. Now it’s awesome that we’ve got two distinct shows.

I don’t want to spoil anything or promise anything that won’t end up making the air, but there are some really cool things in the works. We work with the campus to say, “What do you want to showcase?” — whether that’s [a player or a place]. [This week,] let’s make [Pac-12 Tailgate] about Oregon and what makes Oregon special. [The Pregame] will be much more of the actual football-heavy, matchup talk, what you would probably expect to see more of from a football pregame show. We’ll mix in, hopefully, an interviewer too, as well as just talking about the matchup.

I think the thing that I’m seeing from behind the scenes is that, because we have only a half hour now to get into the game and because we are this year being very intentional about trying to be on campus and lead into the game that we have on our air, which we didn’t do in the past, it makes it trickier from a logistical standpoint. But it makes it way better for the viewer, because we’re going to be live in Eugene leading into that game and we are going to have the Oregon audience that is going to want to hear about Oregon. I think it gives us a chance to be a little bit more specific. Yes, we will still go broad-based, and we will still look at the big stories of the day, but it is going to be hyper-focused on the school that we are at and the game that we are leading into. Which is going to be a really nice change from how we’ve done it before.

I’m certainly not trying to have any fanbases come after you here, but is there a campus that you’re really excited to get back to?
I can say diplomatically that truly, and I mean this, I love going to every single one of our campuses. If I could cover any conference anywhere in the world, it’s the Pac-12 because of the schools’ [campuses]. Every single one is more beautiful than the next, and they all have something totally different, whether it’s the city vibe or the country feel or the college town.

I will say, I’m from Colorado and grew up in Denver, and, every time I get to go back to Boulder, I remember coming to games at Folsom Field when I was younger. Every time I step on that campus or go to Folsom, I’m like, “I can’t believe I’m getting paid to be here.” That’s one that always sticks out in my mind.

I will also say Eugene. I love going to Eugene. I ran track growing up and have always had a big affinity for the love and the history [of Oregon] as a track school and all of those Prefontaine trails. I remember the first time that I went for a run on Prefontaine trails that are back behind Autzen Stadium. It’s magical. There’s no way to describe it other than it’s just totally magical, especially when you’re there in the fall. Oregon is a special place. But I love all 12 of my children the same when I’m going to them.

You’ve been with the Pac-12 Networks since the beginning. Much has been made across all of sports about how so many games during the pandemic were produced using at-home workflows. There is still talent broadcasting games from their homes. As you look back, did the fact that at-home production has been a part of the culture of Pac-12 Networks since day one make you feel a bit more prepared for this?
I think that’s a great point and something that we probably haven’t talked about enough. I will say that, when we first started, it was honestly Leon Schweir’s vision. Our former VP, who passed away recently, was really bullish on it.

We are going to do 850 live events. We need to figure out a way to do them way more cost-effectively. Otherwise, this is not sustainable to treat every single game with a full live truck and crew. When it first came to be and we were starting to do automation and [centralized] control rooms, I think there was a lot of “Wait, what? We’re going to be calling games off monitors?” Now, there is much value in being at the game, but, from a production standpoint, [at-home production] allowed us — certainly when the pandemic hit — to be able to pivot a lot more quickly than others.

It used to be that no one wanted to talk about the fact that we weren’t actually there. Now it’s industry-wide; everybody’s doing it. I think that we were way ahead of the curve, even though, at the beginning, we were all going, “Wait, is this really where we’re going?” Now it’s like, “Well, that was brilliant. That was a really smart thing to make sure that we had the infrastructure and the vision to do that.” Now it’s way more industry-standard, and I think it will be even more normal moving forward.

How has it been getting back into the preparation process for The Pregame? Did you find yourself starting really early? Has it been sluggish? What has it been like getting back into the old groove?
It’s interesting because I’ve been working on a lot more things than I was involved with previously. What has been cool about being a part of the network for the last nine years is that every year has been a little bit different. My role has changed, and I’ve gotten to be more involved with behind-the-scenes stuff with future production. There has been so much going on. I’m working with our postproduction team. I’m involved in some of the features that we’re trying to put out. We’ve got a lot of different initiatives going on at Pac-12 right now that I’m involved in.

Usually, I take the summer to go team-by-team and build up my file on each team. I wouldn’t say that I have done that in the same way this year. The good news is, now that I’m going into my 10th year, I am way more familiar than others. Obviously, there’s a lot of turnover and attrition, and the [NCAA] Transfer Portal makes it tricky, but I feel like I have a way better working knowledge and understanding of not just the current teams but the traditions and histories.

I would say I’ve been more focused on a lot of other aspects of stuff that probably you would never see or know on the air, which I love, and I’ve been really grateful that I’ve gotten to be involved in more of that stuff because it’s the future-type stuff and the producing behind the scenes that I also have an affinity for.

I think it’s like riding a bike. [We were doing] Media Days and 12 team-specific shows and then an hour long show. [Now] I’m thinking, “Oh, my God, I’m not going to even remember how to talk on camera.” It’s just something different when you’re doing TV on Zoom or are in studio. Once you’re into it, again, it’s the relationships that you have with the people that you’re talking to that make TV good. We’ve got some great people, and I’ve got some great longstanding relationships with a lot of those people in our network now. So it’s fun.

I think the most important thing is that we are so lucky. We’re not taking one second of what we’re getting to do for granted. There’s a world in which, if COVID gets worse, we’re back in the studio, or we’re not having games. I think no one expects anything anymore. So there’s gratitude and appreciation. Let’s have fun, and let’s enjoy this. It’s work, but it’s not work.