Billboard’s Artist of the Decade, Drake, will work with ESPN throughout the entire NFL season to curate music for select Monday Night Football games. ESPN has collaborated with Drake to choose music that encapsulates both the energy and mood of select Monday Night Games on ESPN. The music will be a combination of Drake’s most recent releases, potentially some classics, as well as new music from other artists he identifies; all of which will run in Monday Night Football promotional spots, live telecasts and pre-game shows for ten games this season, starting this week. 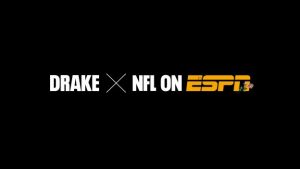 “Now we are here…the kickoff of the football season. And who better to curate music for Monday Night Football than Drake who sits firmly at the intersection of music and sports. We couldn’t be more excited for this upcoming collaboration,” says Emeka Ofodile, Vice President of Sports Marketing, ESPN. “The music curator role has been a big hit with our fans with Diplo and DJ Khaled in previous years….and this season, we will be living inside the moment with Drake as our NFL on ESPN soundtrack.”

Aubrey “Drake” Graham is a Grammy Award-winning, platinum-selling recording artist, multi-faceted performer and film and TV producer. His first studio album, “Thank Me Later” was released in 2010 and debuted at No. 1 on the Billboard Albums chart. Drake’s sophomore album “Take Care,” released in 2011, won the highly regarded Grammy Award for Best Rap Album. The album went multi-platinum, reaching No. 1 on the Billboard Albums chart, selling 631,000 copies its first week, and earning three top 10 songs on the Billboard R&B/Hip-Hop chart. His fourth and quadruple platinum album, “Views” was released in April of 2016 and landed on the US Billboard 200 list as number one for thirteen non-consecutive weeks. Most recently, Drake released his highly-anticipated six studio album “Certified Lover Boy,” which broke Apple Music’s one-day streaming record in under 12 hours. He holds the record for the most number one hits on Billboard’s R&B/Hip-Hop Chart.