Live From the US Open: ESPN’s Domestic-, World-Feed Efforts Are Bigger Than Ever

Despite two big storms, every court is being covered from qualifying to tourney’s end

ESPN’s production of both the domestic and the world feed for the US Open continues to evolve, and, this year, it rose to a new level, with court coverage expanding to every court in the Billie Jean King National Tennis Center. 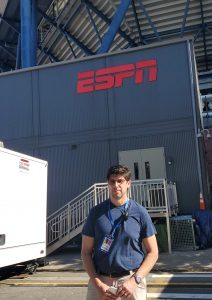 ESPN’s Larry Wilson says it’s great to see the whole production team back onsite for the US Open.

Larry Wilson, associate director, remote production operations, ESPN, is zeroed in on the broadcaster’s tennis coverage and sees this year’s Open as an important step after last year’s scaled-down efforts.

“It’s nice to be back and great to see the workforce back,” he says. “This is the largest production we’ve done as the coverage of the main draw and qualifying expanded.”

The biggest change for tennis fans is that the ACES automated court-production systems have been expanded to all outer courts. ACES systems comprise a Simply Live ViBox production system and four Fletcher robotic cameras for each court.

“We had 14 ACES positions, and, in years past, that has been only five courts for qualifying, so it is a massive expansion,” says Wilson. “Before the main draw even started, we had covered 224 matches on all 14 courts, and we are now extending coverage to all junior and wheelchair matches. Those courts’ coverage used to pack up after Labor Day, but now they are here through the end of the tournament.”

The lack of fans last year gave the ESPN production team and Gravity Media (which oversees the technical facilities) a huge amount of freedom when it came to new camera locations. For example, last year, Camera 7 was able to be located in the front rows of the stands behind one of the baselines. The return of fans this year means that that location is not available, but a robotic camera mounted in the walls behind the baseline at Arthur Ashe Stadium is replacing a camera that was located in the stands right above the court.

“We wanted to copy that again,” says Wilson, “so we have a robotic camera with a long lens mounted on a Peapod mount within the LED wall to get a low angle. We also added a couple robotics that are actually shooting all the way across the court to cover the coaches. Those are using long ENG-style lenses and are much less intrusive to the coaches. We get lots of nice candid shots. Before, they were small robotic POVs that were within the box looking back at them. The new cameras have been very good for production.”

The Canon lens on the wall-mounted camera is a 45×9.7; the lenses on the cameras shooting the coaches are 18×28.

Camera 9, which is located courtside, has also been revamped: it has been moved to a small Chapman mount tucked into the first row of the stands along the court.

“The cameraman can be in a perfect spot and not be obtrusive to the players,” Wilson points out.

Another change from last year is that the 100-ft. tall ESPN SupraCam Tower has been moved to a different location because the previous location is now used for van shuttles.

“It’s on the exact same line, running over the practice courts and through the grounds,” he says. “And SpiderCam is also back in action on Arthur Ashe Stadium.”

The unique challenge this year has been not only dealing with evolving COVID-19 protocols but also two massive storms. The first one, Hurricane Henri on Aug. 31, affected the final preparations for the tournament; the second, the remnants of Hurricane Ida on Sept. 1, impacted the tournament itself.

“When Hurricane Henri came in on a Saturday,” says Wilson, “our goal was to be on-air on Tuesday, and we basically had to shut everything down and get any hardware that was out on the ground either to higher ground or into cases and containers. On Saturday, all of our cable was lifted, and the sets were strapped down. Then on Sunday, we came up with a plan so that, when we got here on Monday at 6 a.m., we could start from scratch and basically do a set, shoot, strike to get ready for the qualifiers. But it all worked out.”

As for Ida, the issue there was the amount of water, which Wilson describes as mind-blowing.

“The biggest challenge there was the safety of the crew and getting everyone back to their hotels,” he says. “By the time we got on-air the following day, there was only one camera of 172 that still wasn’t working, and that was back up within an hour.”