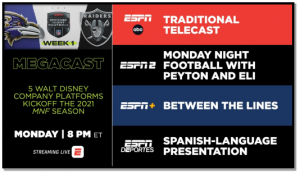 For the 2021 Monday Night Football debut, Between the Lines on ESPN+ joins the traditional telecast (ESPN and ABC), Monday Night Football with Peyton and Eli (ESPN2) and the Spanish-language telecast (ESPN Deportes), all previously announced. Between the Lines will provide deep analysis, analytics and a betting-centric conversation featuring the NFL Live and Daily Wager casts, as the two shows reunite after successfully debuting the concept during ESPN and Disney’s 2021 Wild Card MegaCast. With the additional commentary serving as the backdrop for Ravens-Raiders, the offering will represent the first time a Monday Night Football presentation is available on ESPN+.

ESPN and ABC Anchor the MegaCast with Traditional Telecast; ESPN Deportes Airs Spanish-Language Presentation
Fans watching the traditional telecast on both ESPN and ABC will be welcomed by Steve Levy, Brian Griese, Louis Riddick, Lisa Salters, and John Parry into Allegiant Stadium in Las Vegas as the broadcast team embarks on its second season together on Monday Night Football. For Salters, the 2021 season marks her 10th on MNF, extending her record as the longest-tenured sideline reporter in the franchise’s illustrious history. Levy is in his 29th year at ESPN, with Griese and Riddick in their 13th and ninth, respectively. Parry, the former Super Bowl referee, joined the network in 2019 as a rules analyst.

Elements surrounding the telecast include:

ESPN Deportes will televise every Monday Night Football game once again this season, with Pablo Viruega and Eduardo Varela on the call, along with John Sutcliffe reporting.

Monday Night Football with Peyton and Eli Debuts
Monday Night Football with Peyton and Eli is a new, casual, non-traditional remote telecast anchored by the Super Bowl-winning Manning brothers. Airing on ESPN2, the alternate telecast will combine in-the-moment analysis, big picture NFL dialogue, knee-jerk reaction, historical perspective and more. Iconic NFL stars and current athletes, as well as celebrities, are expected to appear each week. Fans won’t miss a second of the action, as a multi-box viewing experience will ensure the game is always visible.

The alternate telecast option will debut in Week 1 and air 10 times this season, including Weeks 2 and 3. For nearly all telecasts, Peyton will be in Denver and Eli from New Jersey; however, for the Ravens-Raiders matchup, both brothers will be in the ESPN Seaport Studios in New York City due to a previous scheduling commitment.

NFL Live and Daily Wager Cast Provide A Different Approach on ESPN+
Between the Lines combines the cast of two daily ESPN shows, as Laura Rutledge, Mina Kimes, Dan Orlovsky, and Marcus Spears from NFL Live and Doug Kezirian, Joe Fortenbaugh, and Tyler Fulghum from Daily Wager will all play significant roles and, at times, interact with each other during the telecast. The Ravens-Raiders telecast will be supplemented by an array of data and statistics, including live odds, as the team provides their insights in a free-flowing format, inclusive of broad strokes odds conversation. The two groups will originate from their home studios, with NFL Live in Bristol and Daily Wager in Las Vegas.

In addition to Monday Night Countdown, Monday Tailgate (7:30-8:30 p.m. ET) will be available on the ESPN App and ESPN’s Facebook, YouTube, and Twitter accounts. The digital show is hosted by Jason Fitz and Shae Peppler Cornette from Bristol.