Live From the US Open: ESPN’s Jamie Reynolds on the Return of Fans and the Rise of a New Generation

Jamie Reynolds, VP, production, ESPN, has been involved with plenty of US Opens but none like this year’s. The absence of some of the game’s top stars, a pandemic, the return of noisy fans after a 2020 Open memorable for its silence — all of these factors have marked this year’s Open, and Reynolds discussed all of them, as well as the evolution of production tools, with SVG earlier this week. 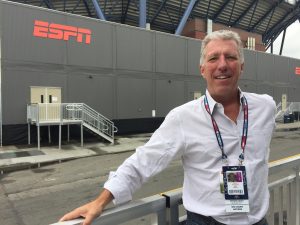 ESPN’s Jamie Reynolds: “I don’t know that you could ever have written a script as complicated as what this US Open has represented.”

What are your thoughts on this year’s Open and where it has come from last year?

Let’s begin with the fact that I don’t think the USTA received enough accolades for what they achieved a year ago. They brought in the entire singles field, put them in an isolated player-only hotel, and managed 2½ weeks of a tournament in a very austere, protected environment, [and it] was a success beyond anyone’s appreciation.

Now we are here with the fan voice and fan enthusiasm. Part of that enthusiasm is that people have finally felt the ability to express themselves, get outside again, and become a part of a community enjoying sport. The energy is carried through the entire venue, and we hear it night after night.

In New York City, you have a very exceptional fanbase that are going after not the stars but just the enjoyment of sport theater and great competition. And they can ride the wave in either direction, point by point, moment by moment in the stadium. In one breath, they could be down on a player; the next, the recovery cycle; and the next three points change the entire dynamic. It’s fascinating.

And there have also been 33 five-set matches, which is almost a record.

The competition has been madness; it’s just really good. In the absence of stars, we thought, well, who’s going to be the breakthrough, what name’s going to come out? But it hasn’t been a name; it has actually been an Open for a lot of young-generation players that have some sparkle, charisma, and the kind of attractiveness that says there’s hope and promise for what this next generation of players can offer. It’s almost as though it wasn’t the 20- to 25-year-olds but the 18-year-olds that are rekindling the spirit.

For the past decade, there have been some obvious storylines around players who aren’t here this year: Serena, Rafa, and Roger. How did you get ready to find new storylines?
It’s being ready for any condition that might present itself, and it really comes back to the preproduction elements and having access to players prior to the tournament, getting as much sound and as much imagery in a very focused environment.

We haven’t had access to a lot of these players for almost 18 months or even two years, and we’re looking at new portraits of the players and sound from them. We want to understand their maturation process and just the opportunity to hear them come out of their experience. They’re just as expressive as the crowd, and there’s this renewed energy.

There are fans back in the stands, and I know that affected your production compared with last year. How did you adjust?
Last year, we took advantage of the fact that we could build out camera positions and get closer to the athletes without having to worry about seat kills. Now we find ourselves being removed from that, and that has allowed flexibility to start thinking about how we are going to approach the game and the resurgence of fans, the energy in the house, and come up with some new technologies, whether it’s a wider variety of robotics or new camera positions in the LED walls around the perimeter of Ashe Stadium. We’ve got access to more RF systems here and ENG kits that are running here than we’ve ever had before. We came in with a broad array of camera assets and acquisition hardware, and we weren’t sure what the rules were going to be like for social distancing.

You are using more robotics in Ashe. What do you think they bring to the table for things like covering the player’s box?
I think those cameras give us a dedicated asset where, before, we had to use some of our cameras for match coverage to keep an eye on the emotions that might be in a player’s box. Now that we have the dedicated facilities to do that, we can cover the interplay more dynamically, and that has been a strong improvement.

Those cameras are part of a three-part play on a robotic complement that gives us a wider toolkit to harness as much of the activity as possible. We have our ACEs court systems, [giving] us volume on perhaps the developing stars. It also gives us flexibility to give frequency and volume to the outer-court experiences within the coverage of primary show courts. We have versatility to put more cameras out with more hours to keep an eye on things, and we don’t have to have hours of manpower and shading and operating.

The third ingredient of the robotic systems is that they give us access to hallways, workout facilities, lifestyle of the players [and] are both safely distanced and constantly on. We can capture any of the environments where the play might be both from a personality standpoint or from a competition standpoint, and that’s valuable. When you’re playing host broadcaster, as well as ESPN, domestic, and international, there are a lot of distribution points [where] you can do different types of storytelling and meet all types of inquiries [from rightsholders].

It has been great to see how those cameras on practice courts or in workout areas are used to provide great B-roll for things like the pregame and studio side.
Part of the conundrum with all this hardware out on the court is how many different aspects or accent elements can you provide that enhance the moment. How can we use it one way on linear, one way in a digital space, or even a multifaceted view so you can see somebody walking off at the same time the other player is signing autographs? [How can we] be in the moment in this omnipresent universe so viewers can appreciate all of it at once as if they were here in real time?

You also use split screen a lot to show multiple matches and more.
Yeah, you’ve got a 16:9 aspect ratio, and you can put multiple matches on at once and take advantage of that horizontal landscape. We have the two boxes running together to get as much of the theatrical experience as we can with either the audio or our personalities on top of it. [We] try to bounce back and forth and keep the screen or storylines changing with subplots or primary plots that might be valuable to the viewer.

One thing that is new is having a studio for announcers in Suite 200 of Arthur Ashe. What has that meant to the coverage?
With the open-air window, you’re in the atmosphere of the event and the proximity to the baseline, and the end-zone look is one of the best in the sport. There are nuances to it as we can only fire up the lights during warm-ups and post-match. That changed the dynamic fluidity of formatting the show to take advantage of that position. But it’s a very accommodating position in the largest tennis stadium in the world.

This Saturday will be the 20th anniversary of 9/11. Can you share anything about ESPN’s plans?
ESPN as a network has a number of windows that will help amplify the 20-year anniversary. We looked at the proximity of this tennis center to Citi Field and what might be going on there [with the Mets and Yankees playing]. I think there will be a very communal spirit, and we’re taking our cues from what the USTA is featuring with their remembrance tributes that will be front and center on Saturday.

One of the unique stories is that our talent Alexandra Stevenson was actually here on 9/11 and has a very intimate moment with some of the folks and volunteers that were working on this event then, including a fond remembrance of one of the firefighters that had been one of the volunteer drivers here and lost his life.

Finally, looking back at the Major season in 2021. What are some of your thoughts?
Well, we learned how to do the Australian Open remotely in January. The French came around in the spring, and they changed the calendar a little bit; that impacted the international side of the equation for handling that event. And then, there were the challenges of getting everybody into the UK for Wimbledon. We’ve learned a lot about going back into the world after a two-year absence, and that restored a little bit of faith and hope on a horizon.

Tennis was going to restore a little bit of normalcy to the year, and that was a great first step. Then we come around to New York and have these shifting conditions, operating within the pandemic policies and influences, and then the weather ingredients, new equipment, and fans returning. It was a convergence of all this great energy, including significant hurdles that gave this entire event a completely different dynamic and character. I don’t know that you could ever have written a script as complicated as what this US Open has represented.