Gravity Media’s efforts at the US Open have always been impressive, playing a key role in making sure the technical backbone of the TV production is in place and runs well. But, with a truly international production team, including dozens of staffers who came in from overseas, the challenge took on new dimensions that went beyond the usual concerns like power and signal management. 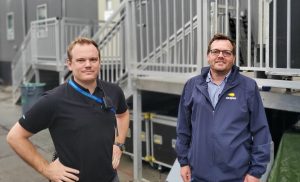 Hamish Harris (left) and John Williams of Gravity Media at the US Open.

“It felt more difficult this year than it did last year because everybody had to be double vaccinated and in the UK the vaccination rules are different where you get your second dose eight weeks after your first,” says Hamish Harris, Gravity Media, technical project manager. “And then you add in the need for national interest exemptions to be able to get into the country.”

On top of the personnel issues there was simply getting equipment in as there is a global logistics crisis that is impacting nearly every industry in the world. John Williams, Gravity Media, director, media services and facilities, says some of the equipment like furniture had to be shipped directly from the Australian Open in January while other equipment used at the Olympics in Tokyo needed to be flown in.

“This year has been about getting to production levels we were at pre-pandemic,” says Harris. “Last year we dropped a couple of courts so we only had three control rooms but that is now back to five. And obviously there are more cameras, audio consoles, vision mixers and all on an IP core. And because we’re a fly pack company its based around a stage box model that allows us to decentralize the router.”

The biggest production challenge early on (weather aside) was getting 14 courts of qualifiers ready for automated production with Simply Live ViBox and Fletcher camera systems.

“A few years ago, it was nine courts and that’s another four courts and 20 cameras so now we’re up to 56 cameras,” says Harris.

Adds Williams: “For the usual remote production 56 cameras is still a pretty decent sized production. We basically have a decent sized TV station in a car park in Queens.”

Gravity Media also has its own technology in play as well as its netcams have been deployed across the courts. The Gravity Media cameras were also used at Roland Garros for the French Open.

Everyone was challenged by the storms that hit the Billie Jean King Tennis Center. First was Hurricane Henri on August 21 and then Hurricane Ida on September 1.

“For Henri we battened down the hatches, turned all the power off, turned all the kit off just in case the air-con failed, and things like that,” says Harris. “Then we came back on Monday and rebooted it and you do realize how long it takes to turn on a TV studio again. We probably lost a day, but we were able to get the ACEs courts up by the next day.”

“We have redundancy across everything, and we have full redundant switches,” says Harris. “And then we have fiber cores for the stageboxes where nothing else is allowed to be running on them. It works well and it’s all been absolutely fine.”

The Gravity Media team on Monday will begin tear down with some of the equipment heading to Boston for the Laver Cup from Sept. 24-26.

“The kit will meet up with Gravity Media’s Columbus truck that is coming from Los Angeles and then the rest will head straight to the Australian Open,” says Harris.