Twenty years ago, New York City was a shell of itself: physically and emotionally hollow. Although the painful memory will never go away, the greater metropolitan area has been gradually healing over two decades of reflection and remembrance. This past Saturday, Fox Sports broadcast a special edition of the New York Mets vs. New York Yankees at Citi Field to honor the victims and the heroism of the first responders of Sept. 11, 2001.

“From the minute we knew that this game was going to be in our schedule, we knew that it was going to be special,” said Brad Cheney, VP, field operations and engineering, Fox Sports, before the game. “We also know how important baseball is to the fabric of America and what this day means to the country.”

Big Day for 4K: Four Games in 4K HDR for the First Time Ever 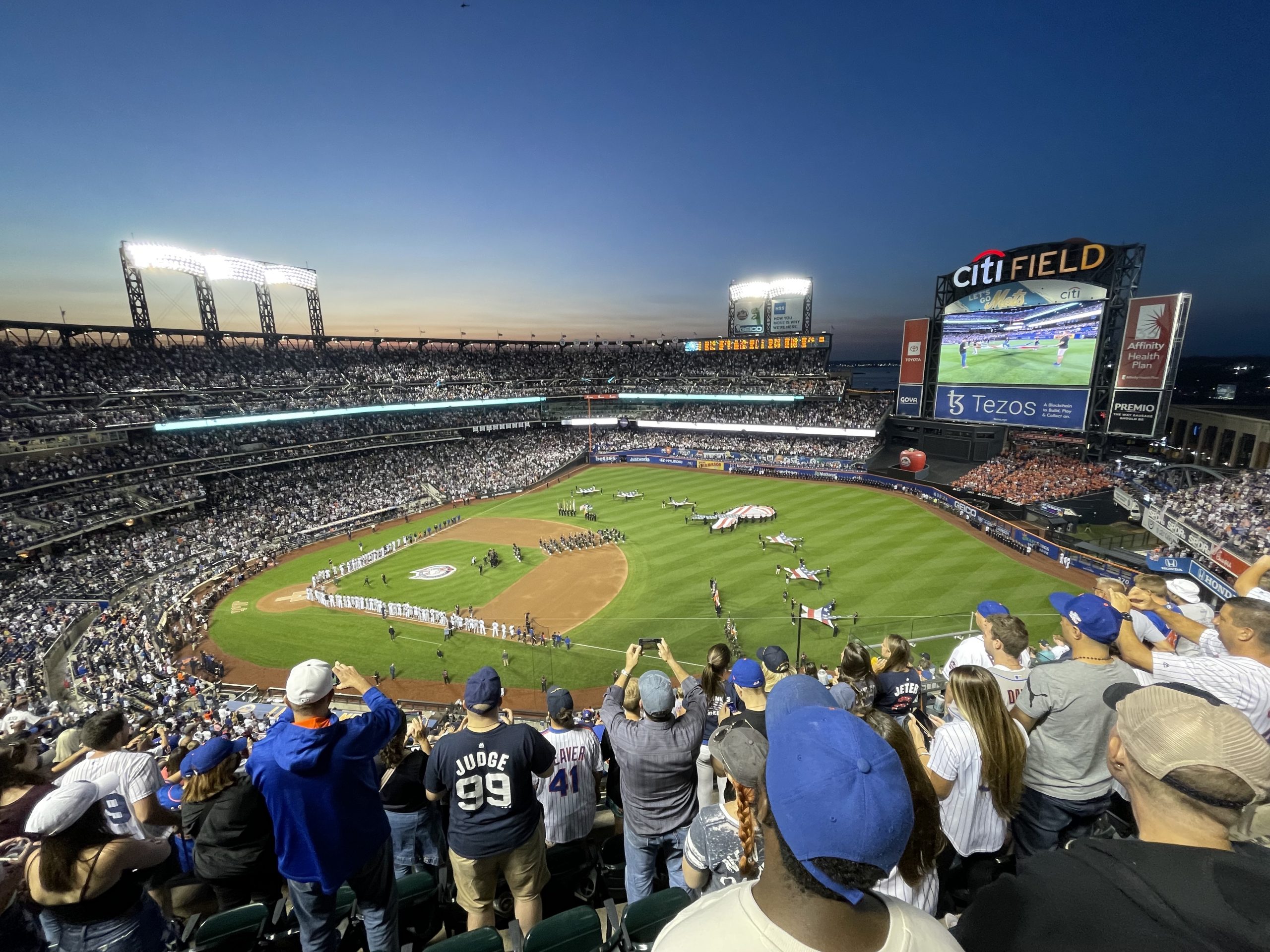 During the Mets-Yankees game on Sept. 11, 2021, first responders and law-enforcement officers participated in a pregame ceremony to honor the victims.

This unique game required a massive effort on its own, but it was also part of a bigger strategy that unfolded over the course of the day. Dubbed “4K Day,” Saturday was the first-time in the history of Fox Sports that four high-profile contests were televised in 4K HDR. Since college football is back, a trio of games across the nation — No. 12 Oregon vs. No. 3 Ohio State, No. 5 Texas A&M vs. Colorado, and Stamford vs. No. 14 USC — got in on the action. The lone baseball game in New York completed the quartet.

As is the network’s style, all these games were upconverted from 1080p HDR and available on multiple outlets: the FOX NOW and FOX Sports apps and linear outlets Xfinity, DirecTV, Dish, FiOS, Altice in New York, Fubo, and YouTube TV. Fox Sports has been broadcasting in 4K HDR for quite some time, but elevating its status to mainstream production format on this day was not a coincidence.

“This day was definitely planned,” said Cheney. “Our goal is always to bring as much 4K content to the fans as we can. When we had this baseball game, we were going to do this in 4K automatically, but, when we noticed that we’re also doing three college football games, we said, ‘Well, why can’t we make it the whole day on Fox?’”

4K Day was an example of Fox Sports’ commitment to the format and how it’s becoming more prevalent in the broadcaster’s tech toolbox. On the professional-baseball front, it was also seen during the 2021 MLB All-Star Game at Coors Field in Denver and MLB at Field of Dreams in Dyersville, IA. As the format becomes more familiar, it’ll begin to be used in more high-stakes regular-season games as time goes on.

“It’s great to see that our network is doing a lot of 4K games without waiting to do it in the postseason,” said Francisco Contreras, director, field operations, Fox Sports. “It’s a really exciting time here at Fox Sports.” 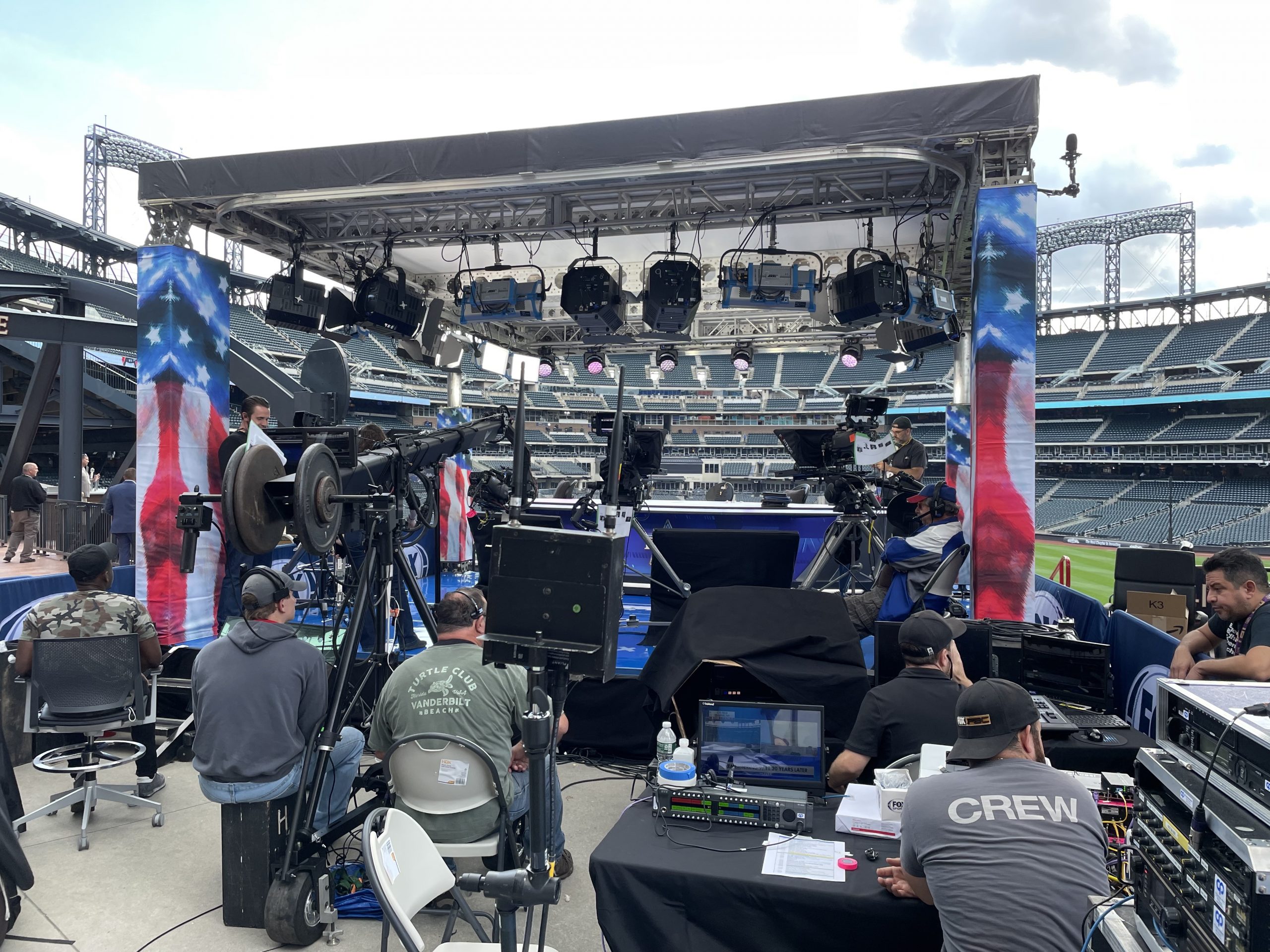 Fox MLB Pregame was produced live on a studio set in the centerfield concourse at Citi Field.

With the 2021 MLB Postseason around the corner, the network kicked into high gear with a full onsite crew in Flushing. More than 150 staffers were at the stadium, and to ensure that this game was produced with the utmost quality, the team that usually handles playoff games on Fox was in control.

In the compound, Game Creek Video’s Encore mobile units handled the production before heading out into the bulk of the network’s NFL broadcasts. The truck was also used in July’s Midsummer Classic and last month in Iowa.

For a Subway Series that garnered a lot of nationwide media attention, Fox Sports was working in a crowded compound. Friday’s game had been a local broadcast in New York, with crew members from SportsNet New York working at the stadium. Following that game, Fox Sports rolled in its infrastructure for its nationally televised game next to ESPN’s mobile unit handling the conclusion of the series for Sunday Night Baseball.

Inside the venue, a total of 26 cameras were deployed in various locations. Headlining the group was four super-slo-mo cameras, an RF MōVI that roamed the field during periods of downtime, and aeri