For the 20th anniversary of the September 11 attacks, the Mediapro Group provided multiple production services to different media and television networks for the informative coverage of the commemoration. 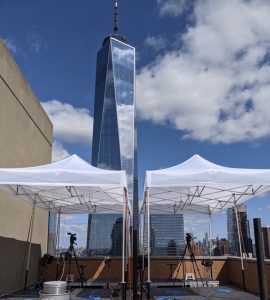 Mediapro US set up a press center, located in New York City’s downtown, to provide coverage during September 11, as well as the day before and after. This space, which had the most advanced broadcast technology, was aimed at the media, both national and foreign, who were in New York City.

The Broadcast and Media Services division of the Mediapro Group equipped different spaces for standups or full broadcast set ups during the daytime and nighttime on the 10th, 11th and 12th of September. From this location, Mediapro US offered a selection of views of the World Trade Center as well as a large newsroom with connection to the rooftop, and direct access to satellite and different delivery methods.

A team of Mediapro US professionals was in charge of providing services from this press center created for the specific occasion, as well as technical equipment such as cameras, lighting equipment, and editing.

Mediapro currently has four production centers in the US: two located in Miami, the largest of which was inaugurated only weeks ago; as well as two other centers in New York City, one in the Brooklyn Navy Yard and, the most recent, located in the heart of Manhattan.