OneSoccer, the dedicated soccer platform, is set to launch as a linear channel on Telus’ Optik TV service, broadening the channel’s reach to consumers across the country – just in time for soccer fans to watch a triple-header of Quarter-final games from the Canadian Championship, Canada Soccer’s highest domestic club competition 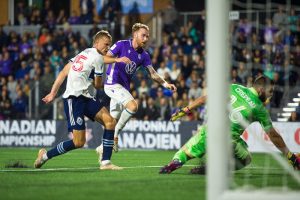 Telus Optik customers will instantly gain access to a wide range of the best of Canadian men’s and women’s soccer through OneSoccer – fully 80% of the channel’s programming is Canadian content, and an increasing percentage covers the women’s game. Viewers will enjoy the following:

“We are immensely excited and proud to be a part of Telus’ portfolio of channels going forward,” says Oscar López, CEO of MEDIAPRO Canada. “This partnership with Telus, one of Canada’s ‘big three’ telecoms companies, will allow us to showcase the best of Canadian soccer to new and existing soccer fans across the country at a time when Canadian soccer is reaching new heights. We look forward to deepening our relationship with Telus and further igniting the passion for soccer among all Canadians, from coast to coast.”