Through the first three weeks of the 2021 NFL season, notable storylines have unfolded on the field. One of the technological variety is technically being displayed on it. While most teams shoot off an extra set of fireworks or release an extra container of smoke in front of the player tunnel to start the season, the Carolina Panthers unleashed a mixed-reality (MR) panther at their home opener vs. the New York Jets on Sept. 12 and again vs. the New Orleans Saints on Sept. 19.

“The mixed-reality panther is helping us create an exciting atmosphere,” says Mike Bonner, director/executive producer, game presentation and production, Carolina Panthers. “It has been great to have this kind of innovation, and we’re looking forward to using it all season long.”

Any production proposal requires financial and executive backing. The Panthers are still figuring out their identity under David Tepper, who acquired the team three years ago. The franchise has maintained its “Keep Pounding” mantra — a large drum with the phrase is still hit prior to kickoff — but now it’s looking to begin new traditions that get the fans involved and develop a difficult environment for opposing teams. A month after the Tampa Bay Buccaneers lifted the Lombardi trophy, the Panthers went to work on brainstorming with a wide-ranging and diverse group of 40 employees, including high-ranking executives like VP/COO Mark Hart; individuals who have been with the organization since its founding in 1995, such as Director, Alumni Affairs, David Monroe; and others critical to the game-day experience, such as members of the grounds crew. 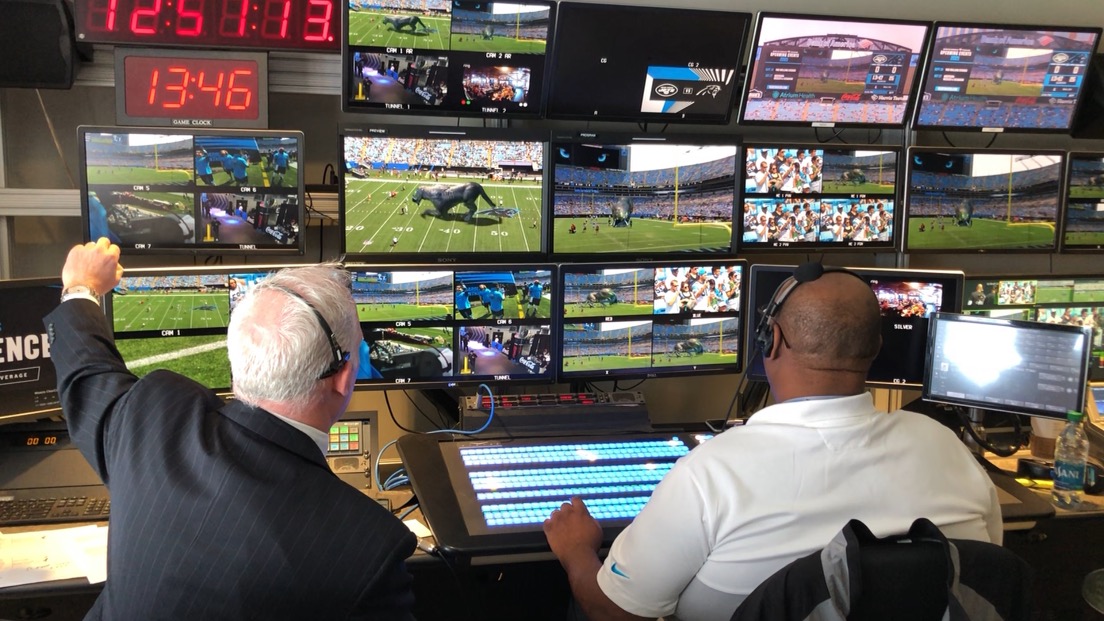 “As someone who has been here only since January 2020,” says Bonner, “[I thought it] important to know about the game-day rituals from people who have worked here for such a long time. We wanted to hear the ideas of a variety of different people.”

After a few of these meetings, the group presented its findings to David Tepper and his wife, Nicole, and received approved for the push in innovative technology. Getting the go-ahead, the staff invested in the pieces needed for the endeavor, including new replay servers from Evertz and other equipment from Grass Valley and Canon as well as a new low-end-zone camera position.

Bonner reached out to The Famous Group for assistance in August. “David and Nicole were very much behind us, so we worked with The Famous Group for seven to eight weeks,” he says. “We saw what they did before Super Bowl LIV for the NFL’s 100th anniversary and with the Baltimore Ravens in 2019, so we mentioned that we could do something like that with a black panther.”

With widespread organizational approval and a stellar idea, Bonner and The Famous Group put their plan into action. The technological backbone of the project is built within Unreal Engine from Cary, NC-based Epic Games, which also deploys the services of other vendors, such as Pixotope, Quince Imaging, and stYpe. For real-time execution that calls for quick reactions and impeccable timing, a lot of the foundation is constructed before the first regular-season game.

From The Famous Group’s perspective, the most difficult aspect was getting the MR system ready for the real-time presentation.

“The first step,” says CJ Davis, EVP, creative technology, The Famous Group, “was getting a scan of the entire stadium to know where everything is for mapping and predefining the path of where the Panther is going to run and land. In addition to that was the onsite integration of media servers and camera-tracking technology. We used a hardware encoder head that goes on the Panthers’ cameras, so they can take advantage of the broadcast system that they already have in place.” 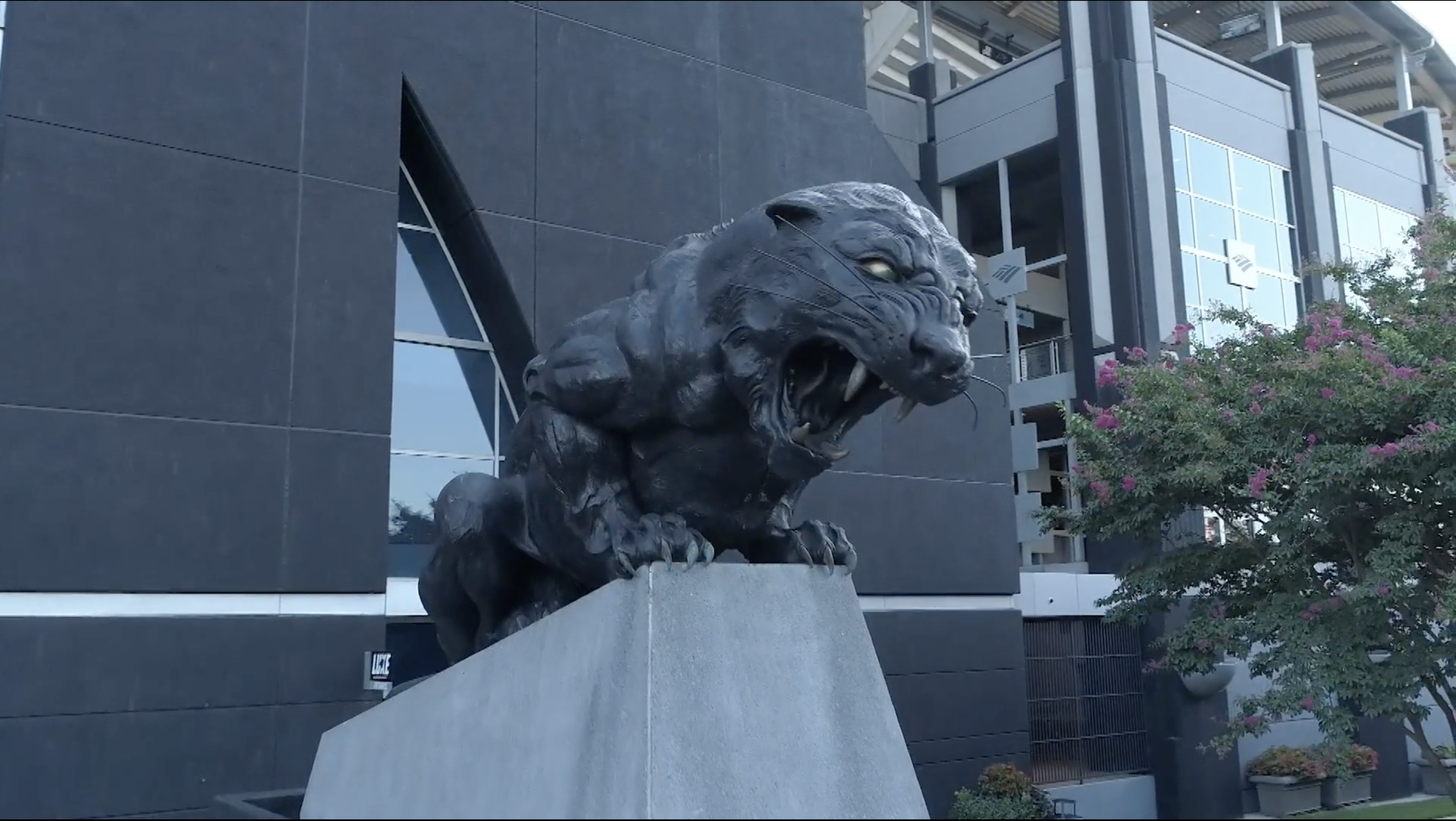 The mixed-reality panther was modeled after the statues standing outside Bank of America Stadium.

The streamlined setup has two purposes: allowing the Panthers to work with familiar equipment on a high-risk production and removing the logistical challenges that come with large-scale installations. With careful planning and a simplified approach, it also prevents last-minute mishaps with the participating devices and enables Davis and his team to develop the MR panther with precision.

“The key to success is finding out what [the Panthers] have, what’s going to work, and what isn’t,” Davis explains. “But these media servers are all designed to go right into the racks in their control room. They gave us the pan/tilt/zoom data, so, whenever that camera moves and we get that feed, we’re able to read and represent that same movement in the digital scene to make sure that the compositing happens all at the same time.”

With more and more reps, The Famous Group looks to master its working relationship with the Panthers’ production team. The goal is, eventually, to be able to leave Bonner and his crew to operate the system on their own.

“There isn’t a rule book right now,” notes Andrew Isaacson, EVP, The Famous Group. “We’re creating a template and a training program so that their control room can execute this. It’s not perfect every time. I think we’re learning a lot and writing down these best practices as we move forward.”

The final product of the detailed planning process reflected the goals established in the preseason: honor the team’s 25-year legacy, design something aesthetically pleasing, and build an infrastructure that will ignite the crowd into a frenzy. The three pillars can be seen in the panther’s leadup: a dramatic rhythm invoking the “Keep Pounding” drum and a shot of the panther statues outside the building. For its debut in Week 1, the panther walked along the side LED ribbon board, pounced onto the main videoboard, grabbed a mixed-reality version of a New York Jets banner, jumped down onto the field, hopped onto the goal post and onto the other videoboard, and leaped out of the stadium. Along with Bonner and his colleagues in the control room, camera operators Carl Russell and Mike Murden follow its movements from field level.

“Cameras 1 and 5 work out nicely with the motion of the Panther and what it’s doing,” Bonner says. “The panther comes in over Camera 1, so Camera 5 shows it jumping in. Then, Camera 1 picks up its leap up to the east board, stays on it as it rips down the flag. I cut to Camera 5 as it leaps off the board onto the field, which goes into a closeup of the panther staring and walking back and forth. I go back to Camera 1 when it jumps up through the goalpost, to the west videoboard, and out of the stadium.”

During the Jets game, fans in the venue were able to see this run on the videoboard before team introductions. In the Saints game, the timing of the panther’s appearance was different.

“I’d like to keep the fans on their toes and build that anticipation, because, when it does happen, we want them to go crazy,” says Bonner. “After the success of Week 1, we decided to try it during the game before our defense came out on the field, and it was great.”

As each week passes, The Famous Group and the Panthers are looking to refine the production. For example, since the piece ran 13 minutes before kickoff against the Jets, the field was littered with players warming up and other team personnel. In Week 2, the production value was heightened with an additional idea conceived by broadcast engineer Berkley Dickens and the participation of the Panthers mascot, Sir Purr.

“We ordered an actual Saints flag that we tattered up,” says Bonner.  “After the panther left the tattered, mixed-reality flag behind, we cut to our low Camera 3 with Sir Purr holding it.”

The MR panther instantly created so much talk in NFL circles that the Carolina Panthers tweeted out the video and have garnered 5.8 million viewers and more than 9 million impressions. It even caught the attention of television personalities, such as Food Network’s Guy Fieri. Broadcasters are tapping into the in-venue feed to show viewers at home.

“Fox Sports reached out to us after seeing the popularity of it,” says Bonner. “They took our program [feed] and rolled it into their broadcast.

Within the organization, the production crew has received positive feedback.

“The first time we rehearsed it was the Saturday before the Jets game at 2:20 p.m.,” he notes. “At about 2:25, I get a text from Mark Hart saying how awesome it was. Head coach Matt Rhule hadn’t seen it until the Saints game, and, after the game, he said it was one of the coolest things he has ever seen.”

As with many technologies that hit a bull’s-eye on the first attempt, fans are asking for more of the same. Bonner and company are answering their request with a resounding yes, and the team plans to let the MR panther roam whenever it pleases during the team’s remaining six home games.

The cohesive production can credit a relationship between Bonner and Isaacson that began two decades ago. They worked together on other NFL-based projects and the New York Yankees. “We formed a trust [for each other] early on in our careers, ,” says Isaacson. “A lot of credit goes to him for taking this risk with us.  We have an incredible circle of partners that have worked together in the past, and that’s how this project really got off the ground.”

From the franchise’s perspective, the relationship with partners and its commitment to producing an engaging in-venue show are driving the rest of the 2021 schedule.

“I think our fans deserve it, and we want that awesome experience at our stadium,” says Bonner. “We’re going to show you some pretty cool stuff, and we love working with our partners on this.”