David Belafonte is no stranger to Sennheiser. The son of music and civil rights legend Harry Belafonte, he grew up around audio equipment whether in the studio or at a concert hall, and even made an impressive career of his own that spanned recording studios, broadcast sets and live tours. As a Grammy nominated recording engineer, Emmy Award winning producer, front of house engineer and film collaborator, a red thread was always Sennheiser microphones and headphones. Today, David is squarely focused on honoring his father’s legacy, by way of the Belafonte Family Foundation’s efforts to give back to the local and global community. Even though he is no longer on the road, or mixing in New York’s renowned recording studios, his Sennheiser gear is still an important part of his workflow.

In recent years, David has taken a less active role in the creative arts and is channeling his skillsets in a completely different way. He founded the Belafonte Family Foundation with his wife Malena to carry out the work of his father by supporting institutions and creating programs that enlighten, fight prejudice and foster peace, “I shifted gears at this point in my life to put forward as much effort as possible to creating access, solutions and opportunities for disenfranchised people born into unfortunate circumstances,” says David.

Today, David is using his experiences in the pro audio world to give back to his community, most recently in support of Grace Outreach, an organization in the Bronx serving low-income women who seek to enhance their academic skills, pursue higher education and find employment. 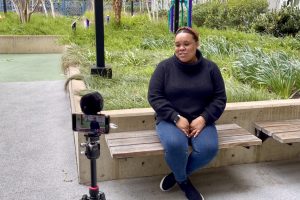 For Grace Outreach’s recent virtual fundraiser, which was a mix of pre-recorded and live-streamed content, David was tasked with creating a reel that profiled some of the women that the organization has supported by documenting their stories of overcoming intense and trying situations. He made sure to take his MKE 200 on-camera microphone to the Bronx to help him do just that, “It can be an intimidating experience when you’re in the presence of a crew and gear is everywhere. What is so beautiful about this particular setup is that it is so unintrusive and out of the way.” The MKE 200 comes with interchangeable 3.5mm locking coiled cables to offer compatibility with DSLR/M cameras and mobile devices, making it an ideal on-the-go companion for such run-and-gun film shoots. “The bulk of my capture tools are iPhone based. The freedom it gave the subject to feel like they weren’t being invaded while capturing their stories – and keeping out wind noise – is a great example of how this wonderfully low-profile gear just gets the job done.”

In the words of Margaret Grace, Founder of Grace Outreach, “the video greatly impacted the success of our virtual breakfast. Each profile of the Grace Outreach women was superb and captured the unique paths these women have traveled.” Grace continues, “From a fundraising standpoint, as a result of the exceptional quality of the video and the information conveyed, the program raised close to 40% more funds than any other past event. Everyone was so impressed by the quality of [Belafonte’s] work.” 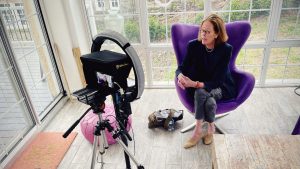 While the compact MKE 200, XSW-D Portable Lavalier Setand iPhone setup made for a discreet rig that allowed David to capture his subjects in a respectful and authentic way, it also enabled him to record excellent quality audio in a less than ideal setting, “For the run-and-gun stuff we were doing on the Grace Outreach project, at one point we were in a veritable wind storm in back of housing projects, but the mic sounded amazing with just the included dead cat.” The MKE 200 is highly directional and designed to isolate and enhance the audio, with built-in wind protection and integrated shock absorption. It also comes with the MZH 200 furry windshield in the box, which David used in this shoot to ensure crisp audio, “Is it the most expensive rig? No, but I’ll tell you what – there was a time in my youth as an engineer when often it was more about the gear than the music. At this juncture, for me, it’s simply about being able to keep your eye on the quality of the content and make sure it is the best you can deliver. The Sennheiser pieces of my versatile rig have been a time and brain saver for me.” 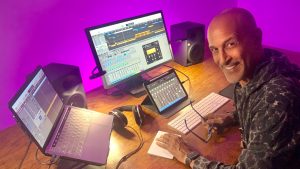 When it comes to monitoring and mixing the video after the fact, David finds comfort in Sennheiser, particularly his favorite HD 650open back headphones, “I’ve always found that using the 650s just helps me work more confidently because I know what’s going out of the door no matter where the “door” is.” He also uses a pair of Neumann KH 120monitors when editing sound.

As the Belafonte Family Foundation continues to ramp up its activities, David is excited to keep paying it forward and building on his family’s legacy. To sum it up, “It is hugely rewarding to be able to use my engineering and production background as we work to do good in this world.”