Each round will see the addition of new technology

Since 2000, every MLB champion has been crowned on Fox’s airwaves, and this year will be no different. Full crowds are back in the stands, fanbases of eight teams are eyeing a trophy, and the broadcaster is delivering productions of the American League Division Series, American League Championship Series, and World Series with high-profile technology, including all games in 4K HDR, a new graphics package, and a postseason edition of the Megalodon.

“When we talk about the growth of technology that drives our premier events,” says Brad Cheney, VP, field operations and engineering, Fox Sports, “we’re talking about 4K, which we’ll bring to this year’s ALDS for the first time. We’re very excited to have an entire postseason covered and distributed in 4K HDR.”

All October Long: Fans Can Enjoy Every Game in 4K HDR 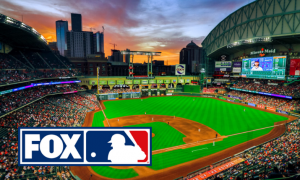 Like other marquee MLB games on the Fox schedule — such as the 2021 MLB All-Star Game, MLB at Field of Dreams, and Yankees-Mets on Sept. 11 — the entire playoff schedule on Fox will be presented in 4K HDR. The broadcaster has been bullish on this front, including a 4K Day that saw four consecutive productions in this format.

“[4K] is a really big thing for the consumer and the images people are seeing at home,” says Cheney. “It’s also a huge aspect for replay because, when you start capturing at a higher level, you can also replay at a higher level.”

This will once again be an upconvert of 1080p HDR, which is Fox Sports’ custom approach, but it is still a very significant endeavor. This offering will be made available through the FOX NOW and FOX Sports apps as well as through partners Xfinity, DirecTV, Dish Network, FiOS, Altice (NY), Fubo TV, YouTube TV, and others.

For both editions of the ALDS, the 4K HDR workflows will be shot with a hefty amount of broadcast technology. The 23-camera complement will comprise 13 hard cameras, four robotics, three handhelds and an RF camera with wide-angle lenses, and two Dreamchip cameras. Four of the main cameras will be at 6X speed. Replay will deploy eight operators.

As with a rookie’s first appearance on the field, Fox Sports will pencil-in a handful of technologies new to the postseason. Though not in the first round, the Megalodon — the network’s mirrorless Sony A1 camera with shallow–depth-of-field control — will be on the field for the two later rounds. It has been a staple on a majority of the broadcaster’s MLB circuit, as well as other properties, but, because the technology was first implemented during the NFL season last December, this will be the first time the device is used in the MLB Postseason.

This early round, though, will see the inclusion of Fox Sports’ brand-new graphics package. Developed using Maxon’s Cinema 4D and Octane Render, Fox Sports SVP, Design, Michael Dolan and his staff will provide fans with a visually cleaner look and more information presented in an engaging way.

“The new package looks absolutely amazing,” says Cheney. “Not only is it full of rich data that’s real-time–derived, but it’s also a change from something that we’ve had for a very long time, which is a look that has been shared amongst a lot of other broadcast parties. The design team knocked it out of the park to create a true MLB-centric look for Fox in the postseason.”

California Love: The Vault in Los Angeles To Help With Editing in Later Rounds

The Los Angeles-based Vault has become a valuable production asset throughout the sports calendar, but the facility will play a part in the later rounds. Editing will be one of its main functions, with two systems located offsite in the Vault and another located onsite.

“Similar to the All-Star Game and Field of Dreams, the Vault will play a critical role in the postseason for us this year, both graphically and replay-wise,” says Cheney. “We’ll also leverage it for studio coverage, and a lot of the models that [VP, Studio Operations] Rod Conti and his team have come up with are going to translate to the postseason.”

Planning for the Unknown: Mobile Units Wait for Deciding Games

The four cities participating in the ALDS will have their own mobile production units: Game Creek Video Webby in Houston, NEP NCP 11 in Chicago, Game Creek Video Yogi in Tampa Bay, and, after handling ESPN’s production of the AL Wild Card game, NEP EN2 in Boston.

Before finalizing the trucks, Fox Sports had to play a bit of a waiting game. At the end of the regular season, the American League Wild Card was headed down an interesting path, with two possible Game 163s involving the New York Yankees, Boston Red Sox, Toronto Blue Jays, and Seattle Mariners. The Rays, White Sox, and Astros having punched their tickets, three of the four mobile units had settled destinations, but the last one was a bit tricky. Once the Wild Card game was decided on the final day of the season this past Sunday, Fox Sports needed to sit tight for an additional two more days to know the fourth and final location.

The moving pieces would have presented logistical challenges for Fox Sports. If the Mariners were to host the play-in game, NEP NCP11 would have driven to South Dakota to determine whether they were going to Seattle or back to Chicago for the ALDS. If Toronto was in the mix, the quick turnaround from the Wild Card game to the start of the ALDS would have made sending an onsite crew extremely hard to do with COVID-19 protocols and testing. To solve that issue, Fox Sports was ready to set up a Home Run Production with Dome Productions mobile units. Luckily, the drive for EN2 wouldn’t have been too difficult since Boston and New York are in driving distance, but the truck ended up staying in Boston after the Red Sox victory over the Yankees on Wednesday night.

Setting the Stage: Production Tech To Ramp Up for ALCS, World Series

The start of tonight’s American League Division Series is a significant undertaking, but, as the playoffs proceed, Fox will continue to introduce onsite technology. After teams celebrate a clinching win in the Division Series and head toward the fight for the American League pennant, the arsenal will increase to 30. Additions include another hard camera, an RF MōVI unit, the Megalodon, six more robos, four more cameras at 6X speed, an aerial, two Flycam RFs, two Phantoms, two low-home robos at 6X speed, the return of Dirt Cam, two PitchNinjas with 4800 lockoff, and a robotic ball tracker. For the World Series, two more hard cameras (two Sony HDC-4800’s) will be added.

On the replay front, the eight ALDS operators will grow to 14 for the ALCS and 15 for the World Series. Audio gear will be upgraded significantly, with 14 mics buried in the dirt, five parab mics, and three RF mics inserted in the bases.

Great Time of Year: Fox Sports Gets Set for Final Month of Baseball

Overall, the broadcaster has been working toward this time of year since February, and tonight’s doubleheader will be a fitting kickoff to a very busy sports weekend, which will include the first Thursday Night Football presentation of the 2021 season, a full slate of college football, a highly anticipated nightcap between Tyson Fury and Deontay Wilder in Las Vegas on Saturday, and another Sunday of NFL contests.

“We treat the [coverage of the] American League Championship Series as the World Series since we’re putting a lot of firepower behind it,” says Cheney. “[Our technology] will be back to level when we hit the ALCS, and I think that’s a great part of what everybody on the team does, which is provide an amazing show.”

Fox begins its coverage of the 2021 MLB Postseason with an American League Division Series doubleheader. Today, the Houston Astros host the Chicago White Sox at 4:07 p.m. ET, and the Tampa Bay Rays host the Boston Red Sox at 8:07 p.m.