Pixotope has brought Broadcast augmented reality (AR) technology into the 2021 Singapore National Day Parade for the first time in the show’s history. In collaboration with Anomalyst Studio, the televised show used visual illusions that blurred the lines between reality and virtual.

Pixotope was used to generate all of the AR overlays for five segments of the large scale TV event, with the AR elements conceived as part of the show’s main narrative, including notable segments such as five stars rising up from a physical stage prop, transitioning to form a virtual display of the Singaporean national flag.

To ensure visual consistency throughout, there was a constant collaboration between Anomalyst Studio and the graphics team for the LED and floor projections. The various animated elements were created in Maya before being imported into Pixotope for playback in the main show, and after the first pass of AR visuals were complete, the lighting department sampled their lighting choreography (including 360 video samples) to use as reflection maps for the AR content. The goal for the graphics powered by Pixotope was to appear ‘invisibly seamless’, thus designers had to ensure that the displays blended as if they were live stage elements. 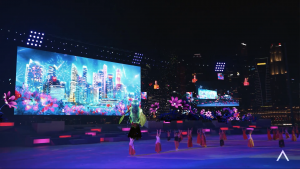 The Singapore National Day Parade was Pixotope and Anomalyst Studio’s first collaboration on a large-scale live event. With such a huge physical cast and staging to contend with throughout the event, the AR elements were choreographed precisely into the show. Anomalyst Studio’s teams were in close contact with the camera director throughout the planning, and the AR elements were then sent onto MediaCorp, the show’s broadcaster, for transmission.

“With this technology used for the first time in this famous annual event, it took a while for everyone to warm to the prospect of broadcasting AR graphics for a traditionally physical mass display show,” says Sam Leadsom, VP in Global Business Development at Pixotope. “After the first few rehearsals, the potential of having additional engaging content complemented the various live components that added an entirely new dimension to the overall show’s display.

While Anomalyst Studio had delivered previous on-screen graphics displays for the National Day Parade, due to this year’s limits on physical audience attendance, they pitched the possibility of using AR to elevate the on-screen display and engagement for home viewers. Other partners included The Show Company and XD Motion.

“Pixotope’s effective AR overlays were well received by both the committee and the thousands of viewers at home, and will have a high potential to become a mainstay for subsequent shows in years to come,” adds Leadsom.