NHL Puck Drop 2021: ESPN Director Doug Holmes and Producer Jeff Dufine on What To Expect From the Reimagined NHL on ESPN

When the NHL returns to ESPN tonight for the first time since 2004, fans will be greeted with a mix of nostalgia for the iconic NHL on ESPN coverage of yesteryear and new beginnings that go along with the launch of a new sports-broadcast era. It’s fitting that the same will be true of the duo at the front bench producing ESPN’s NHL coverage — one an NHL on ESPN veteran and one a rookie. 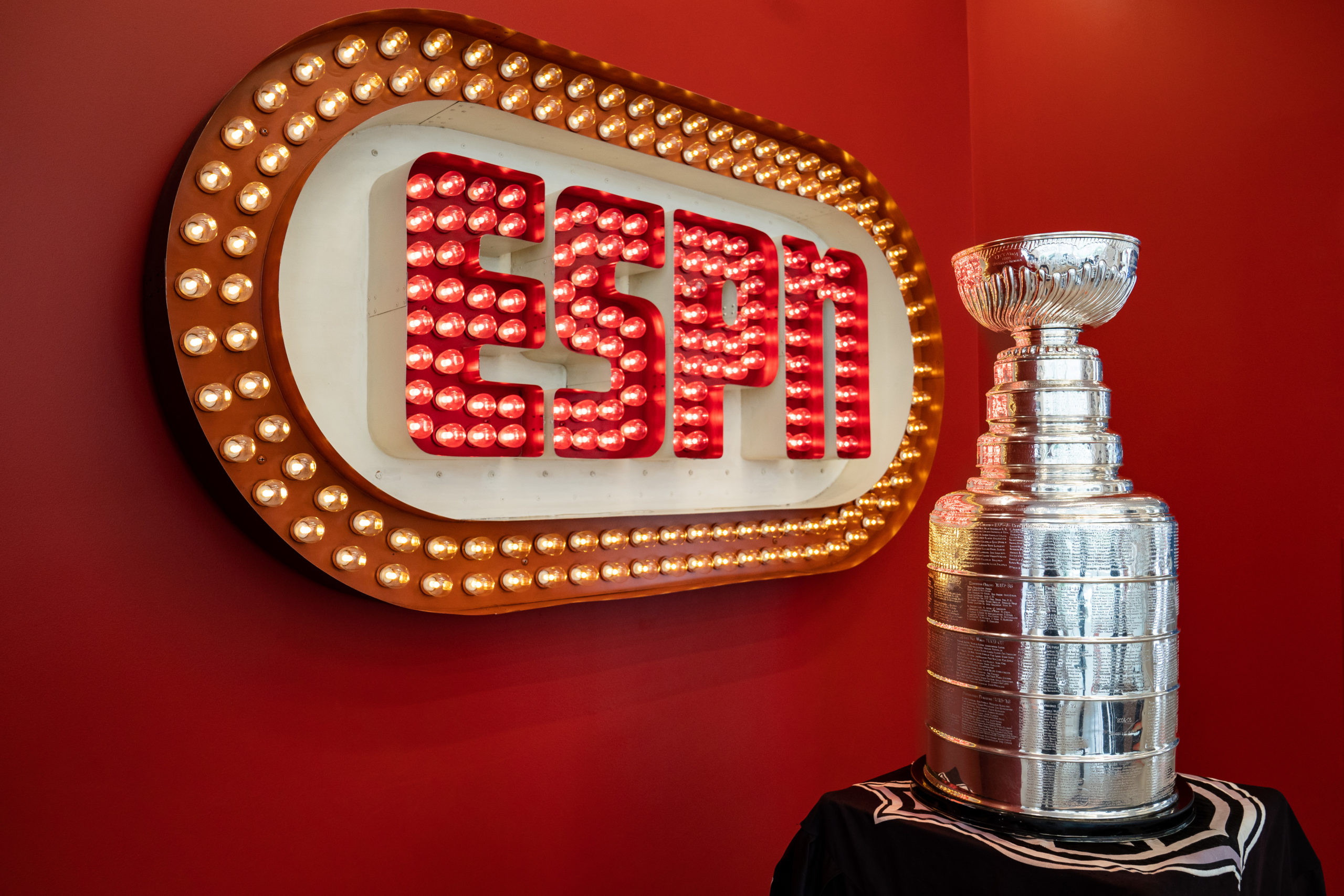 Doug Holmes is back in the director’s chair, having helmed NHL on ESPN broadcasts for more than two decades, from 1992 until the NHL rights package departed in 2004. Producer Jeff Dufine, on the other hand, will be making his NHL debut after overseeing ESPN’s Sunday Night Baseball and Saturday Primetime College Basketball in recent years alongside Holmes.

Having spent the bulk of the past five years side by side on these properties, Holmes and Dufine now embark on a new chapter — for their partnership, for ESPN, and for the game of hockey in the U.S. SVG sat down with the pair to discuss their production strategy heading into the season, what new technologies and tools we can expect, and how much it means to the largely hockey-mad ESPN workforce to have the NHL back in-house.

Can you provide a sneak peek at some of the new cameras we’ll be seeing for NHL coverage in ESPN’s broadcasts?
Holmes:
First off, aside from cameras, you’re going to see more-aggressive cutting of the game. In hockey, there are a lot of purists that don’t like to see much cutting, but one of our main goals is to speed up the game, and [aggressive cutting] is one way to do that.

Also, everyone talks about how great hockey is in person and why is it so different on television? Well, we want to get [viewers] closer to the ice because the energy is completely different when you get close to the ice. Those are two of our goals, philosophy-wise: to get close to the ice often and speed up the feel of the game. Not to the point of losing documentation, but to do it as much as we can and get as much energy in the games we possibly can.

The biggest thing is, you’re going to see a camera on the ice, which is really exciting. There has been a camera on the ice for a long time, but it’s almost exclusively just used for pregames. We’re looking into different ways to exploit that camera and get more access on the ice throughout a game as opposed to just pregame ceremonies. We wouldn’t have it [on the ice] during action, obviously, but we’re hoping to have it during longer [stoppages in play], coming out of commercial breaks, intermissions, and things of that nature.

We are also playing around with a SupraCam. [Wired aerial cameras] are not necessarily new for NHL [coverage], but we’ve got some ideas in terms of how it can be used to get closer to the ice. That is something that we think can make a difference in how you see the game. One of the biggest problems we’re always trying to solve in hockey is how to get the game camera closer. The near boards are a major blockage, so we want to get around that as best we can, and we think [SupraCam] is a great tool for that.

We also did a ton of innovation back when [we had the NHL], especially with robotics, and that’s definitely going to continue. Robotics are counted on more than ever — especially for super-mos and all the new positions that have been created. So we’re continuing to push forward on that front, and we will have a new robotic position on the reverse side in between the benches that will be on a lot of games.

And what about on the audio side of things? Will players and coaches be miked in the game, and what other strategies are you taking to boost the audio experience for viewers?

Dufine: When we say we’re going to bring the viewer closer, it’s not just about the video; it’s about the audio as well. The league in the past has been understandably proactive with providing access to the players, and it’s a great way to show their stars off. The league has been pretty receptive about [miking players]. Right now, our plan is to have at least one player miked as often as possible. We do have to go to each team and request a certain player and have them sign off on it, so obviously it’s a process. But we plan to have a player miked for both of our games on Tuesday night. It’s not something that we may do every game, but it’s something that we’re hoping to do as much as possible.

We will also have a pregame interview with an IFB for a particular player during the pre-skate that takes place about 15 minutes before we come on the air. That could be something really cool because you’ve never seen that kind of access before. It will obviously have to be rolled in whether it’s in a pregame show or in the open to the game, but it’s something that you very rarely see. So that’s exciting.

We will also have access to the locker room on some games for the coach’s pregame speech. We want to take the viewer somewhere that they very rarely go, and we think more access to the players and coaches is how to do that.

Holmes: We’re also putting a lot of emphasis on getting more ice effects. We want to hear a lot more of the action on the ice — while being safe relative to profanity and whatnot. We’re going to try to enhance the audio perspective at every game that we do. So, when we do take certain cameras or roll certain replays, you’re going to be able to hear things like you’ve never heard them before.

For example, we’re going to have more mics in the nets. Barry Melrose came over to the game last week, and he was in the booth with Leah Hextall calling a game for us in Tampa. We had two or three shots over the course of two games hit the post. And it was like something I’ve never heard before. On-air, Barry said, “These are the loudest nets I’ve ever heard.”

What can we expect from a graphics perspective, and how did you work with ESPN Creative Services to develop the new package?
Dufine: Doug and I have worked with our great creative services department here in coming up with our latest MLB look as well as our latest college-basketball look. So we were happy to work on this project with them as well. It has been months and months of work for that group, and they’ve been amazing.

On March 15, when we announced that the NHL was back on ESPN, all we had was the theme music. It’s actually an ongoing joke here amongst a lot of us, “whatever happens, at least we have the theme music!” But the overall look and creative vision has grown a lot since then.

It has been 17 years since the NHL has been on ESPN so it’s a brand-new package. We’re not reverting to what it was, but we’re also respecting the history that comes with [the NHL on ESPN] brand. It’s something new, it’s fresh, and it’s very team-color oriented. The group led by Tim O’Shaughnessy has truly created something brand new: from the scorebug to transitions and replay wipes to the insert look and full-screen graphics to virtual graphics, everything is top level.

How do you foresee the NHL EDGE puck- and player-tracking system factoring into your coverage this year?
Dufine: The tracking is something that the league has had for the players, but the puck tracking is new this year. We’ve had several conversations with SMT and the league, and it’s really encouraging. We want to continue to push that technology, and we’d like to see it on more games than you’ve seen in the past. We’re hoping to enhance our broadcast, especially from a replay-package point of view, by using their technology. The biggest thing is obviously the turnaround time: you want it to be as immediate and timely as it can be. But I think it also plays a great role, potentially recapping the game later coming out of an intermission and in our studio shows. It has a lot of different roles to be able to enhance the show.

Doug, how does it feel to be back in the director’s chair for the NHL on ESPN after all these years?
Holmes: I did it from ’92 to ’04, and we had a great run. It’s really exhilarating to be back. It truly is like riding a bike. I’ve been trying not to be the old guy saying “Well, we used to do it this way” or “We tried that before and it doesn’t work.” It’s a tough balance to bring that knowledge while also embracing change, but I’ve tried my best. It’s great to see a lot of new people, but we are using a lot of the same people that we used in the past and a lot of people that have been doing NHL all along [through the NBC Sports years].

I think Jeff and I are fortunate that we and a lot of our key people have been pretty much together year-round for the last five years or so. The comfort level in the group is really good.

Dufine: I couldn’t be more fortunate to have Doug on my right for all these years in other sports. When I was told on June 4 that I was going to take this role on, it was very comforting tp know Doug was going to be right next to me — not only his overall knowledge of the sport but also because of all the years we’ve worked together and the comfort we have with each other. A lot of our production folks and technical folks from college basketball and Sunday Night Baseball are coming aboard, which is great as well. We feel like we’re surrounded by a great cast. It has been a hell of a six months, and we’re going to roll right into Tuesday night and start something really fresh.

What does it mean to the crew and staff at ESPN to have the NHL back?
Dufine: The amount of people that have come out — not only within our company but also freelancers and people in sports-broadcast media in general — and want to be a part of the coverage has truly been overwhelming.

Holmes: Yeah, it’s amazing how many people are hardcore hockey fans at ESPN. For example, when we started working with our graphics and creative-services team, I’d say 90% are absolutely hockey nuts. I’ve heard how many people have requested specifically to work on this, which I think is pretty rare. I think it means a lot across the whole [company] to have the NHL back.