Telestream has added new functionality in its Lightspeed Live Capture platform with the introduction of new hardware interfaces – 12G and ST-2110 – in the latest version (3.3) of the system.

Lightspeed Live Capture has been used extensively at global sports events such as the FIFA Men’s and Women’s World Cup in Russia and France. At the Tokyo Games this summer, it was a central production tool used by several North American and international broadcasters. A key feature of Lightspeed Live Capture is its resilience and reliable operation, even within mission-critical live production environments. This new version enables users to capture media over 12G and ST-2110, aiding the transition to IP-based workflows.

“This new functionality is a product of customer requests,” comments Scott Matics, senior director of product management at Telestream. “In particular, the move towards IP-based production workflows is gaining momentum and this development places Lightspeed Live Capture in the vanguard of live IP production scenarios.” 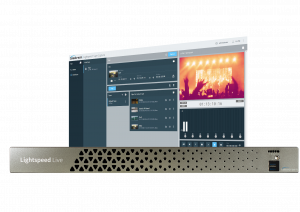 The ability to effectively edit and monetise content within large-scale ecosystems is critical. A compelling feature within Lightspeed Live Capture is its ability to ingest content for use with Edit While Capture (frame-chase) workflows on popular NLEs, both on prem or in geographically dispersed locations.

“The ability for broadcasters and OTT service providers to live stream over IP at scale with equivalent resilience and efficiency to linear broadcasts is becoming a critical business driver,” comments Matics. “These new strategic enhancements to LightSpeed Live Capture highlight our efforts to support customer needs with orchestrated IP workflows within larger content delivery ecosystems.”