Just in time for the puck to drop on the 2021 NHL season, Sportsnet opened its new state-of-the-art studio production facility in Toronto last month. Owned by Rogers Sports & Media, Sportsnet Studios brings the network’s hockey operations under the same roof as the rest of its productions for the first time and represents one of the largest and most advanced end-to-end IP-based production facilities in North America. And, despite the scale and complexity of the project, Sportsnet was able to weather innumerable pandemic-fueled challenges to launch the studio on time. 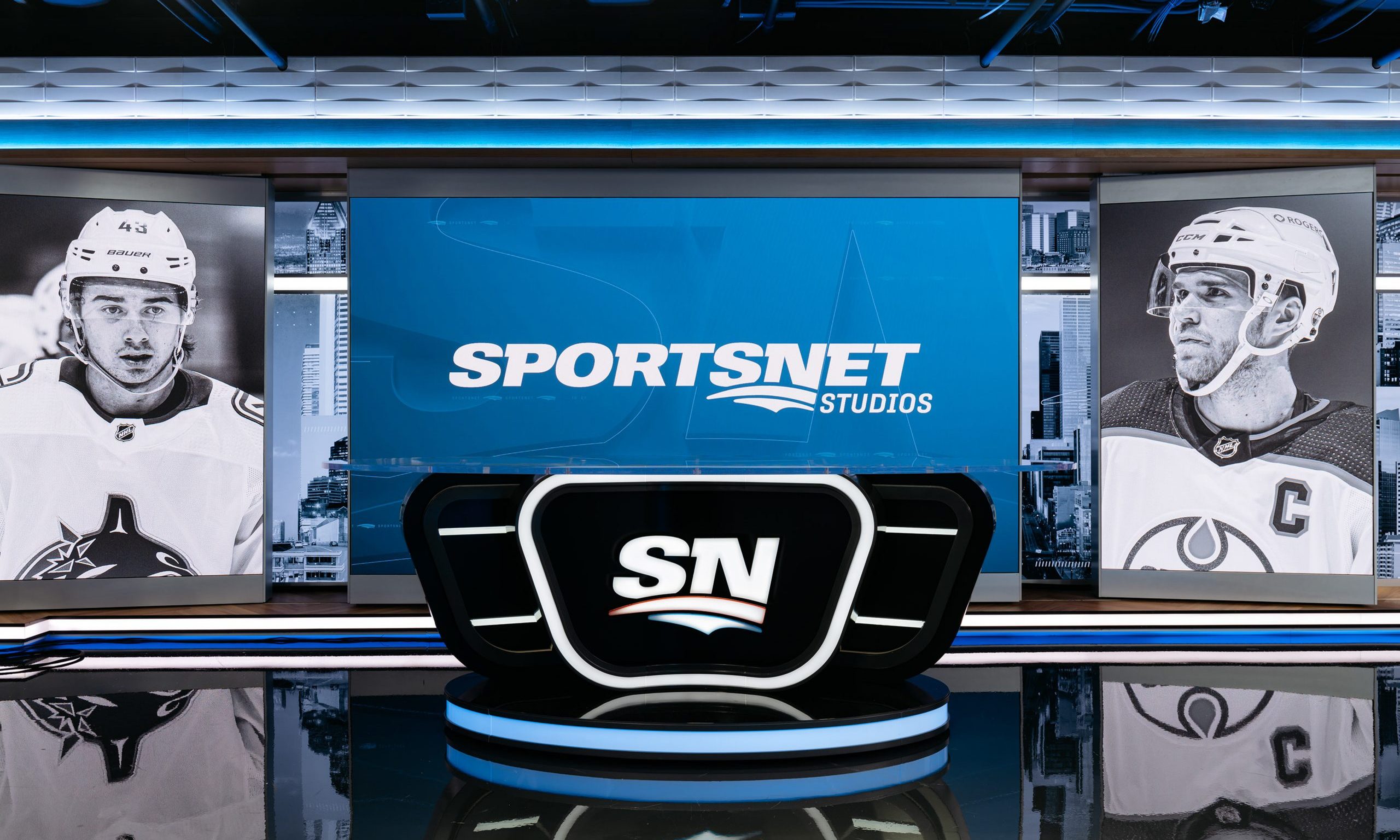 “I’ve been in this business for 25 years, and I’ve never seen as much change happen in such a short timeframe as it has during the pandemic,” says Rob Corte, VP, Sportsnet and NHL Production, Rogers Communications. “That made this [project] a major challenge. There were times when I was worried that we weren’t going to finish [the studio on time] because it was such a short timeframe. But I’m really proud to say that nobody took shortcuts and everybody checked their ego at the door so we could get to the finish line and put out a superb product.”

Linear and Digital: A ‘Reimagined Approach’ to the Traditional Hockey Broadcast

Located at the Rogers Campus at 1 Mount Pleasant Rd. in Toronto, Sportsnet Studios features two new studio sets — Studio 31 (2,500 sq. ft.) and Studio 32 (3,900 sq. ft.) —and a pair of state-of-the-art control rooms. The facility houses all Sportsnet studio operations; previously, Sportsnet’s NHL studio shows were produced out of the nearby CBC building, and all other programming was located at the Rogers Campus. 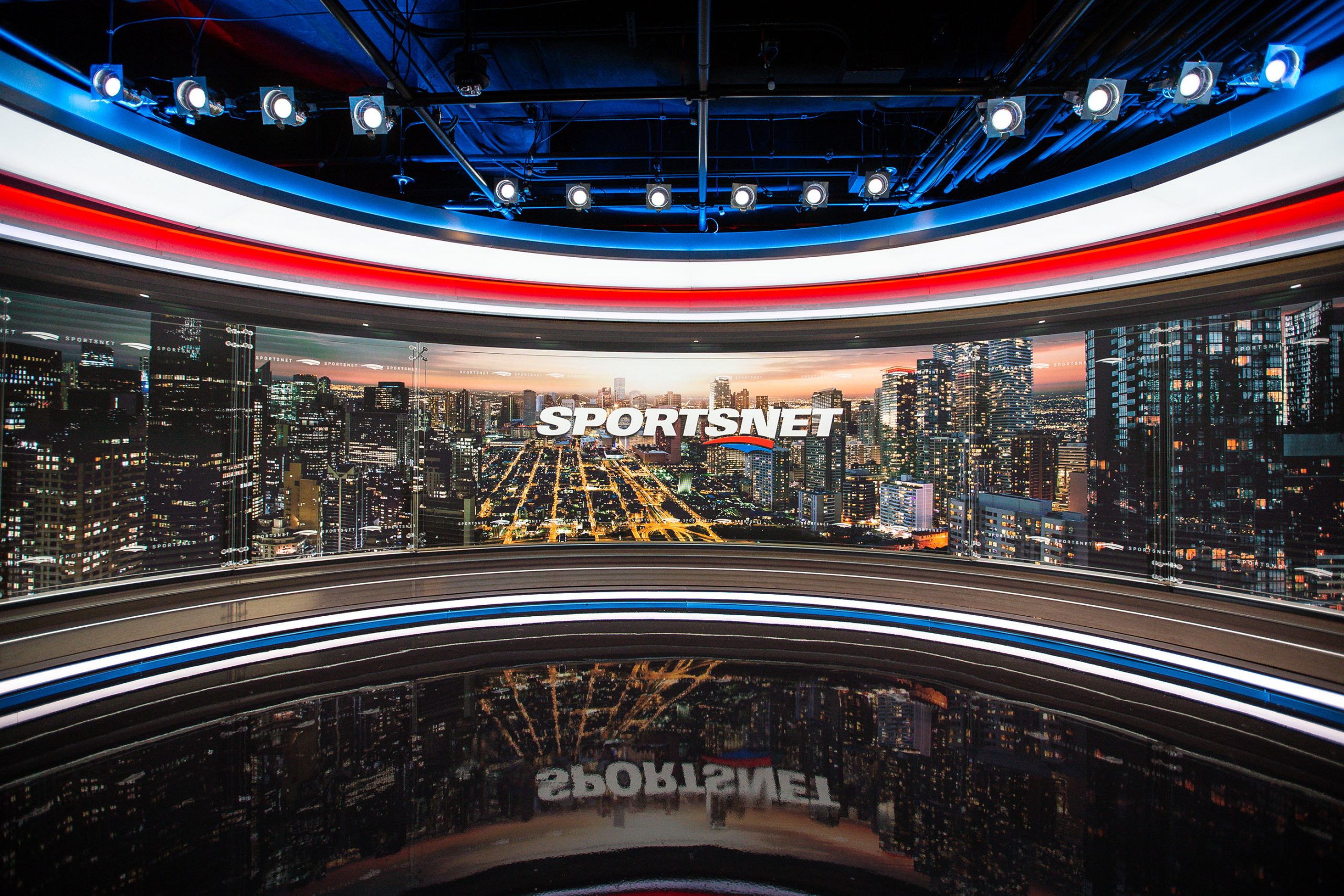 “Having two different entities in two different locations really made collaboration and communication challenging,” says Corte. “We felt it was crucial to have everybody at the same location as we do now.”

The new facility allows the NHL on Sportsnet team to create more interactive, immersive, and innovative content, with Sportsnet taking “a reimagined approach” to the traditional hockey broadcast, content production, and distribution. 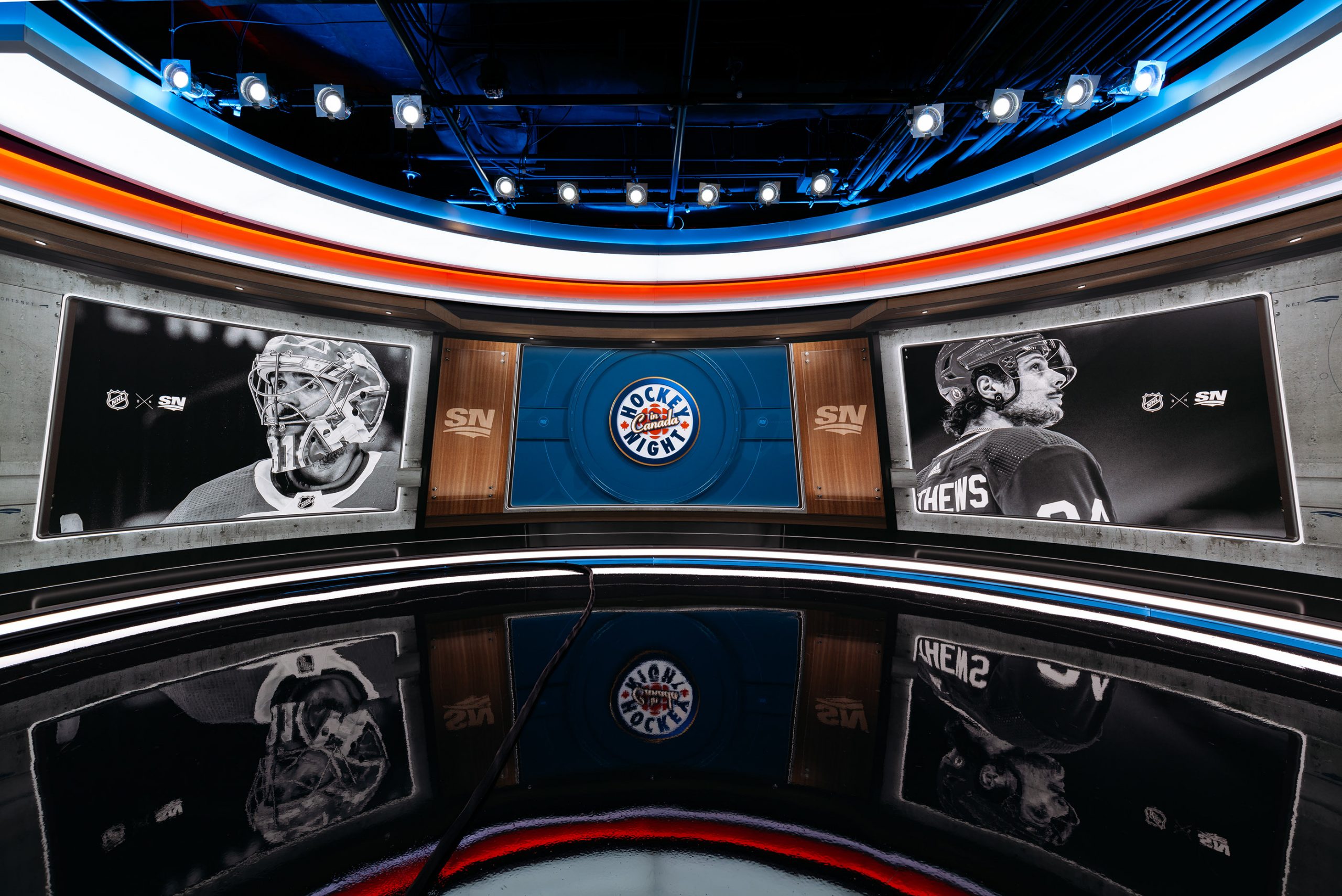 “We were looking to future-proof and bring in latest and greatest technology to set ourselves up for the future,” says Corte, “not only in live production and linear television but also for original content and all the other digital platforms that exist today. We wanted to have something that was scalable, expandable, and it was going to be able to service all our needs moving forward.”

The versatile physical space provides Sportsnet’s digital, social, and broadcast teams with a variety of options and looks for creating content. The sets were designed by Artform and built by Unit 11 and Tradesync. Combined, the two studios are equipped with 22 LED displays (delivering 1,200 sq. ft. of visible surface area), including a 50-ft. curved, floor-to-ceiling LED wall dubbed “The Cove”. In addition, Samsung IER-series LED displays will make up 13 dynamic video walls across the two studios. 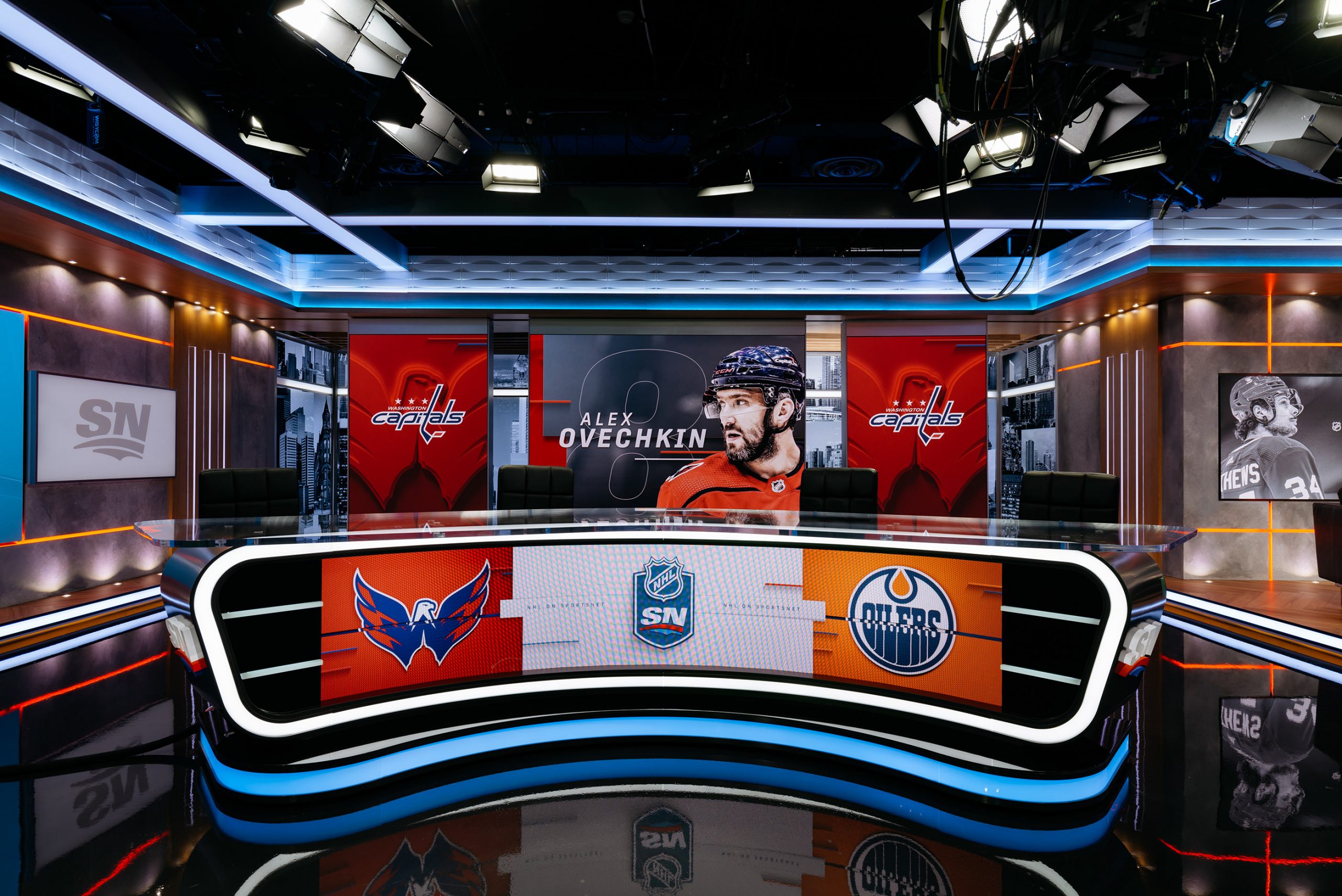 “With The Cove, we can [display] one huge image or hundreds of images,” says Corte. “We can [display] any kind of data or stats, betting information, player and puck tracking — all is real time. Sponsorship is a huge element as well. We have so much flexibility that you can customize whatever type of sponsor element our clients are looking for. With The Cove, whether it’s a live shot of a rink or a completely animated build, we can do it all.” 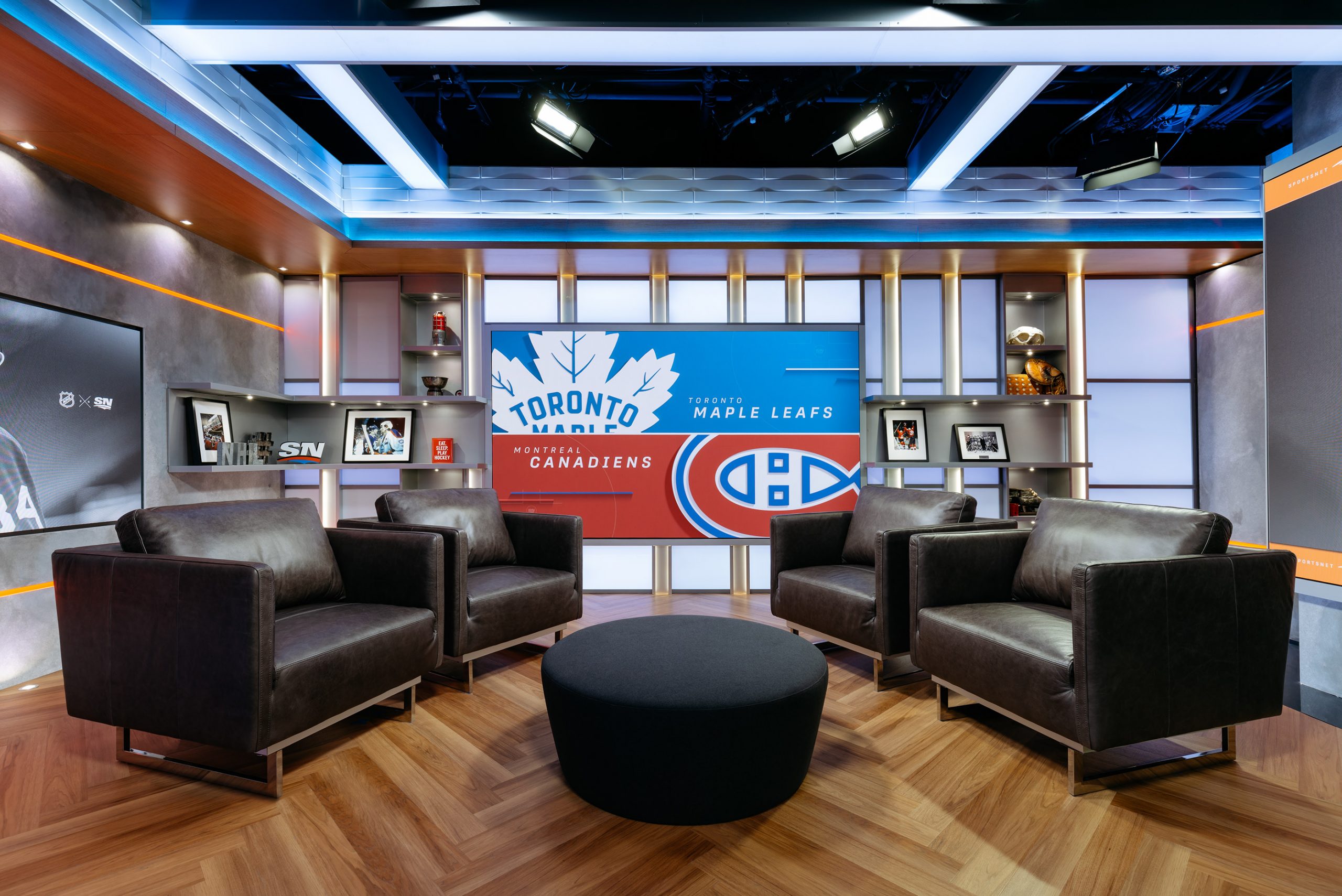 “We have ultimate flexibility in what we can do now and ultimate flexibility in the number of looks we can present to our viewers,” notes Corte. “We have monitors that can be used for almost anything, sit-down and stand-up areas that can be used interchangeably. All our desks are moveable. We have a green screen, so we can do virtual, and we are set up for augmented reality. We’re ready for whatever is coming.”

An All-IP Decision: Preparing for the Future

Sportsnet worked closely with systems integrator Diversified to design the facility around the SMPTE ST 2110 suite of IP standards, using an Evertz IP routing core in an effort to create a futureproof broadcast hub. 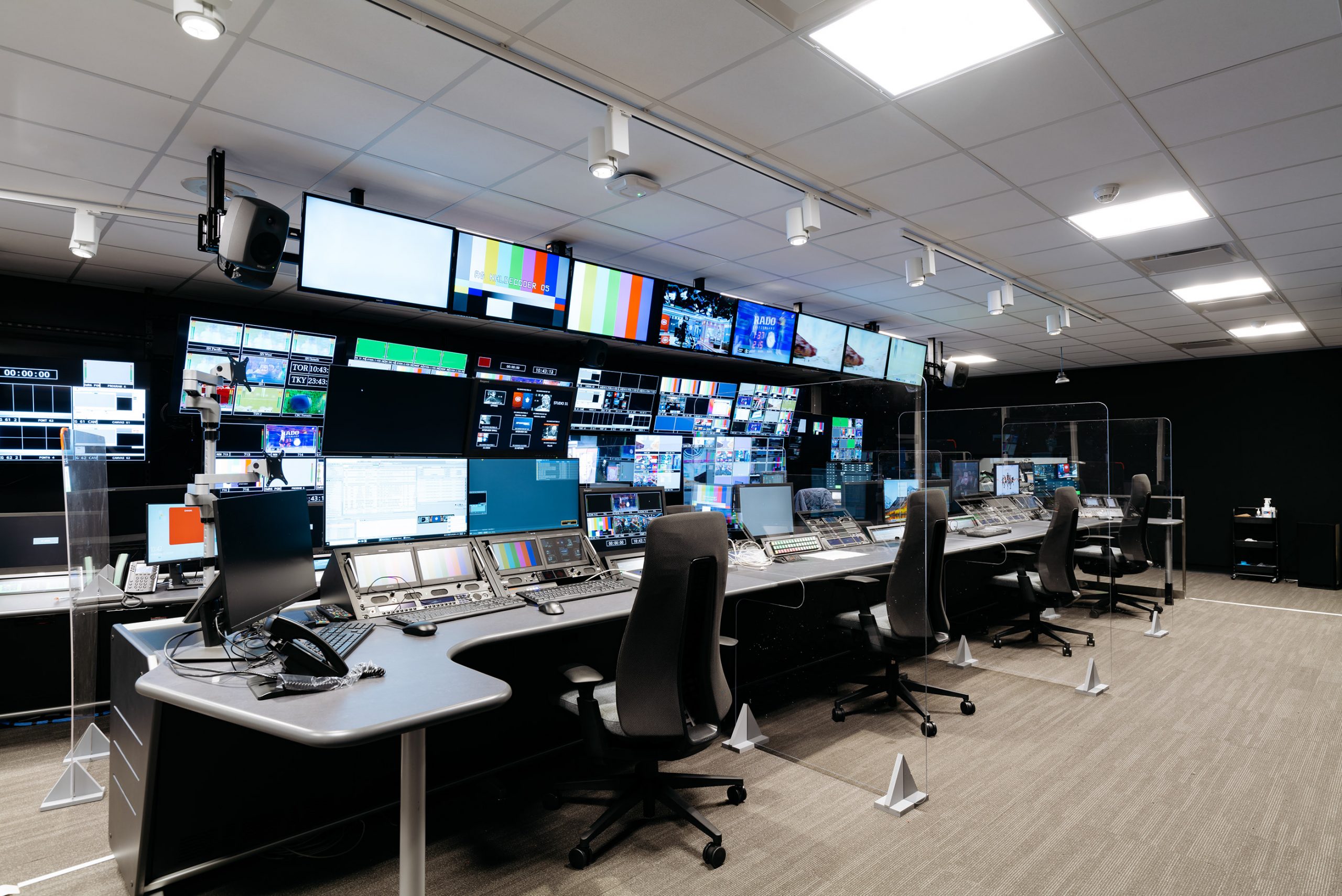 “There was no debate [on whether to go IP],” says Pierre Fortin, VP, tech media and innovation, Rogers Sports & Media. “The only debate was how to go about it. Do you go multi-vendor and do all that integration yourself, or do you go for a more end-to-end solution stack? When we evaluated all of our options, we decided to lean on Evertz to deploy the IP core for this facility. But, no, we never even considered building it in SDI.”

Rogers Media had previously launched an ST 2110-based facility with its National Media Operations Centre (NMOC) — also located at 1 Mount Pleasant — in 2016 just after the IP suite of standards was ratified. However, the ST 2110 ecosystem had matured greatly by the time the Sportsnet Studios project began in 2020 so Diversified, which had recently completed WarnerMedia’s new IP-based facility at Hudson Yards in New York City, was enlisted to help guide the project.

“This was more of a ground-up all-IP facility [compared with the NMOC],” says Fortin. “The timetable for this was very aggressive, and we didn’t have the luxury of making mistakes along the way. We wanted to lean on people who had done this before, so we worked with Diversified as our integrator, and they worked out great.” 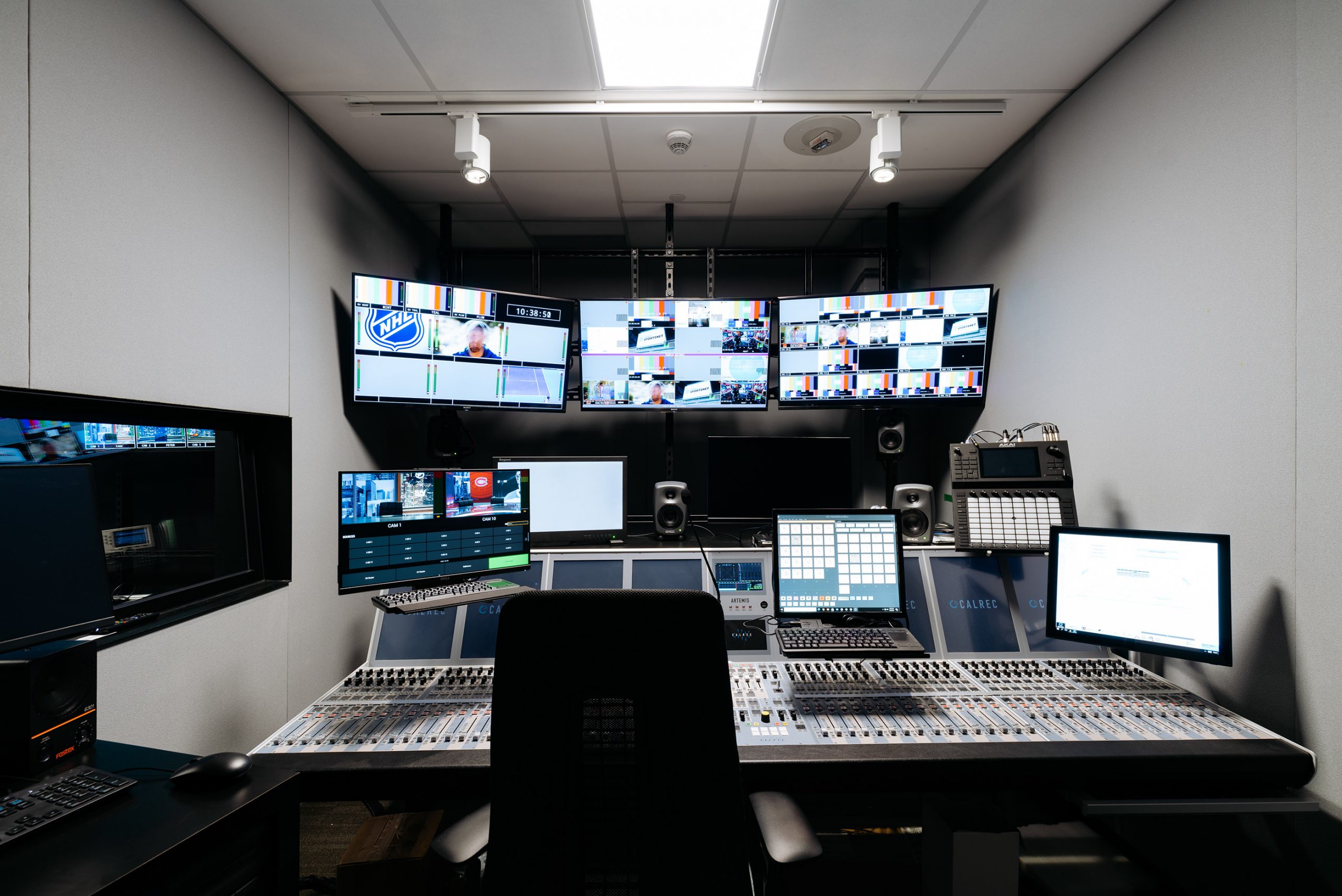 The facility is based on Evertz’s new IP switch fabric NAT-X with ST 2110 support and built-in NAT (network-address translation) to bridge IP device that don’t support NMOS. Evertz’s Ev670-X30-HW-v2 processing platform is used for SDI-to-IP (ST 2110) gateways and ST 2110 multiviewing, and the SCORPION Media Processing platform is used for up/down/crossconversion, delay, video/audio, and HDR. In addition, an Evertz audio subsystem based on the company’s 9821EMR and 57eAMR-ADMX bridges Dante audio to ST 2110-30 and mono-audio shuffling. The full system is under MAGNUM orchestration and control software with multiple VUE stations for operations.

Sportsnet Studios also features a large arsenal of Grass Valley equipment, including two Kayenne K-Frame Compact XP switchers (both native UHD and native ST 2110) and Kaleido IP COTS Multiviewers capable of supporting ST 2110 flows in addition to compressed signals. All devices are JTNM TR-1001 complaint and use AMWA IS-04 and IS-05 for interoperability between vendors.

Among other key equipment are Calrec audio consoles, Cisco routers and switchers, Ross Video Xpression Tessera multi-display graphics software, and Sony reference monitors. Signals are transported throughout the building via a whopping 50,000 ft. of video cable, 75,000 ft. of network cable, and 55,000 ft. of audio cable. 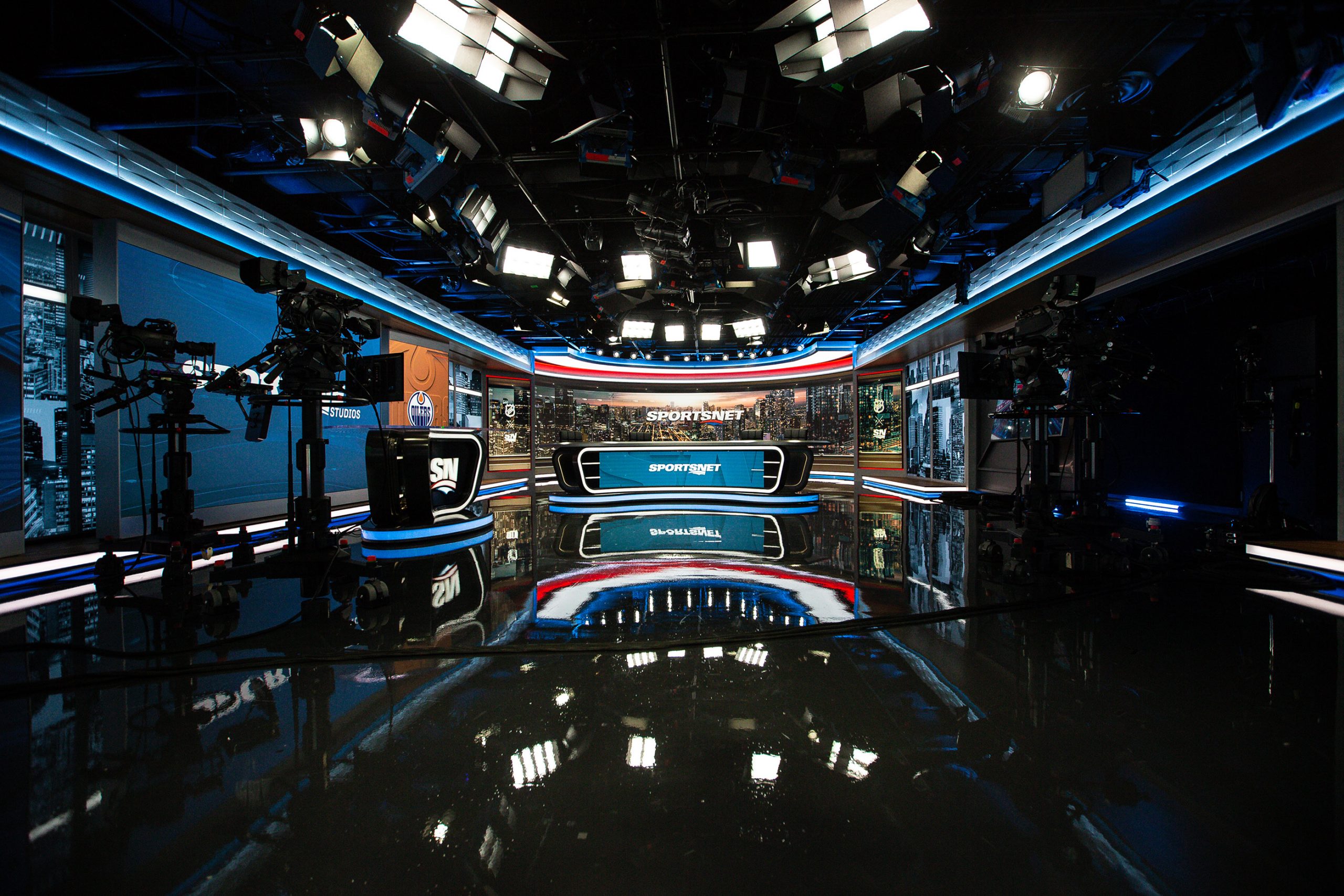 Although many new broadcast facilities have faced serious pandemic-related supply-chain issues when bringing in new equipment, the Rogers engineering team was able to get ahead of the game by making equipment decisions early on.

“In hindsight,” says Fortin, “it was a master stroke. Last fall, we were deep into designs and made the decision to pre-order some core technology even with no design finished. We pre-purchased and had them all delivered within the fiscal year in 2020. The big advantage to that was, we were able to dodge the supply-chain constraints and the chip shortages. It helped us stick to our timetable, which I don’t think would have been possible otherwise.”

AR and Virtual: Beyond the Physical Space

Sportsnet has leaned into the use of AR and virtual sets at the new facility in an effort to create a more immersive product for fans and interactive experience for talent. Leveraging Zero Density’s real-time AR/VR engine (powered by Unreal Engine) and Mo_Sys real-time AR/VR motion tracking, Sportsnet is able to create fully virtualized experiences via green screen and integrate virtual elements into the physical space. 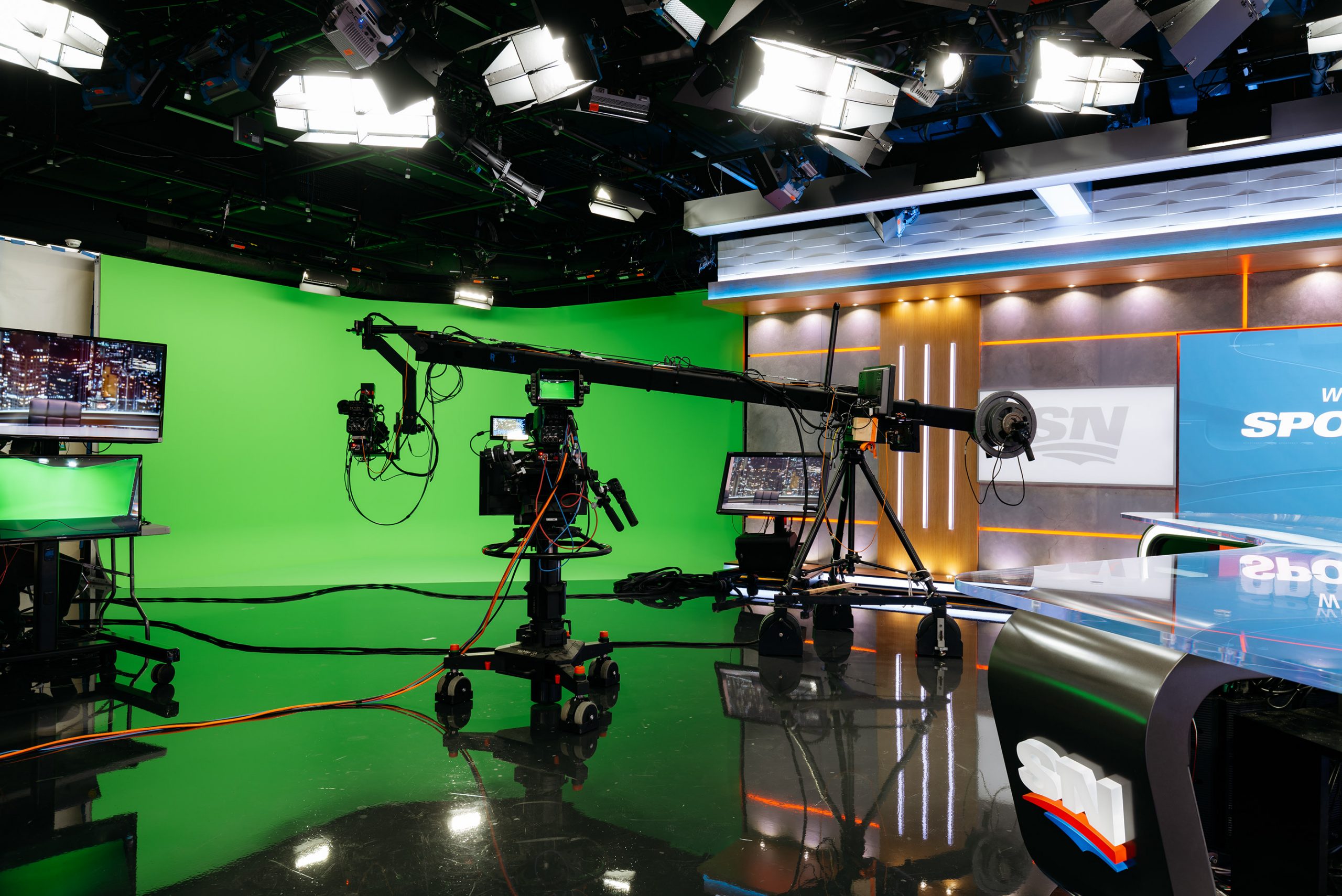 Among the highlights is the Sportsnet Stadium experience, which transports hosts, analysts, and reporters into a virtual environment using virtual-reality set extensions.

“With Sportsnet Arena, we can move our commentators in and out in different areas and change their size within the [environment],” Corte explains. “It’s a virtual environment where we can place our commentators and do all kinds of dynamic things with them. It’s not just a static shot; there can be moving video, graphics, and other [elements] in the background.”

In addition, the Sportsnet production team is developing augmented-reality technology that lifts player statistics and graphics off the screen and into 3D for a unique presentation and more dynamic visual storytelling. 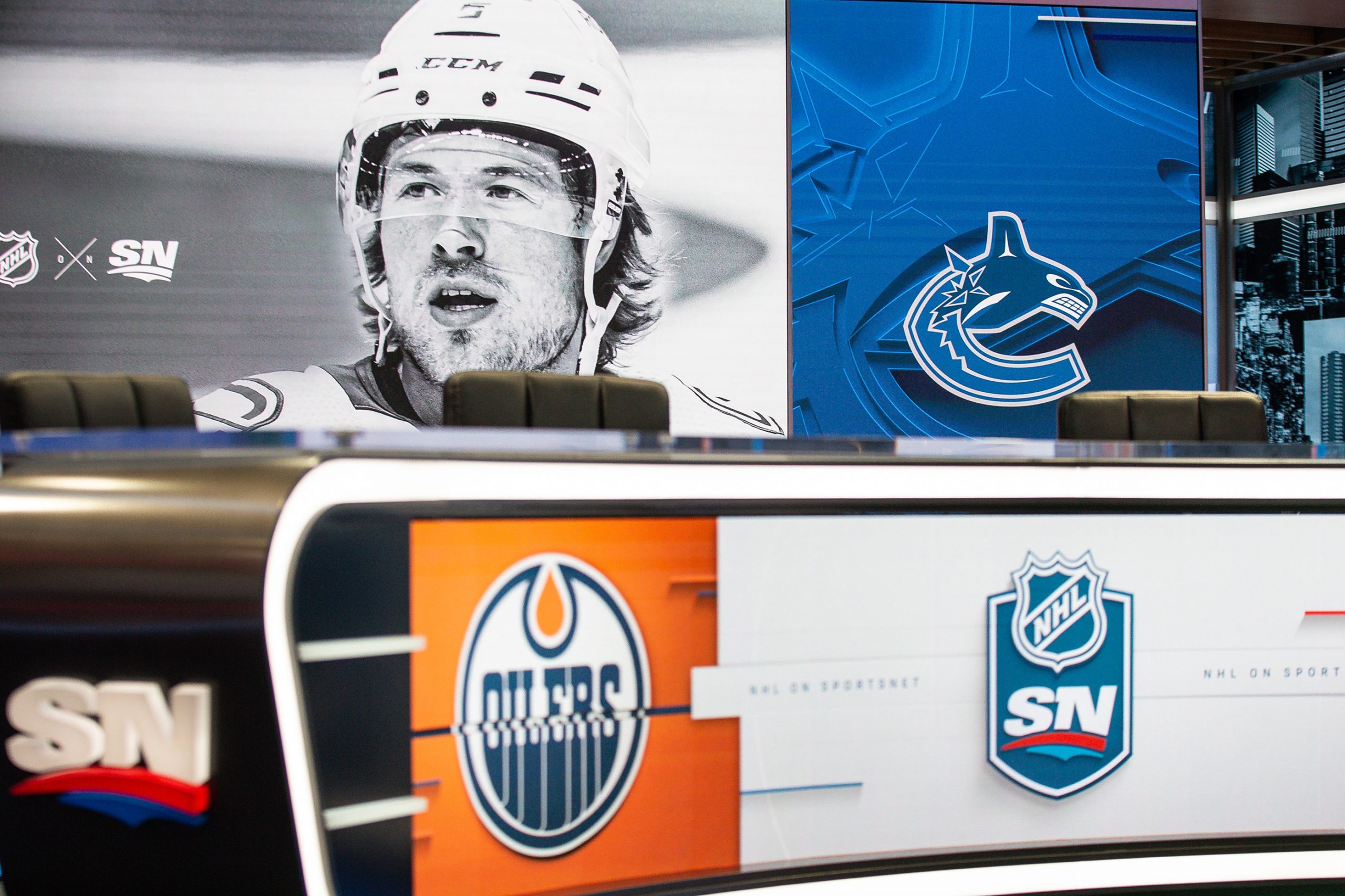 “We are really excited about what the augmented reality is going to going to bring,” says Corte. “In the old studio, when we did a sponsorship with, for example, a car company, we would have to bring the car into the studio physically, which has major challenges. But in our new space, we can bring the car in through augmented reality and can shoot it in 360, spin around the car, go inside the car. There are many things we can do. The presentation is going to be a cut above what we’ve done in the past.”

A Year in the Making: Sportsnet Studios Becomes a Reality

After more than a year of development and installation, Sportsnet Studios went live on Oct. 13 and has continued to serve as the axis on which Sportsnet’s NHL coverage spins.

“Honestly, it was surreal to see it finally up and running compared with what it was when we set off a year ago to transform the space,” says Fortin. “This would have been extremely hard to execute in normal times; to do it in a pandemic was absolutely incredible. I’m just overwhelmed with pride in what our entire team was able to accomplish under such unbelievable circumstances.” 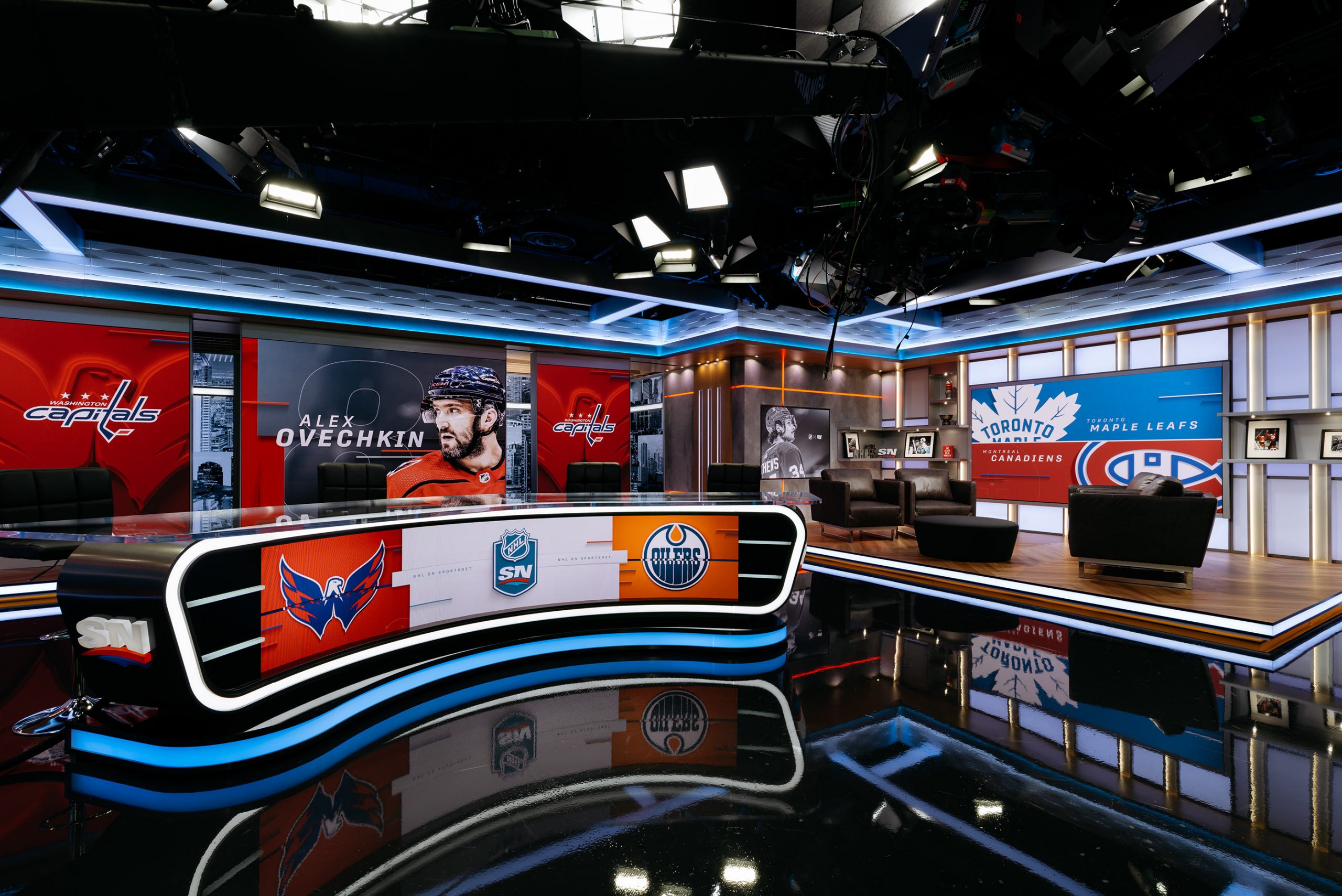 The Studio is now being deployed not only for the network’s national broadcasts — Hockey Night in Canada and Scotiabank Wednesday Night Hockey — but also for regional broadcasts across the country. And Sportsnet has plans to use the studios for a cavalcade of content beyond the NHL.

“The group has already done a tremendous job starting to utilize many parts of the studio,” says Corte. “But there are so many areas we haven’t even touched. That’s the really exciting part. We have such a long runway to get better and better at delivering world-class content.”