The National Academy of Television Arts and Sciences has awarded its Technology and Engineering Emmy to Nemal Electronics International for Standardization and Commercialization of Television-Broadcast, Hybrid Electrical, and Fiber Optic Camera Cable and Connectors.

“We have spent years designing and redesigning our SMPTE cable product line, each time enhancing performance and reliability,” says Ben Nemser, Nemal’s CEO. “Our goal was to deliver to the industry a SMPTE cable solution which is user friendly as well as both technically and economically viable. The industry needed a SMPTE cable which not only met the performance specifications but also had the durability to maintain that performance under real world conditions. Early industry designs suffered from fiber limitations and premature failures, and there was no option for users to easily adapt to existing infrastructure. This prevented many from making the transition to the new standards”.

The Technology & Engineering Emmy Awards are awarded to a company for developments and/or standardization involved in engineering technologies that either represent so extensive an improvement on existing methods or are so innovative in nature that they materially have affected television. This reward recognizes the contributions that Nemal has made to the industry through its extensive development and improvement of SMPTE cabling systems, beginning more than 20 years ago, through its latest innovation, (UL) CMP Plenum Rated Stadium 4 Cable. 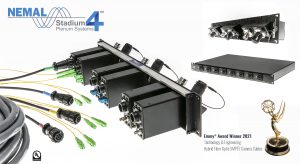 “We reached these goals by designing and building our own equipment specifically for manufacturing SMPTE cable and by offering a user-friendly family of SMPTE cable products,” adds Nemser.  “Together with improvements in raw fiber technology, our SMPTE cables today far outperform the previous generation of cable and have overcome those significant drawbacks. Clients who previously hesitated to adopt the new technology have decided to move forward with projects simply because our Stadium-4 Plenum System made it affordable and feasible. The Emmy Award, as recognition for these efforts, is a great honor to our company and reflects the technological expertise, creativity, dedication, and persistence of all of our team members who worked to make it possible.”

Nemal’s contribution to HD Broadcast Camera interconnectivity includes a wide range of cables from 4mm-12mm, with specific designs for harsh environments, studio use, ultra-flexible and lightweight, multi-channel, and (UL) riser or plenum rated. All of the major US broadcast networks have chosen Nemal SMPTE cables for their most critical applications because they perform reliably in diverse and challenging broadcast environments over the long run.

“It’s critical to select the optimum combination of cable, together with connectors, panels, and accessories so that the system performs to the applicable standard,” says Daniel Ritts, Nemal’s VP of Engineering. “Cables and other components that were suitable for 3G may not meet the new standards for UHD of up to 24Gb/s. Our experience, both in manufacturing and in the field, allows us to offer our customers the most effective solution for their application, both now and in the future.”

Nemal will receive its award during the 72nd Annual Technology & Engineering Emmys 2021 ceremony, which will be held virtually via OTT on Thursday, Nov. 4th, at 8 p.m. ET.