Broadcast Services International has been selected by NBC Telemundo to provide engineering, design, and integration services for the 2022 Men’s FIFA World Cup broadcast in Doha, Qatar. Continuing from successful contracts with Telemundo in Moscow, Russia 2018 and again in 2019 for both Women’s World Cup and Copa America.

In 2019 Telemundo required simultaneous connections between Paris, France, Rio de Janeiro, Brazil, and the main broadcast center at Telemundo studios in Miami, Florida. This provided BSI the opportunity to develop and deploy seamless remote workflows between three continents. Looking towards the 2022 FIFA World Cup, BSI will once again be providing engineering services for Telemundo which will include an IBC build along with various location and venue kits that will be positioned through out the competition venues and surrounding area. 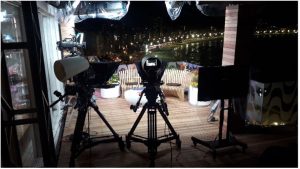 “Telemundo is a great client to work with, they are a very progressive and forward-thinking company which pairs very well with our ethos at BSI,” says Jim Eady, CEO, Broadcast Services International. “We have developed a wonderful relationship with the team at Telemundo and we look forward to building on that in 2022 and beyond.”