Media Mobil (MMG) is a German provider of outside broadcast services to the MDR group of stations and other third-party broadcasters. Headquartered in the picturesque city of Leipzig, the company recently decided to add another OB vehicle to its fleet and reached out to Ross Diamond Elite partners MCI in Hamburg for assistance in specifying the vehicle, ensuring it would meet both their short and longer-term needs.

“We were very comfortable with the idea of investing in a new vehicle,” comments Robert Hänsel, Managing Director of MMG/MCS, “but of course we always have to be mindful of changes in technology and workflows. We wanted a compact vehicle that would be ideal for smaller sports and music productions along with elections and other live events, but there often has to be a trade off between vehicle size and production power.” Fortunately, MCI were able to propose one of the latest Hyperconverged solutions from Ross to equip the OB van with production capabilities belying its modest size. With the emphasis on a 12G 4K UHD single link signal structure, MCI specified the latest Ultrix Acuity from Ross – a new platform that brings together the flagship Acuity production switcher and the multi-award-winning Ultrix routing and AV processing solution. 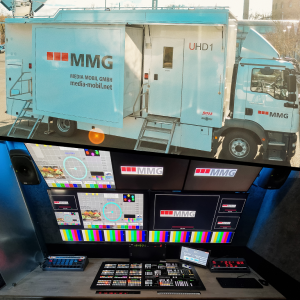 “It is important to use equipment that is space-saving and effective when we’re working in space-constrained production environments,” notes Nicolai Gajek, Sales Manager at MCI. “With the Ultrix Acuity we go one step further. It has already been designed with future production standards in mind. All common signal standards can be processed in a single device. This ensures interoperability in any production environment.”

Ultrix Acuity hyperconverges the powerful functionality of two products to create a complete, future-proof platform that is truly greater than the sum of its parts. Ultrix Acuity takes routing, audio mixing, MultiViewers, trays of frame syncs and audio embedders/de-embedders – all solutions that have traditionally filled multiple equipment racks – and compresses them all down to a single 5RU chassis.

“We were incredibly impressed with the specification of the Ultrix Acuity,” says Robert Hänsel Managing Director of MMG/MCS. “It brings many important features together in one single compact solution, and it represents excellent value for money.” In addition, Ultrix Acuity is also a software-defined platform, meaning that future features can be enabled via software license, without having to purchase additional hardware.

“We’re delighted with our new vehicle,” summarizes Marcus Mathy, Deputy Technical Director at MMG. “Its performance really gives us a competitive edge in the German market and will make a big difference to our business. The Ultrix Acuity will sit right at the heart of our workflows and will help us work more quickly, efficiently and economically than ever before. As far as tomorrow is concerned, the Ultrix Acuity can already handle IP-based workflows so we can easily move to IP if we feel that’s right for us. While nobody can predict the future, I’m confident we’re now in great shape to meet the production needs of our clients, whatever they throw at us.”