Additional technologies will be introduced each round

After one of the more unpredictable NFL regular seasons in recent memory, the calendar has flipped to 2022, and the remaining 14 franchises will compete to play in Super Bowl LVI on Feb. 13. Despite the surprise victories and shocking upsets seen over the past four months, Fox Sports’ unrelenting commitment to technological ingenuity will most certainly continue throughout the postseason.

“The best way to describe what our playoff coverage will look like is taking everything from Thursday Night Football, everything from A game on Sunday, and putting it into one package,” says Kevin Callahan, VP, field operations and engineering, Fox Sports. “We’re working on some things behind the scenes to enhance the viewing experience.”

Not wasting any time, Fox Sports will kick off its playoff slate with a full 1080p HDR production of the first NFC Wild Card Game of Sunday’s doubleheader. The decision was influenced by Fox Sports’ continued support of widespread 1080p HDR and 4K HDR presentations of some of sport’s most high-profile games: last season’s NFL Playoffs, the 2021 MLB All-Star Game in July, the 2021 MLB at Field of Dreams game in early August, the 2021 MLS All-Star Game in late August, MLB on 9/11 in September, to name a few. To accentuate the effort, the crew will be improving the camera complement normally deployed for its main NFL games and TNF, including two additional high-frame-rate cameras and a total of 12 pylon cameras with six in each end zone. The added technology will also provide views of each back line for coverage of all boundaries. 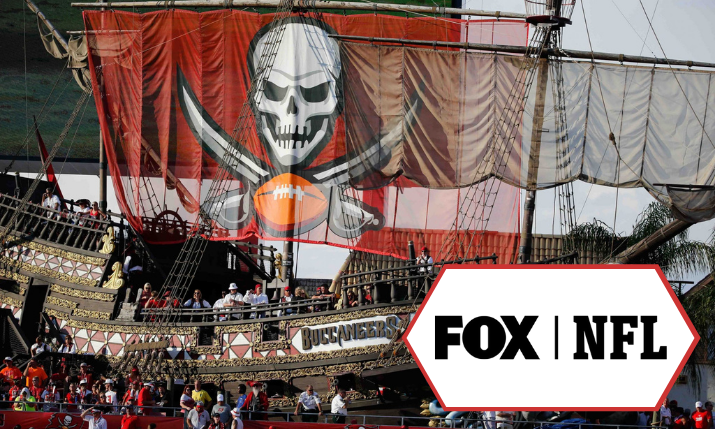 Game Creek Video’s Encore (A,B, and C units), the main Thursday Night Football production unit, will be positioned outside Raymond James Stadium and drive the Wild Card production. Given its sheer size and capability of housing a large number of technologies, the crew will have additional EVS operators onsite and won’t have to worry about using another truck to accommodate for the increase.

As the playoffs progress toward the NFC Championship on Sunday, Jan. 30, the broadcaster will upgrade its arsenal for enhanced angles. One Megalodon system will be deployed for the first two rounds, but the penultimate round will get a second. One rig will follow the action on the field, interactions on the sideline, and end-zone celebrations after touchdowns; the other will be responsible of capturing the energy of the venue.

“That’s going to be focused primarily on the atmosphere and will be up in the crowd for shots of the fans,” says Callahan. “We want to get [those scenes] in order to translate the game-day environment for the fans watching at home.”

In addition, the Line to Gain 2.0 — a pylon camera developed with C360 and 3G Wireless — will be situated at the line of scrimmage.

As in the regular season, the Vault in Los Angeles will be a vital source for remote workflows used throughout the playoffs. The first game in Tampa, FL, for example, will rely on six EVS operators and one of three graphics operators located at the Vault. Although the offsite effort has been essential all season long, the consequences of the COVID-19 pandemic and the most recent Omicron surge have impacted workflows. More specifically, nationwide travel disruptions have made the Vault an even more valuable asset.

“We’ve had some people who couldn’t get to games,” notes Callahan. “We’d cover them by adding positions in the Vault. We’ve been COVID-safe within the mobile units in terms of social distancing, masks, and testing, and we haven’t had to make significant changes. But we’re always prepared to add [more health and safety restrictions] if we need to.”

If flight cancellations and other forms of delay continue over the next month, the Vault will be the broadcaster’s saving grace. As another logistical challenge, the nature of the playoffs generates countless permutations. Based on the NFC side of the bracket and the results of the first round, the production crew could be working in a wide variety of stadiums for the NFC Championship: the freezing temperatures of Green Bay, a cozier setting in Dallas, the warm climate of Los Angeles, in the Bay Area of San Francisco, subtropical Tampa. If the road leads to Inglewood’s SoFi Stadium, it’ll be a quick turnaround to get out of the compound and let NBC Sports set up its infrastructure for the final game of the NFL calendar.

“It would be a very interesting scenario if it played out that way,” adds Callahan. “It has gotten very close a couple of times over the past 10 years.”

2021-22 can be considered an improvement over the 2020-21 campaign, but it was drastically different than from the years before the onset of the COVID-19 pandemic. Travel issues, game postponements, and rescheduling contests to weekdays, Fox Sports overcame its share of hurdles. Despite the obstacles, a lot of positives came out of all of these productions.

“It wasn’t the COVID-free season that everyone was hoping for, but everyone did a fantastic job bringing these games to air,” Callahan says. “At the start of the season, one of the key drivers [of our broadcasts] was highlighting, hearing, and making the fans back in the stands a part of the experience. I think we really did deliver on that.”

These small victories have come together to create one large-scale achievement, which is leading up to a marquee year for Fox Sports. Most notably, the broadcaster will begin to work toward c LVII at State Farm Stadium in Glendale, AZ, on Feb. 12, 2023. Prior to that day, the main goal is to offer a well-rounded production of the current playoff slate.

“We’re really excited with some of the things we’ve been able to do this season, including drone coverage,” says Callahan. “We’re always looking towards our Super Bowl year, and a lot of our testing will start during next year’s preseason, but we don’t want to compromise our game coverage at all for the playoffs.”

Coverage of the Tampa Bay Buccaneers vs. the Philadelphia Eagles in the NFC Wild Card Game at Raymond James Stadium on Sunday, Jan. 16 will begin with Fox NFL Kickoff at 11 a.m. ET. Stay tuned to sportsvideo.org for more of SVG’s NFL Playoffs 2022 coverage in the coming days.