After taking home a pair of Sports Emmys for last year’s NFL Wild Card Game coverage, CBS Sports and Nickelodeon are back with another innovative simulcast for Sunday’s 49ers-Cowboys matchup. The alternative presentation (the traditional broadcast will air on CBS) will once again be driven by a surfeit of enhanced graphics and augmented-reality elements featuring Nickelodeon characters and the network’s signature green slime. This year, however, these elements will be available in real time and on first replays for the first time.

“Everything has been enhanced this year, especially on the animation side,” says CBS Sports producer Shawn Robbins, who is coordinating producer for the game and Nick’s weekly NFL Slimetime studio show. “What the graphics team brought to the table last year was super fun and innovative, and they’re taking it to the next level this year. We’ll have higher-end animations and will be able to turn them around much quicker, which will really make a difference.”

This year’s NFL Wild Card Game on Nickelodeon will feature enhanced original on-field graphics created by Nick’s in-house graphics team, upgraded AR elements (a blimp flying throughout the stadium, the return of the “Slime Zone” cannons on scoring plays, SpongeBob and Patrick graphics between the uprights reacting to field goals), and player-tracking graphics that use slime trails to show the routes of receivers on first replays.

Most important, many of the graphics can be integrated into the broadcast live or in near real time. Last year, the onsite production truck sent clips to Nickelodeon HQ in New York City, where the graphics team applied elements as fast as possible using Adobe After Effects, and then sent graphic back to the truck to be aired. This year, CBS Sports and Nickelodeon have partnered with The Famous Group to create a real-time/quick-turnaround AR graphics workflow based on Epic Games’ Unreal Engine. 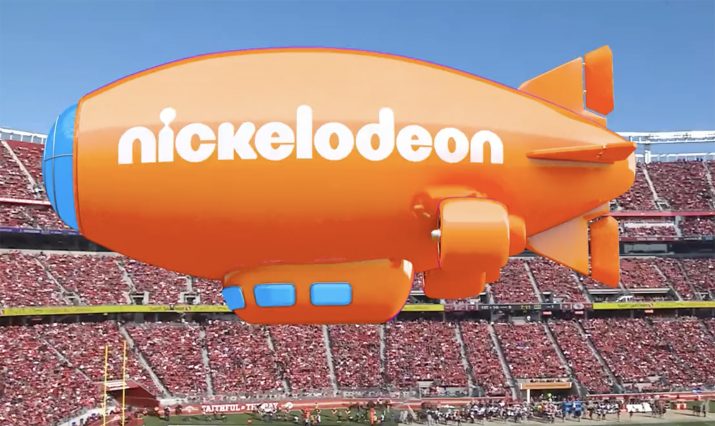 An AR blimp graphic will be flying throughout the stadium during Nickelodeon’s broadcast.

“One of the goals that came down from our senior leadership for this year was to have the graphics be as close to real time as possible – or even live — for the viewer,” says Kurt Hartman, VP, animation/motion graphics, Nickelodeon. “What we did last year worked great, and we will continue to use [that workflow] this year for some things, but we wanted to allow [viewers] to see these graphics live rather than in just replays or bumpers.

“Everything is running in Unreal Engine now,” he continues, “allowing us to do things in real time rather than with pre-renders, which we had to deal with last year. We feel like that is going to make this year’s game a version 2.0.”

The most visible new element in this year’s Nick broadcast will be an AR-powered blimp (based on the iconic Kids Choice Awards blimp trophy) flying throughout the stadium during the game. Although there was briefly a pre-rendered blimp graphic in last year’s telecast, this year’s AR version running in Unreal Engine will cast lifelike shadows on the field, adjust to time of day, and allow cameras to zoom in and out while it’s in frame. In addition to dumping slime on the field and lighting up when teams enter the red zone, the blimp can open up its side and display video, such as replays, crowd shots, or graphics. 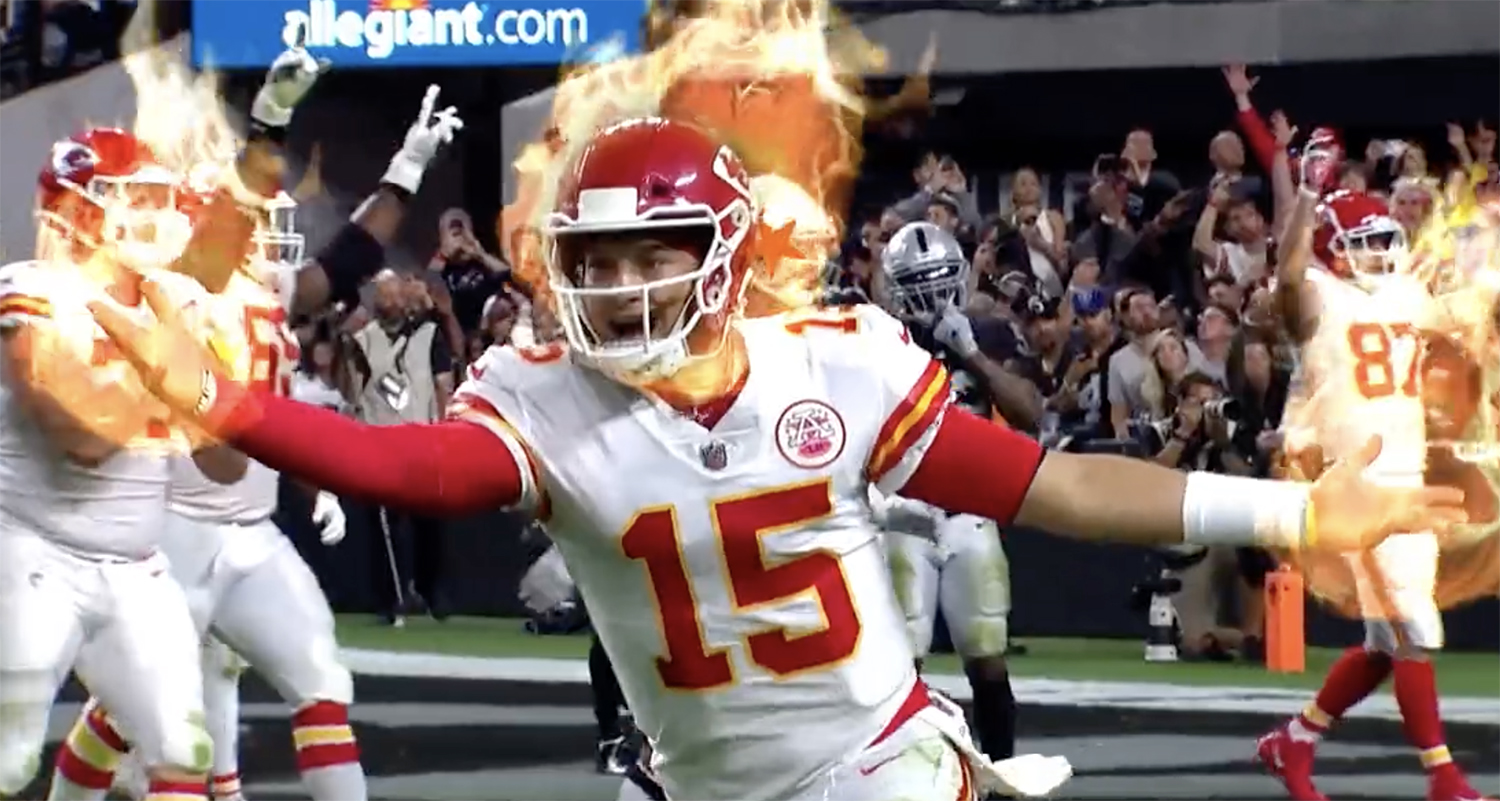 Nickelodeon and CBS Sports aim to have graphics integrated into the broadcast live and near-live more often than they did last year.

Viewers will also see a big upgrade to the popular Slime Zone graphics featuring four cannons in each corner of the end zone shooting out slime when a team scores.

“We had such a huge response to that last year that we felt like we needed  to make it even bigger and better,” says Hartman. “We’ve rebuilt and redesigned the cannons, and, since everything is running in Unreal Engine, a camera can actually zoom in on one of the slime cannons and see detail because the slime that’s coming out of it is a real-time liquid simulation. The cannons also respond to the lighting and time of day, so they’re going to look incredibly real.”

Slime Zone will also be used on field goals instead of solely on touchdowns. The SpongeBob SquarePants graphic between the goalposts on field-goal attempts will also be back, but it will more dynamic and react to the result of the kick in real time. Hartman also promises plenty of other eye-catching new slime graphics and characters will debut during Sunday’s game.

The Nickelodeon graphics team has partnered with Second Spectrum and the NFL Next Gen Stats player-tracking system to create slime trails that visually show receiver routes on the field. These elements can be turned around quickly enough to be shown on first replays within the broadcast. 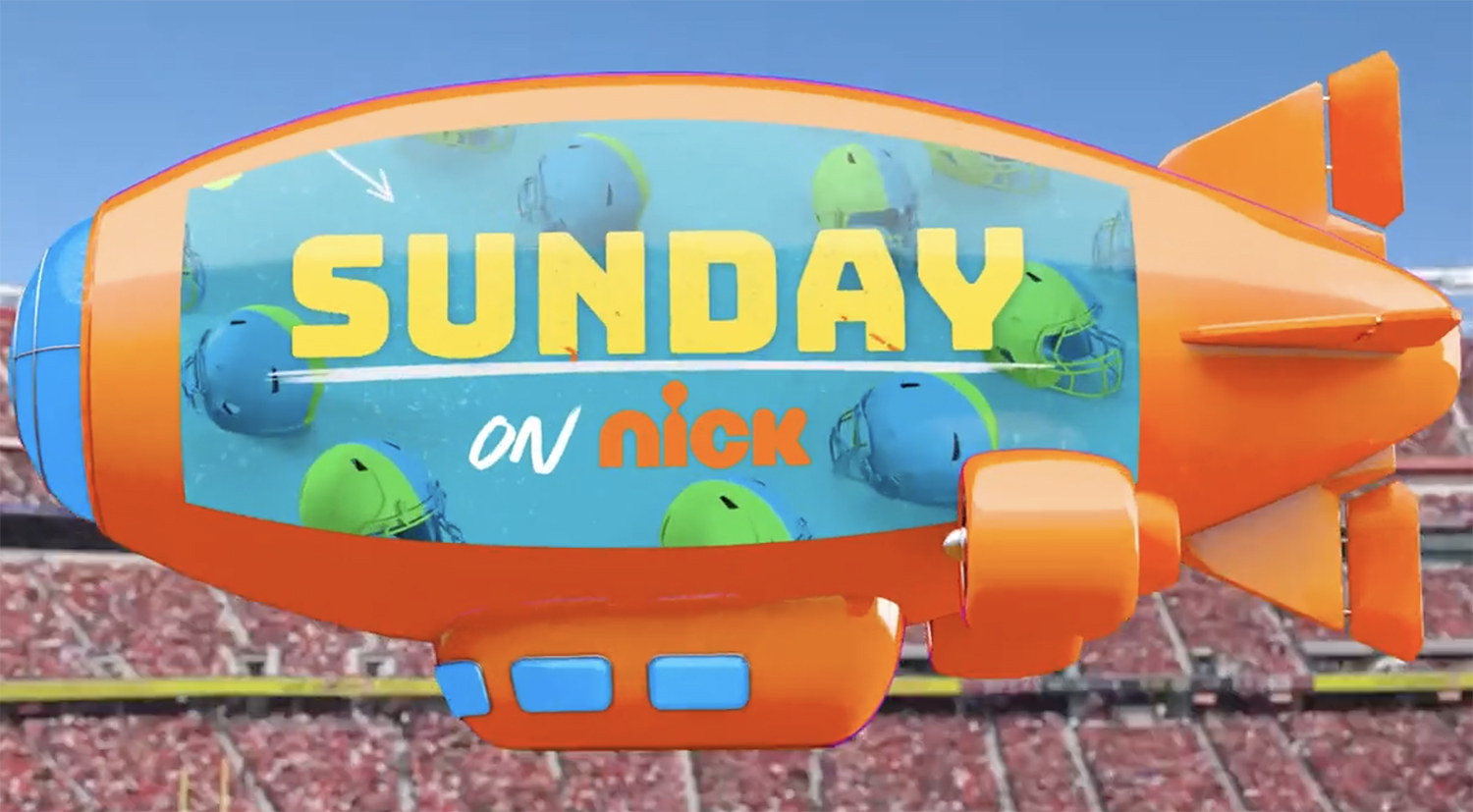 The blimp can open up its side and display video, such as replays, crowd shots, or graphics.

“We have some other things up our sleeve as far as telestration and slime trails on the field,” says Robbins. “Our main goal this year is to get those fun [elements] into the broadcast faster in first replays and in real time so there’s no waiting.”

Last year’s halftime show offered highlights featuring animated “Blockie” characters to mimic the exact formations and routes run by the players in the real highlights. Sunday’s broadcast will take a similar approach, but, instead of Blockies, the highlights will feature 3D-rigged models of Teenage Mutant Ninja Turtles. The Nickelodeon animation team partnered with Beyond Sports on the highlights, which will feature full 11-man squads of Ninja Turtles wearing 49ers and Cowboys uniforms. 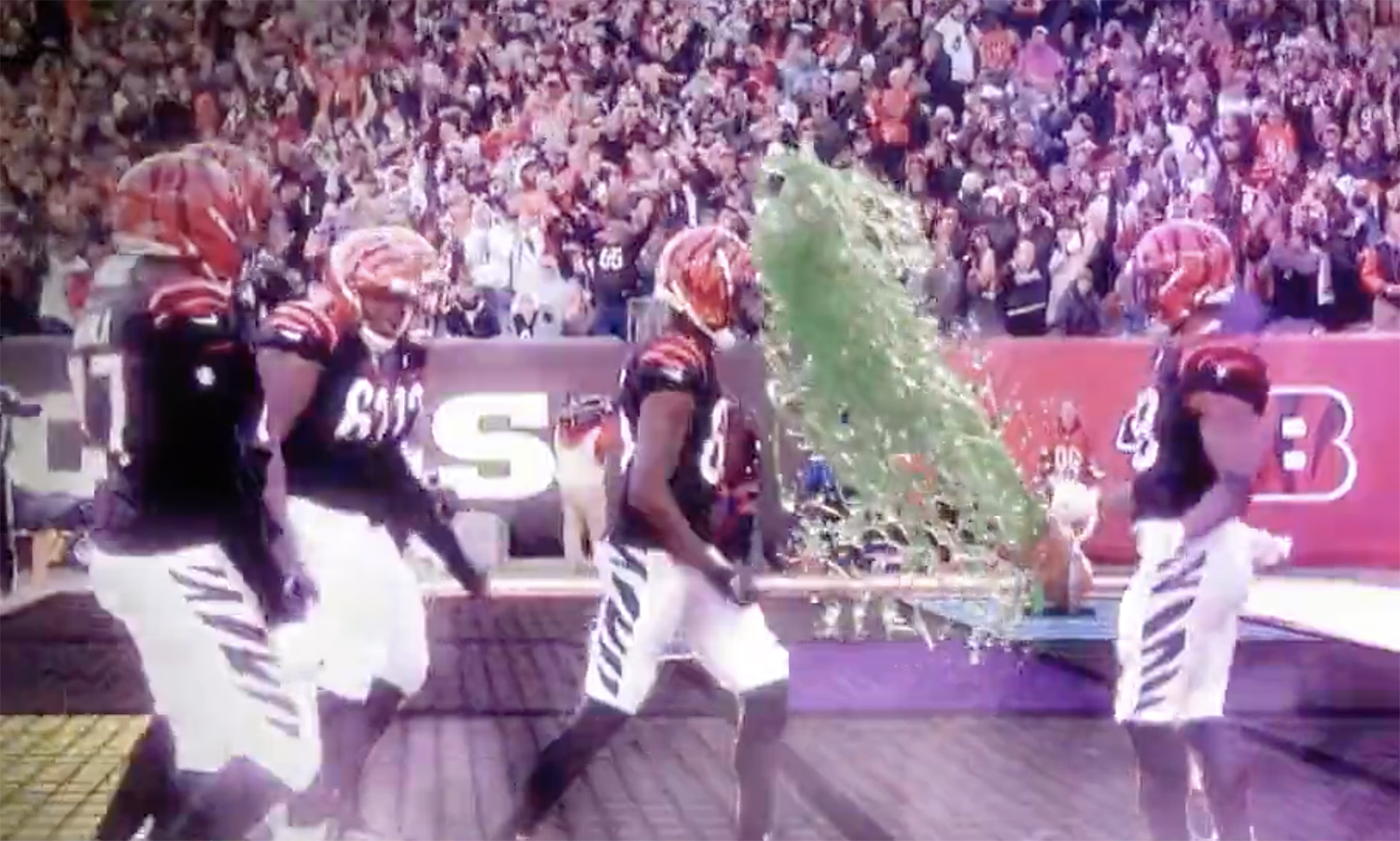 Nickelodeon’s Slime Zone will be back with enhanced slime cannons in all four corners of the end zones.

“The Blockies worked great last year for halftime highlights, so we’re excited to have [the TMNTs] in that spot this year,” says Robbins. “That’s a really fun environment that was created by the Nick animation team and the team at Beyond Sports. If there is a big pass from Dak Prescott to CeeDee Lamb for 80 yards, we’re going to be able to show that highlight to you as the Ninja Turtles reenacting to that play. And there’s definitely an opportunity for us to do things like that within the broadcast [in addition to halftime].”

In the Booth, in the Compound, and Back in New York 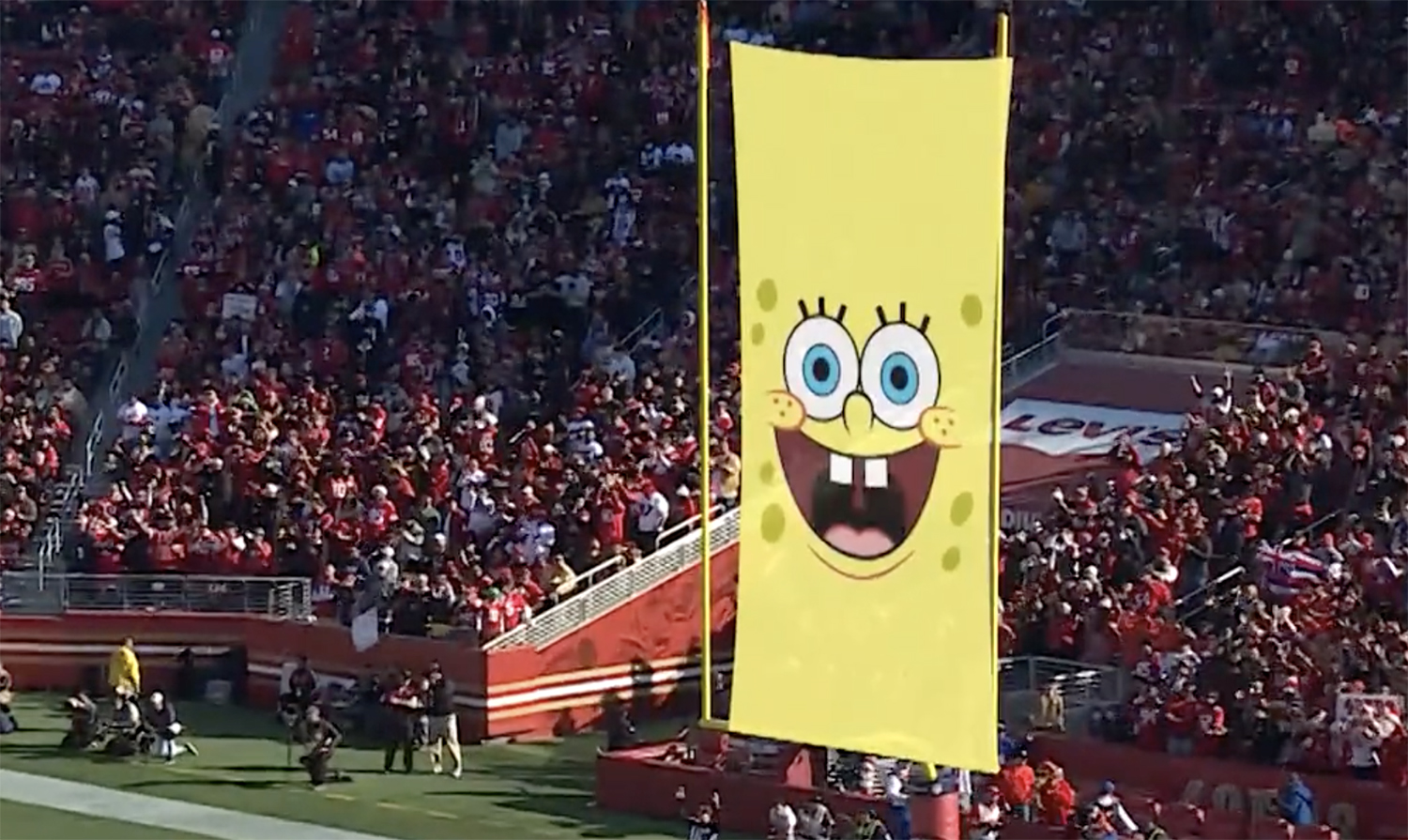 The SpongeBob SquarePants graphic, along with his pal Patrick, will be between the goalposts on field-goal attempts.

In the compound in Dallas, Robbins, producer Ken Mack, director Suzanne Smith, and the rest of the production team will be working out of Game Creek Video’s Columbia mobile unit. The Nick broadcast will have six dedicated cameras and access to all camera feeds from the main CBS broadcast. The Nick production team will also have several of its own EVS replay systems and access to replays from the main broadcast.

The Nickelodeon production team ran a full rehearsal with The Famous Group during the Falcons-49ers game on Dec. 19, tweaking the AR elements and ironing out details for the side-by-side production workflow required for Nick’s alternative broadcast. 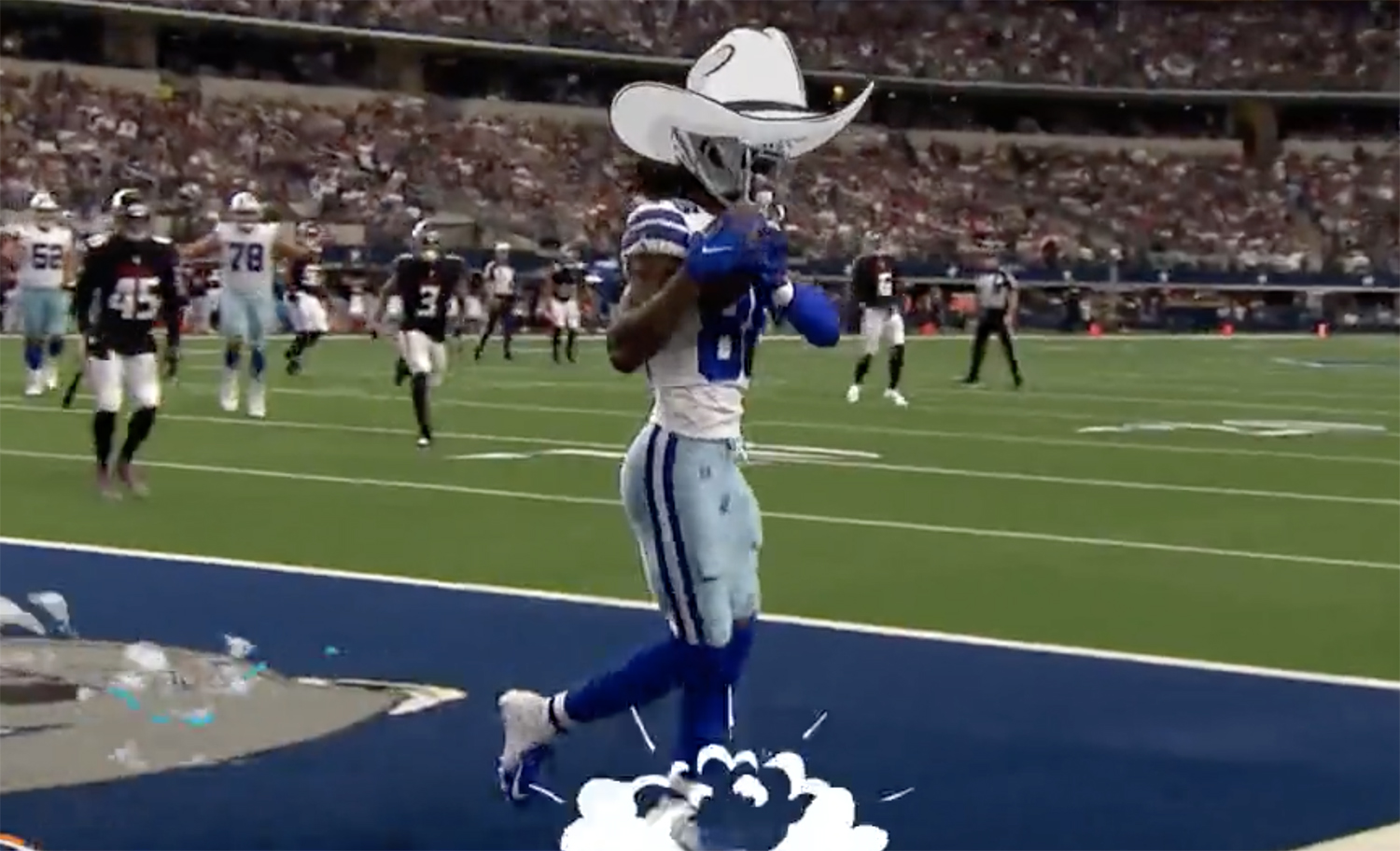 Some graphics elements can be turned around quickly enough to be shown on first replays within the broadcast this year.

“Suzanne and Ken have to weave in the resources we have around what the main game crew are putting on the screen,” notes Robbins. “Yet it looks like we’re in full control of the game. They have to pay attention to what [CBS Sports director and producer, respectively,] Mike Arnold and Jim Rikhoff are doing in another truck and trying to direct and producer their own game at the same time. And Ken and Suzanne were masterful at putting that all together.”

Nickelodeon will also bring back the same graphics pipeline workflow as last year, leveraging its team of animators in New York and working remotely from home. The graphics team also now has a full library of elements to draw from after producing 18 weeks of Nickelodeon’s weekly NFL Slimetime during the season. 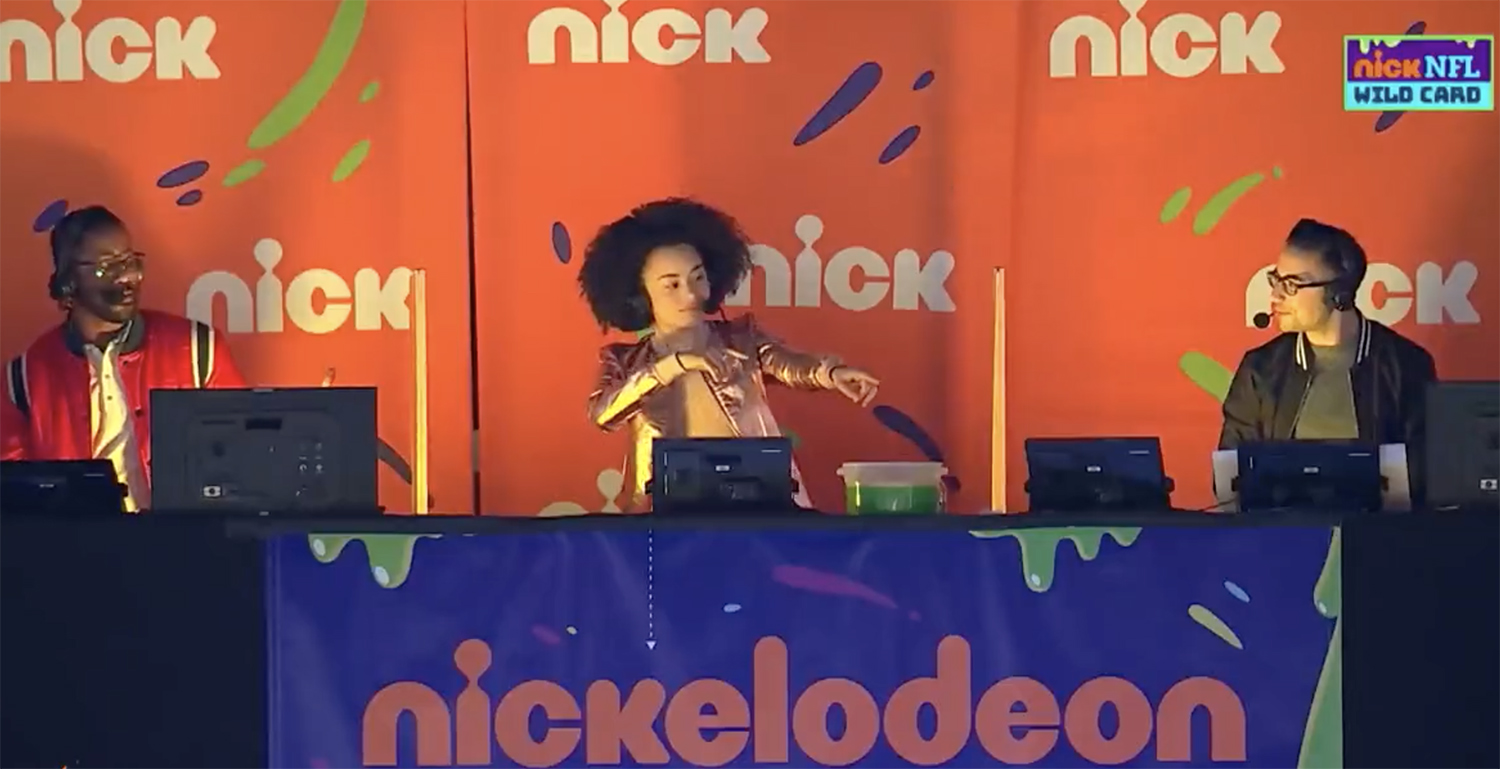 Noah Eagle, Nate Burleson, and Gabrielle Nevaeh Green will be back in the booth calling the game this year.

“At this point, we have 18 weeks’ worth of custom animations that we’ve done for the show, and we’re going to bring all of those things back to the game,” says Hartman. “We will use them for funny and silly moments in bumpers going into commercial breaks and coming out of different segments of the show. Even though we have a lot of new [workflows] for AR, we’re also doubling down on that workflow.”

Despite winning Sports Emmys for both Outstanding Playoff Coverage and Outstanding Live Graphic Design in its inaugural year, the CBS Sports and Nickelodeon teams aren’t resting on their laurels and are primed to up the ante in 2022.

“The goal is for this to be a true co-viewing experience,” says Robbins. “Keep the football pure and honest and then work in all this fun and magic around the game — I think we’ve done exactly that. I could not be prouder of everyone involved. This started as just a simple idea, and it blossomed from there. To see everybody run with that idea and go in the same direction with it has been amazing. It’s definitely one of the most rewarding projects I’ve ever been a part of.”

Stay tuned to sportsvideo.org for more of SVG’s NFL Playoffs 2022 coverage in the coming days.