Prime Video has unveiled the brand-new Thursday Night Football (TNF) logo, as the streaming service prepares to become the exclusive national rights holder for the NFL package this fall. 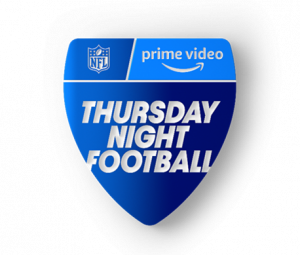 “We know what NFL games mean to fans, and just like the Rams and Bengals, we’re taking our game to the next level,” says Marie Donoghue, vice president of global sports video at Amazon. “With Prime Video as the exclusive home for TNF we have the ability to build a one-of-a-kind new experience for Prime members. It’s a huge opportunity and one our team is excited to take on as we get ready to kick off this fall.”

The Prime Video TNF logo was created in partnership with award-winning design studio Pentagram, and unites two iconic brands—Prime Video and the NFL. The logo was inspired by the tip of the arrow in the Amazon smile and the pointed shape of a football, giving Prime Video a modern, original brand identification that will be threaded throughout production next season. The typeface also carries special meaning as it captures the natural movement and agility of football, and represents Prime Video’s intent to break boundaries and redefine the next generation of football fans.

“We are thrilled to kick off our TNF marketing campaign with this logo unveil,” says Ukonwa Ojo, global CMO of Prime Video and Amazon Studios. “In designing something that both unites our brands and embodies the excitement that only the NFL can deliver, we thought it fitting to capitalize on the buzz surrounding Super Bowl LVI as the first beat of our brand campaign. We look forward to sharing the next chapter with fans during Sunday’s game.”

When TNF returns later this year, Prime Video will become the first streaming service to air a season-long exclusive national broadcast package from the NFL. The 11-year deal includes 15 regular-season games and one preseason game per year, with Prime Video also delivering new pregame, halftime, and postgame shows as well as fan-favorite interactive features like X-Ray and Next Gen Stats powered by AWS. Prime Video and the NFL will continue to collaborate on exclusive NFL content and enhanced fan-viewing experiences around Thursday Night Football, with more information to follow in the coming months.