At only three years old, the Twitch Rivals Streamer Bowl is the avatar of the evolution of live-esports production during the pandemic. After the inaugural event in February 2020 was produced live onsite in Miami, the 2021 edition — at the height of the early 2021 COVID surge — was a fully remote event featuring an extended-reality (XR) stage. Tomorrow night, Streamer Bowl III will be back with competitors onsite in Los Angeles, and Twitch has taken the live Fortnite broadcast to a whole new level. 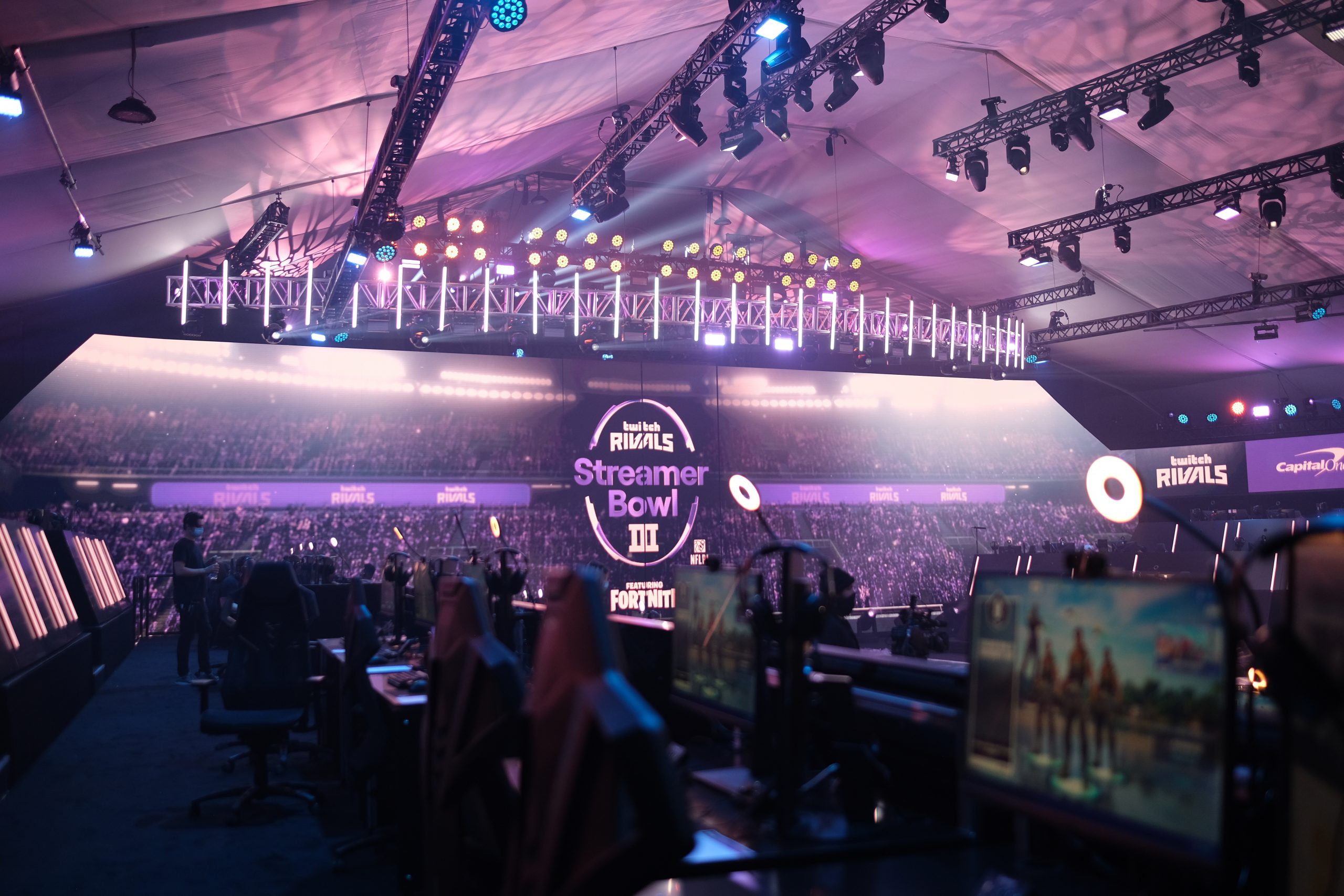 “Streamer Bowl III is a one-of-a-kind event that can happen only on Twitch,” says Steven Flisler, VP, original content/executive producer, Twitch Rivals. “The event will be broadcast on 65 different streams, and we’ve integrated cutting-edge technology for graphics, interactivity, and mobile IRL streaming to create a unique and well-rounded narrative.”

In Streamer Bowl III, Twitch Creators, NFL Stars, and Twitch Community Champions will compete in a head-to-head, elimination-style Fortnite tournament, vying for a share of a $1 million charity prize pool. The livestream begins on Twitch Rivals tomorrow at 5:30 p.m. ET.

At LA Live: Lessons Learned From Years 1 and 2

The first-ever Streaming Bowl in 2020 in Miami featured 32 players (16 duos) and proved to be a hit — both for fans viewing at home and for the Twitch creator community. However, as the pandemic was peaking in February 2021, Twitch opted for a fully remote production of Streamer Bowl II centered on an XR stage featuring 90 players (30 trios). 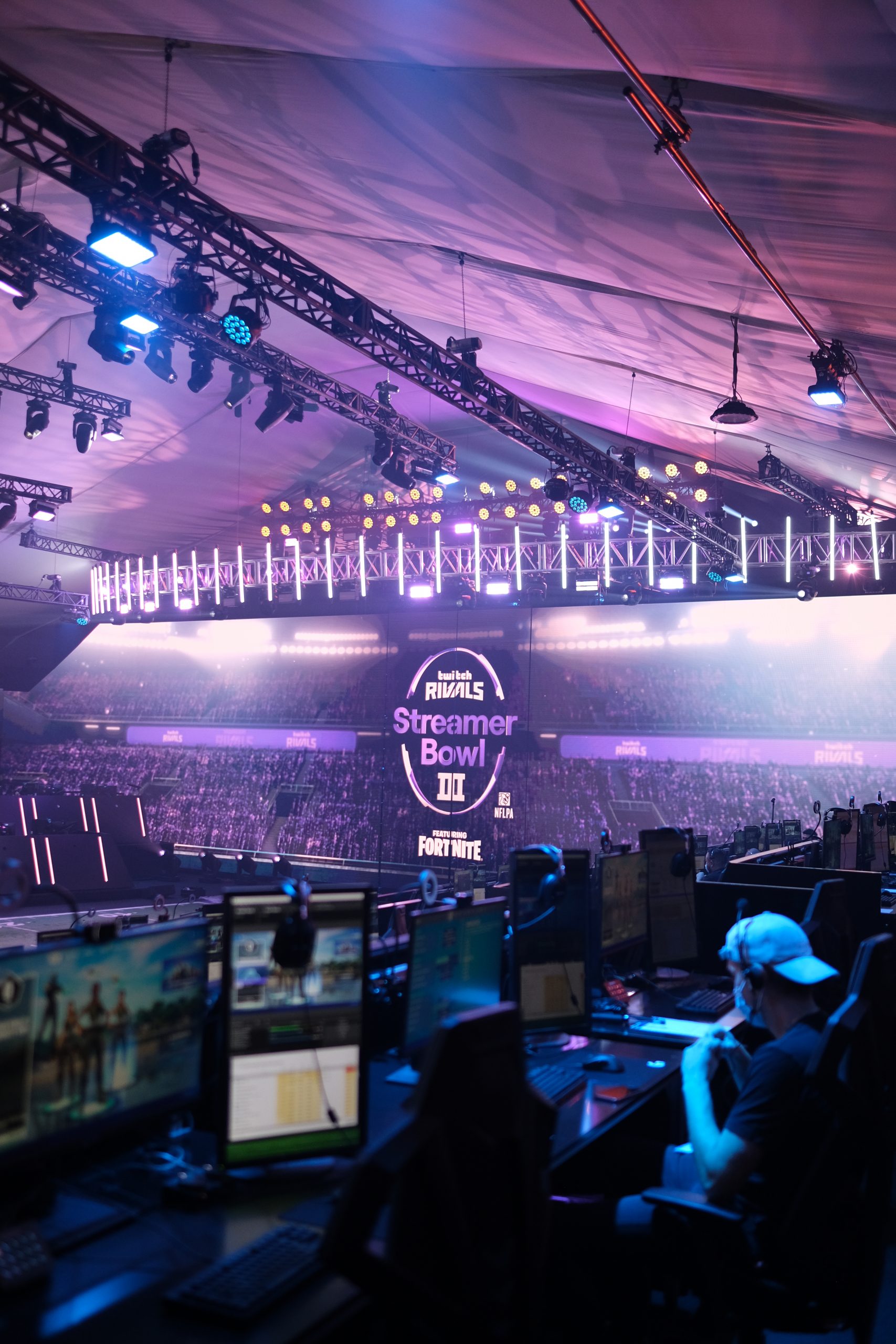 Now, in 2022, Streamer Bowl III will feature 60 players (20 trios) in a one-of-a-kind arena at LA Live in downtown Los Angeles, with 30 player seats on each side of a custom Twitch field, seating for 1,000 (although plans for a live audience were canceled for safety), and massive interactive LED display.

“It’s exciting that we’re talking about Season 3 of Streamer Bowl,” says Flisler. “Miami feels like a long time ago; our team was still being built, and most of our partners came together for the first time. In Season 2, we had to rewrite our playbook due to COVID, like the rest of the world, and navigate how to put on a high-quality show with our participants playing from home. We used XR technology to bring the event to life and used a lot of cloud infrastructure to keep our creators, crew, and on-air talent safe. For Season 3, we have a beautiful set with all 60 participants onsite to compete. The pandemic overall has taught us how to be flexible and build in a modular approach to production.”

The Twitch production team is using NEP EN2 mobile unit and has rolled a robust EVS replay/playback setup in order to capture all the action and tell the story of the 60 players competing this year. Onsite crew members are located at the Live Event Deck adjacent to the Crypto.com Arena. Given the large scale of the show, Twitch has upwards of 200 crew members onsite, their expertise ranging from esports to professional sports and traditional broadcast.

Twitch has once again partnered with Concom to manage production logistics and facilities, and Esports Engine (which also produces all the online Twitch Rivals events throughout the year) is handling broadcast production and esports-tournament operations. NEP is providing all broadcast facilities; its CT (Creative Technology), the massive in-venue LED wall.

“Activating an event in a Super Bowl host city also presents challenges as we look at resources, logistics, bandwidth, and overall execution,” says Flisler. “From furniture inventories to camera ops, we are challenged to over-preproduce as much and as early as possible to ensure we build the best infrastructure possible.”

Although COVID numbers and restrictions have been easing in recent days, the Twitch Rivals team has continued to be mindful of the pandemic throughout the planning of the event. Twitch has partnered with Carbon Health to implement production protocols and a comprehensive health and safety plan to protect the crew, talent, and creators for the duration of the event.

“Live event production in a COVID environment is always challenging,” notes Flisler, “and Streamer Bowl III has been no exception. COVID testing and protocols are extremely important as we had in Las Vegas for our event in 2021, where we are proud to say we had zero cases. Health and safety are of the utmost importance, and we take that very seriously. We always say within our team ‘right tool for the right job,‘ and this show is no different.”

Flisler and company also have taken lessons learned from the Twitch Rivals: Ultimate Challenge event in Las Vegas last November and extended each streamer’s desktop PC and webcam setup with a Samsung mobile phone to serve as an IRL (in-real-life) camera. This setup allows streamers to quickly switch camera input from their webcam to a mobile phone, and then they can take it on a selfie stick around the venue to interview their competitors or to carry out of the tunnel for their big walkout.

“With being back IRL and our learnings from Las Vegas in November 2021,” notes Flisler, “we have implemented a new way for our creators to stream through mobile technology. Onsite, our competitors have the chance to bring their audience right into the Streamer Bowl experience.”

Every team will have a Samsung phone feeding IP (NDIHX video) direct to their streams. When they choose, they can switch to this view and share behind-the-scenes action using their Samsung phones and OBS to give real-time updates, candids, and interactions with their fellow streamers across the arena.

In the event that a participant cannot attend IRL, Twitch has a contingency plan: a number of hotel-room setups are fully equipped for live broadcast with a gaming PC, webcam, and all the same peripherals used by competitors at the venue. A proprietary hardware solution enables Twitch to bring these streams right into the main production.

In addition, Twitch has added a whole new layer of graphics integration into live gameplay, including player indicators denoting when teams are eliminated, Twitch chat-controlled cheering that triggers in-venue LED graphics, and a custom graphics package for each streamer at their desktop controlled by a customized Stream Deck.

This year, Twitch has also enhanced its motion-graphics package (run through Ross Xpression), in partnership with Dreamwires, to fully immerse both viewers and participants for Streamer Bowl III. Streamers are set up to play on modular and reusable streamer desks created exclusively for the Twitch Rivals program by Netherlands-based Sightlines Productions and offering streaming-specific detailing and an infinite number of setup possibilities (Flisler calls it “Legos for live esports events”). This provides Twitch the flexibility to serve the various needs of the Twitch Creators, NFL Stars, and Twitch Community Champions competing at the event.

“Streamer Bowl III is a merging of three very unique worlds into an entertaining and culturally significant moment on Twitch, presenting a host of unique challenges for our team,” he says. “Twitch Creators, NFL Stars, and our Community Champions come from different worlds, with different expectations and experiences that we balance into a meaningful moment for each group/person uniquely. Telling this story and weaving together the drama from these three very different, types of competitors is one of the hardest but most rewarding parts of Streamer Bowl.”

Streamer Bowl III will have 65 streams broadcast for viewers to watch and participate in via chat and interactive features: 60 player streams, three IRL co-streamers, and two hub channels on twitch.tv/twitchrivals and /twitchrivalsscores. These streams are produced with 80 total video feeds, including 60 Twitch streamer feeds (their actual stream complete with webcam or mobile-phone cam, graphics, and gameplay), three Twitch co-streamer feeds, seven game observer feeds of Fortnite, and 10 total studio cameras across the arena. Each streamer broadcasts to their personal Twitch channel, talking to their chat, and adding their own graphics/alerts.

“Not only do we need to weave together an exciting story in a central production,” says Flisler, “but we actively provide tools and technologies for every stream to establish a unique experience. We’ve built a suite of custom tools that allow us to build the Twitch technical infrastructure with the control room. This in turn enables us to manage all 60 streamer feeds and synchronize them so all gameplay is consistent from stream to stream — meaning that, when Player 1 shoots at Player 2 and then we switch from Player 1 POV to Player 2, it looks like a continuous shot. And these tools allow us to name teams so we can switch team-to-team views.”

This workflow enables the director and game directors to manage a massive number of video perspectives: cameras in the arena showing players’ physical reactions, 20 trios of streamer perspectives, Fortnite in-game cameras to give bird’s-eye views inside the Fortnite map.

“Esports is so much fun — and daunting, sometimes — to produce,” says Flisler. “When you add in live Twitch streamer perspectives from their actual streams, it’s a whole new layer of fun — and, of course, complexity — but this is what makes Twitch Rivals a one-of-a-kind competitive entertainment program built to highlight Twitch creators.”

Looking Back: Three Years of the Streaming Bowl

With the third-annual Streaming Bowl set to kick off tomorrow, Flisler takes a moment to reflect on all his team has accomplished since dreaming up the concept of the Streamer Bowl with Epic Games at TwitchCon 2019.

“To see the program grow into its third year in the face of massive COVID challenges is absolutely amazing,” he says. “We have one of the most uniquely talented teams in all of media and esports focused on a core mission to be creator first and build something absolutely spectacular for the Twitch community.

“I couldn’t be prouder of our team’s dedication to executing this amazing event and tirelessly working to ensure we stay on track no matter what obstacle comes our way,” he continues. “This is an incredible moment for all of Twitch and anyone that loves streaming, football, or Fortnite, and I can’t wait to see everyone jump in chat and participate in this amazing event.”