Riedel will have a big presence for the biggest game of the year. Its Artist intercom with Bolero wireless will be used by SoFi Stadium, Van Wagner, NFL Network, the Halftime Show, and, perhaps most important, the referees and officials on the field. 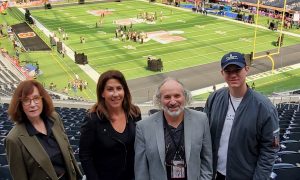 More than 140 Bolero beltpacks will be deployed. For example, the NFL official-to-official network, will use 14 Bolero wireless systems; the stadium will have an additional 22; the Halftime Show will have 46 on the field. Van Wagner will use up to 22 for the in-venue presentation, and, outside the bowl, the NFL Network will use another 40.

Historically, the Super Bowl has required a massive lift to manage wireless frequencies, including intercoms, wireless cameras, security systems, and much more. Rick Seegull, VP, system consulting, Riedel, says that license-free digital enhanced cordless telecommunications (DECT) allow up to 50 Bolero beltpacks to be used in a single overlapping space due to time-slot allocation. Riedel uses DECT differently from other companies by deploying its Advanced DECT Receiver (ADR) algorithm. The technology is key to the company’s success at big events like the Super Bowl and Olympics (The Grammys also uses up to 150 units at once).

“The hardest thing when you’re operating in the gigahertz range with RF are multi-path reflections,” Seegull explains, “and the ADR can distinguish the proper path back to the antenna as opposed to destructive reflections. The ADR assures the strongest connection between the beltpack and antenna, and, with antenna diversity in the beltpack, this guarantees the connection will remain.” 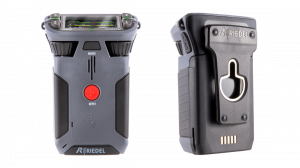 More than 140 Riedel Bolero belt packs will be in use on Super Bowl Sunday.

To ensure proper intercom operation, separate antenna systems inside the bowl will be deployed so that the officials, the Halftime Show, and in-venue and stadium operations can operate without interfering with each other. Seegull says the “dance” at the Super Bowl is meeting the NFL mandate to ensure that no more than 48 units are operating in the bowl at one time. By keeping congestion down, Riedel prioritizes the NFL officials’ communication, which ultimately is most important.

“The NFL has 14 units, seven for officials and seven live backups,” he explains. “The Halftime Show must keep the balance of their units off until the two-minute warning, when they can fire up Bolero packs for key positions. Then they can fire up the rest when the officials leave the field, and, during halftime, approximately 70 belt packs will be in use.”

Riedel’s Radio Scanner Application will be used by Dan Bakies, a Riedel representative onsite for the big game. He will use it to keep track of what belt packs are on a given frequency and how many slots are open for belt packs.

“It can scan all the time slots and show what Bolero packs are occupying them as well as non-Riedel devices, clearly showing how many are free in a given space,” says Bakies. “This will be in use to monitor all Riedel packs and other DECT devices that might be in use during the Super Bowl.”

Seegull says a crystal-clear benefit of Bolero is the efficient codec that provides the most intelligible signal even in the noisiest of environments.

“In addition,” he says, “the ‘out-of-range’ alert lets users know if they have moved out of range of an antenna, which is hard to tell as Bolero has such a wide range. The system alerts when they are back ‘in-range,’ preventing missed communications.”