When it comes to major events like the Super Bowl Canon is on hand supporting not only the broadcasters but also still the photographers. The pandemic caused a lot of those in-person services to be scaled back but it appears that they are finally returning.

“We’re here supporting NBC’s broadcast efforts along with the Van Wagner scoreboard show and the ESPN studio,” says Josh Stoner, Canon USA, senior specialist, product. “We have three people here doing technical service and then we also have our two technicians in Beijing supporting NBC again at the Olympics at the same time. So, we’re spread around the world to support one of our biggest customers.”

The NBC broadcast will feature all Canon lenses, including a couple of the brand new UHD-DIGISUPER 122x lenses, a couple of 111x lenses, and then CJ15ex4.3B on Steadicams. Van Wagner is also getting 111x lenses for some key camera positions.

“They are also using one of our C300 cameras on a movie rig for the shallow depth of field shots,” says Stoner. “We are seeing more requests for those type of cameras from broadcasters along with our Cine servo line of lenses. A lot of those will be used for the halftime production.” 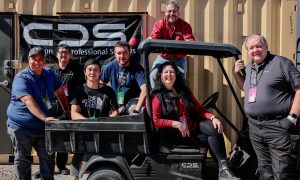 Thousands of miles away is the Beijing Olympics support team which includes a person at the Mountain IBC and another person at the main IBC.

“We also have a couple of Chinese technicians who are roving and helping us out,” says Stoner.

Canon also staff on site in support of the digital still photographers who play such a bit part at Super Bowls and major sporting events. But for Stoner, Luis Ramos, and Toby Kondo the focus is on supporting broadcasters.

“Our partnership with NEP is very strong right now,” says Stoner. “We’re supplying them with a lot of new technologies and new equipment for things coming up. And our relationship with NBC is also very strong with the Olympics, support here, and then moving forward we’re talking about other things.”