TSN is expanding TSN 5G View for TSN’s regional coverage of Winnipeg Jets home games. Fans in the designated Winnipeg Jets broadcast region can experience the game like never before by controlling the angle on every play, starting with TSN’s coverage of the Jets’ matchup against the Montreal Canadiens tonight (Tuesday, March 1) at 7 p.m. CT on TSN3.

Powered by the Bell 5G network, Jets fans with a TSN subscription and a Bell 5G device can use the innovative TSN 5G View technology to get up close to every shot, assist, save, and hit with zoom, pause, rewind, and slow motion, as well as nearly 360° replay capabilities. With the fastest-ranked 5G network speeds in the country and ultra-low latency, Bell 5G helps TSN and RDS connect a fan’s smartphone to the in-game cameras with lightning-fast response.

“We’re thrilled to bring the TSN 5G View experience to fans in Winnipeg and across Manitoba,” says Nauby Jacob, Bell Media’s Senior Vice President, Product Platforms. “With TSN 5G View, Jets fans can truly experience a ‘Winnipeg White Out’ from rink level in addition to watching any goal, save, or hit from any angle, directly from their 5G mobile device.” 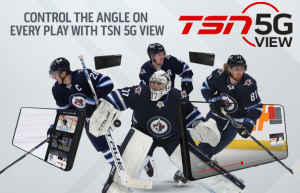 “TSN 5G View will provide the ultimate immersive experience for Winnipeg Jets fans by allowing them to experience plays from every angle,” says Christina Litz, True North Sports + Entertainment’s Chief Brand & Commercial Officer. “Fans will literally have every play in the palm of their hands no matter where they are watching the game.”

Eighty time-slice cameras have been installed around the bowl of the arena at Winnipeg’s Canada Life Centre, along with fibre connectivity, dedicated servers, and a specialized control centre to bring the technology to life on the Bell 5G network.

In addition to the immersive mobile experience, TSN is leveraging the new 5G capabilities for viewers of Winnipeg Jets home game broadcasts on TSN, available in the team’s designated broadcast region, which includes Manitoba, Saskatchewan, Nunavut, the Northwest Territories, and parts of Northwestern Ontario including Kenora, Dryden, and Thunder Bay. Now all fans can be closer to the action with views from never-before-seen camera angles during in-game commentary, analysis, replays, and post-game recaps.