The coverage will be a mix of REMI and onsite workflows

With more eyeballs on the NCAA Women’s Basketball Tournament than ever, ESPN is putting plenty of production firepower behind its coverage this year. And, for the first time in two years, the broadcaster will have a sizable onsite presence in the various compounds throughout the tournament. ESPN will deploy a mix of full onsite truck and REMI productions throughout the first and second rounds, before moving to full truck productions at each site beginning with Regionals.

“We are so excited to be back in March Madness mode and with a sense of normalcy after all the challenges that COVID threw at us,” says Catherine Carroon, associate manager, remote operations, ESPN. “The women’s tournament has become the culmination of our season. The tournament has become this team’s ‘why’ throughout the season, our driving force behind why we work so hard.”

For the first time, each site will have ref mics, which enable the viewer at home to hear the referees ruling on calls. In addition, ESPN has collaborated with G3DVU for training and deployment of virtual court logos for each site.

Every year, ESPN’s operations team faces a tight timeline for executing plans for the tourney. This year’s timeline was condensed even further by the addition of the First Four games to the tournament. As a result, ESPN received a schedule with host sites late Sunday night and had to send two crews out first thing Monday morning. 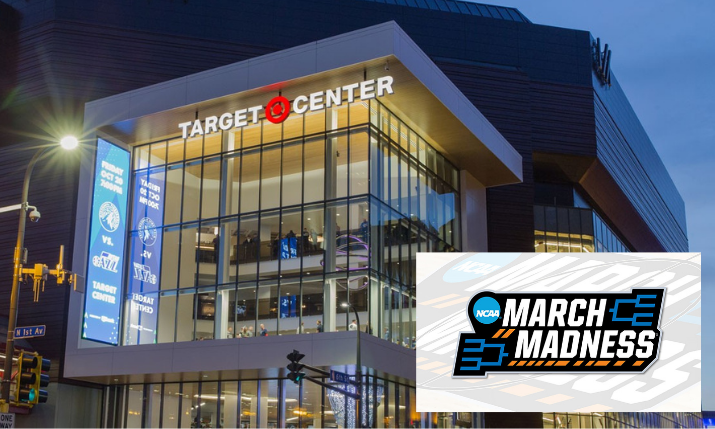 Unlike in the men’s tournament, the highest seeds host the first and second rounds in the Women’s Tournament, creating another logistical challenge for the ops team.

“Our team spends weeks studying brackets and contingently putting resources in place so that, come Selection Sunday, we are prepared and ready to execute plans,” says Carroon. “It is a special sight to see all the various sectors of our team — crewing, mobile units, remote traffic — come together on Sunday night to implement plans.”

Mixing It Up: Early Rounds Feature Both REMI and Onsite Workflows

For the opening two rounds, ESPN will deploy two control rooms at its Bristol, CT, campus for REMI productions. Two REMI productions originating from its Charlotte, NC, facility will be produced from a single control room but handled by separate crews. In addition, ESPN’s Final Four Megacast will be a “REMI-Pro” operation originating from Bristol.

In terms of cameras, ESPN’s coverage of the opening rounds will feature three hard cameras (game, tight, slash), two handhelds under each basket, and Marshall POVs. Once Regionals begin, that will grow to four hard cameras (game, tight, and two slashes), two handhelds, and Marshall POV cameras. One of the regional sites will serve as a Final Four crew rehearsal and will be equipped with an additional EVS and second Vizrt graphics machine to support the added enhancements with Second Spectrum.

ESPN’s production will be bigger than ever, come the Final Four in April. This year — between game, studio, and Megacast presentations (for which plans are being finalized) — ESPN will deploy more than 45 cameras, including a Sony HDC-F5500, Steadicam, Supracam aerial system, Fletcher RailCam, and various Fletcher robos. After a year away, ESPN welcomes the studio show back to site and will also provide coverage of the pregame red-carpet arrivals.

ESPN is partnering with Genius Sports’ Second Spectrum to add data-powered graphics to alternative live broadcasts of the Final Four and National Championship games, marking the first time that live augmented video feeds will be distributed for coverage of women’s basketball. ESPN will produce an alternative live broadcast that will display the enhanced data for each Final Four game and the National Championship.

“We are passionate about continuing to work alongside our production partners to grow this event,” says Carroon. “And we are excited to watch a team cut down the nets in Minneapolis on April 4.”

Stay tuned for SVG’s onsite coverage of the NCAA Women’s Final Four from Target Center in Minneapolis next month.