For small to midsize professional sports leagues in the U.S., it’s no longer a competitive advantage to have all your games broadcast or streamed live; it’s a necessity. 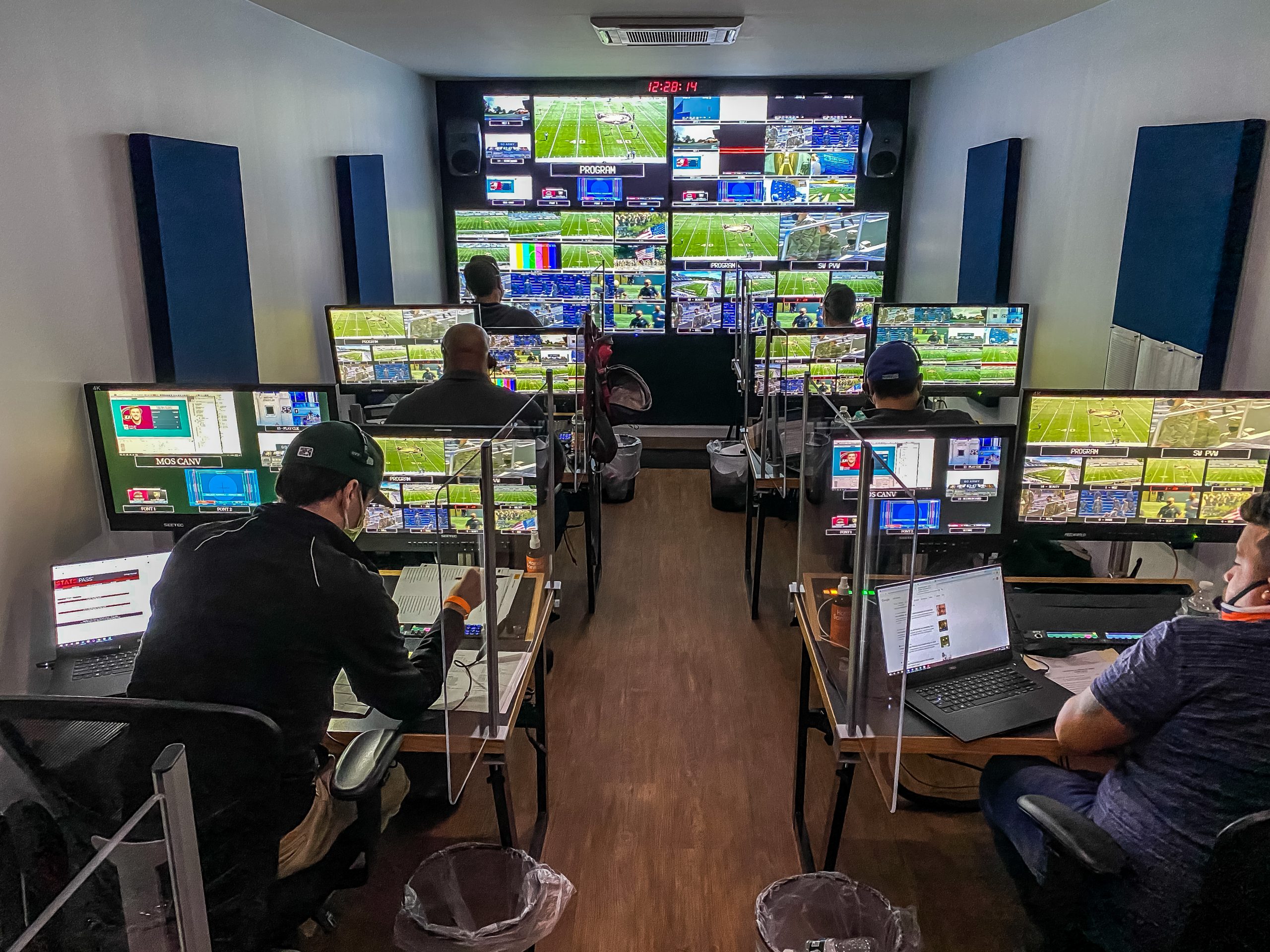 The National Lacrosse League has establish a REMI-based production workflow to produce all of its games for distribution across ESPN+ in the United States. The games are produced largely by crews in centralized production facilities. Freedom Broadcast Group (pictured) in Clifton Park, New Jersey is one of those facilities.

That’s what makes this season one of the most important in the history of the National Lacrosse League (NLL), a professional men’s box-lacrosse league that launched in 1987. Up to 139 games — regular-season and playoff — are produced and distributed via a centralized-production model established by the league to meet the demands of a new live-rights agreement under which all games stream on ESPN+ in the U.S. and the TSN app in Canada.

“To be able to execute on these breakthrough deals,” says Joel Feld, EVP, broadcast and content, NLL, “we had to create a production model that could effectively and efficiently distribute those games. It’s a very extensive and complex offering that we are producing and distributing.”

Feld — a veteran of sports production with a long list of successes at ABC Sports, CSTV (now CBS Sports Network), NESN, and ONE World Sports — joined the league in 2018 and, over the past year, has helped spearhead a league-operated live REMI production model for the league’s entire schedule of games.

For a REMI production in the U.S., a minimal crew — camera operators, a couple of techs, on-air talent — captures the images and sound in the arena and pushes feeds to a control room at one of the production facilities, which house the producer, director, TD, graphics and replay ops, A1, and other members of the crew.

“Budgets no longer support spending $50,000-$75,000 on producing, say, a mid-tier college basketball game,” said Ed Derse, broadcast-operations and -technology advisor to the NLL, in an interview with Sports Business Journal last month. “How do we produce at a high level at costs that merit the economics of the situation? That’s really the problem that we’ve been trying to solve from Day 1.”

In addition, the cloud-based IP workflow, featuring a transmission-backend infrastructure from BitFire Networks, supports live linear games (of which there are 35 between ESPN and TSN), efficient delivery of video between production facilities and teams, local broadcast partners (approximately 70% of the NLL’s live game productions are picked up by a team’s in-market broadcast partner), and other key media endpoints.

Resetting the Bar for a New Generation of NLL

The task was an ambitious one: the NLL wanted not only to make all its games available via a single distribution partner but also to streamline and elevate the quality of each live game production. 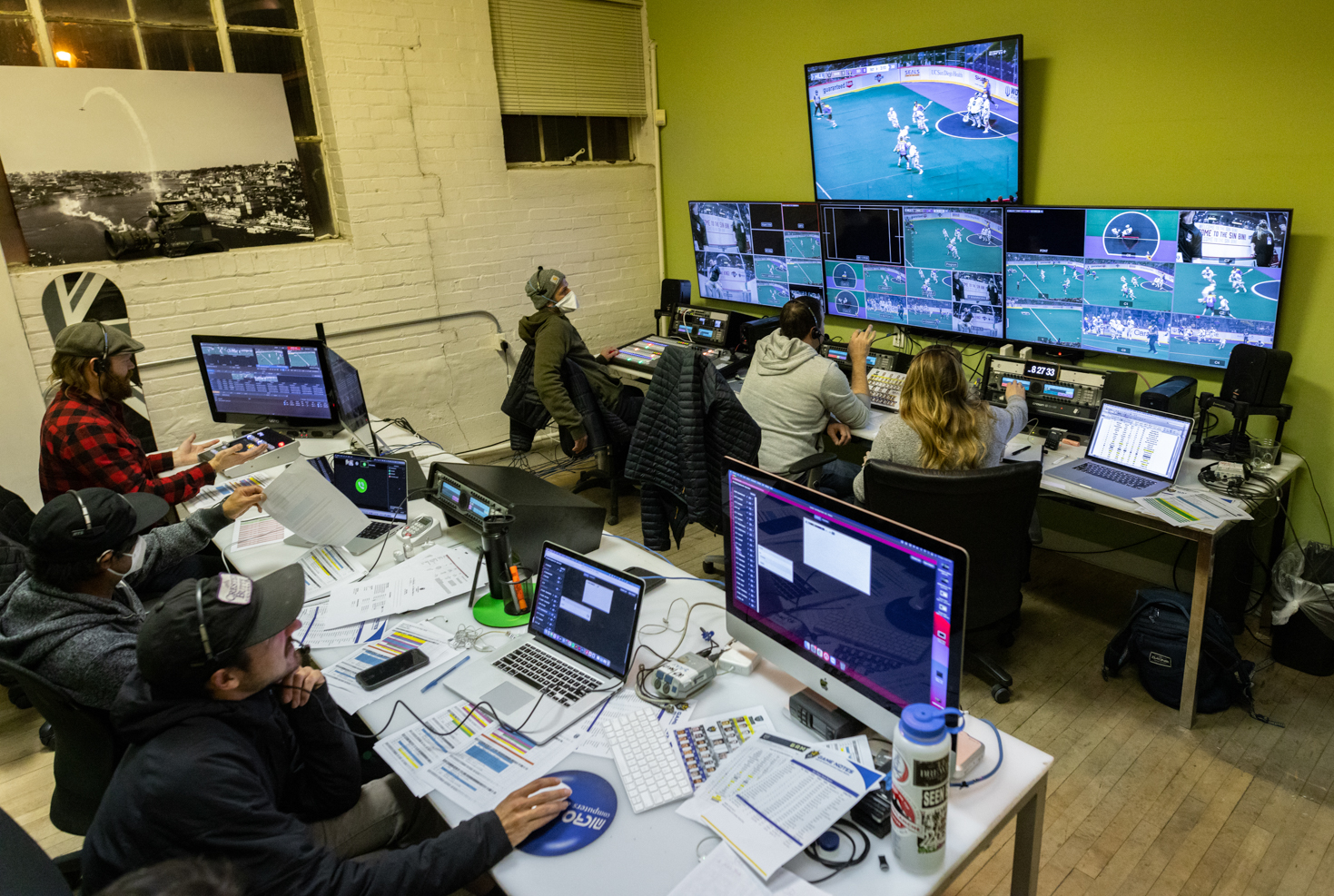 Under the league’s previous deal — which, in the U.S., delivered matches to Turner Sports’ B/R Live app — the individual teams were responsible for production of their home matches. Some of the league’s 14 franchises invested in live streaming; some pushed essentially a simulcast feed of the in-venue videoboard show. That inconsistency across the league wasn’t going to fly given a new generation of the NLL’s rights, according to Feld and Derse. The pair quickly began vetting a centralized production to standardize the look of games across the board but set a a higher standard of production quality.

“Fans are becoming more demanding of a quality product that matches what they see when they watch games on television,” says Feld. “We believe we have achieved that.”

A typical NLL game production deploys four manned cameras, with the crew also having access to feeds of any preset cameras used for the in-venue show (the camera on the centerhung videoboard, for example).

Those feeds are pushed to the control rooms at either Freedom Broadcast, Dragonfli, or Dome where the final program feed is assembled.

“We set out to produce these games cost-effectively and efficiently in terms of workflow and staffing,” says Derse. “The NLL is a smaller league that doesn’t have a huge broadcast apparatus to pull this off. We wanted to move beyond the way games were produced in the past.”

Other key tech for the show includes Flowics, a cloud-based graphics platform. Its architecture can take live scoreboard data and live statistical data off APIs from Sportzcast devices set up in the arenas to feed the broadcast-graphics package and power the scorebug and from the NLL’s stats data provider, HockeyTech.

On any given weekend, this workflow serves live production of six or seven games, many of them occurring simultaneously.

“The sheer volume of games is the part we’re the most proud of,” says Feld. “To be able to simultaneously deliver that makes this an even more complex and exciting challenge to [overcome].”

The transmission side of the production plan is the key, with a fully managed IP video-transport network serving as both the backbone and the nervous system of the league’s entire broadcast experience.

According to BitFire Networks VP, Business Development, Ben Grafchik, BitFire servers at each of the league’s venues enable the vendor to provide backhaul and final delivery for the league’s remote/distributed production. The company’s FireBridge solution is essential in aggregating and delivering all feeds, along with comms, between the venue and production facility.

Feld describes the internal transmission as “the overlooked superhero of these efforts.”

“One of the overlooked pieces of centralized league-managed productions is the technology side and being able to deliver a quality, latency-free product to fans,” he explains. “BitFire has allowed us the opportunity to deliver what we think, without boasting, is a production that we’d put up against anyone’s in the space.”

On a typical game day, BitFire backhauls as many as nine feeds per game to either Freedom Broadcast or Dragonfli, enabling a multi-camera production from control rooms at the production facility. In addition, the program feed is returned to the venue for announcers in the building to see. All comms are handled through BitFire’s own proprietary interface, which uses AES67 (audio over IP) multicast to handle between eight and 12 channels of comms between the game venue and the production facility.

In terms of moving the signals out externally, BitFire sends the program feed to Encompass Digital Media’s facility in Atlanta, which passes the finished product to ESPN for streaming to ESPN+. For Canadian games, the program feed is pushed directly to Dome Productions for distribution on TSN. Additional RTMP pushes are handled by BitFire paths that send content to partners like Grabyo (for social-media highlight clipping) and Genius Sports (for graphic augmentation and data delivery to the league’s official sportsbook partner, BetMGM).

“It’s not just delivery technology,” adds Derse. “It’s the back and forth and the ability for us to move all of the signal around with great agility from any particular venue to any particular taker. We can deliver it quite easily and in a way that, frankly, would be much more difficult, if not impossible, without [BitFire].”

The NLL regular season comes to a dramatic conclusion on Saturday, April 30, when all seven of the league’s matches will occur within a three-hour window. It will be a frenetic and fitting conclusion to a campaign that has reshaped how the NLL views its live-broadcast experience.

In fact, Feld says, he’d put these NLL productions up against any professional sports-television production today. It has been a process certainly not short on stress but one that has the NLL feeling very positive not only about the remainder of the season but about many seasons to come.

“We’ve learned that this works,” says Feld. “If you put the right resources and partners in place and you push to marry the linear experience and streaming, you can do it. It’s a risk to completely reinvent how you both produce and distribute games to your subscribers and your fans, and we’re just thrilled that it has worked.”

The National Lacrosse League season continues this weekend. Week 18 opens with the Buffalo Bandits at Philadelphia Wings on Thursday at 7:30 p.m. ET on ESPN+ (U.S.) and the TSN app (Canada). The next linear broadcasts in the U.S. are Saturday, April 2, when San Diego visits Toronto at 7:00 p.m. on ESPN2 and Philadelphia visits the New York Riptide at 8:00 p.m. on ESPNU.

On Wednesday, the league announced its plans for the 2022 playoff schedule, which runs up to seven weeks from May 5 through June 20. Under a new expanded playoff format, the top four teams in the East, top three teams in the West and one wild card team with the next best record qualify. ESPN and TSN will provide live broadcasts of every game (beginning with the single-elimination quarterfinal matchups held May 5-9). The first game of the best-of-three Conference Finals is set for the following week (May 12-16), with Game 2 (May 19-23) and Game 3 (if necessary, May 26-30) set to close out the month (dates subject to change). The best-of-three NLL Finals will take place June 2-6, June 9-13 and June 16-20 (if necessary). Exact dates and the TSN and ESPN broadcast schedules for all rounds will be announced once the teams have clinched playoff home games in each series.