Even though only one of the Atlantic Coast Conference’s blue bloods made it to the title game, it’s still a big ACC party in New Orleans. All weekend long, and especially for tonight’s matchup between the University of North Carolina and University of Kansas, the ACC Network has inhabited a studio set amidst the hustle and bustle of Jackson Square.

“As the men’s tournament progressed and the ACC continued to play well, we quickly pivoted to make our production bigger than it otherwise would have been,” says Aaron Katzman, coordinating producer, ACC Network, ESPN. “Being able to go from one set of plans to a much higher level of planning in a short period of time was fantastic.”

As Duke, North Carolina, and the University of Miami trudged through the bracket, the biggest challenge for the broadcaster was figuring out where to place its studio. In a city marked by tight alleyways, multiple waterways, and heavy foot traffic, plus being prevented by Turner/CBS media rights from locating any activations at the Caesar Superdome, ESPN and the ACC Network had to work to find the right site. Through conversations with the NCAA, plans started to solidify on the afternoon of Monday, March 28 and morning of Tuesday, March 29. 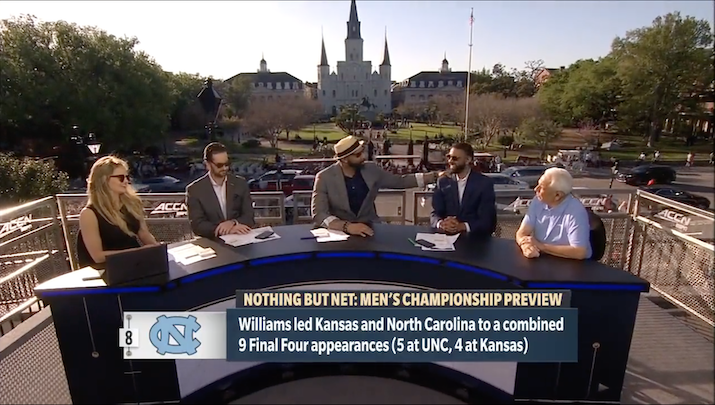 The ultimate decision was to bring the show to Jackson Square, the extremely popular destination located next to the Mississippi River and providing postcard vistas of the French Quarter. After finalizing logistics with French Market Director, Marketing and Development, Jeremy Smith, the operations team began setting up shop on Wednesday, March 30.

High popularity comes with tourists and citizens alike, who can get in the way of each show. Luckily, Oscar Dunn Park across the street provides a manmade, elevated perch overlooking the congested street and historic landmark below. In addition, the broadcaster is familiar with the surrounding area: prior to the 2020 College Football Playoff National Championship, studio programming highlighting Clemson’s participation in the game took place 350 ft. southwest at Jax Brewery.

“Within a 36-hour period, we went from having no space at all to a full set with a great backdrop,” says Katzman. “It’s a testament to the amazing flexibility of our operations team.”

In the Crescent City, ACC Network is mixing and matching technologies to highlight its conference teams. An onsite mobile unit and 30-person crew drive the show, with a control room at ESPN headquarters in Bristol, CT, integrating graphics. The show deploys a total of five cameras: three hards and a jib are linked to the truck, and a handheld for remote shots with talent is connected via TVU. 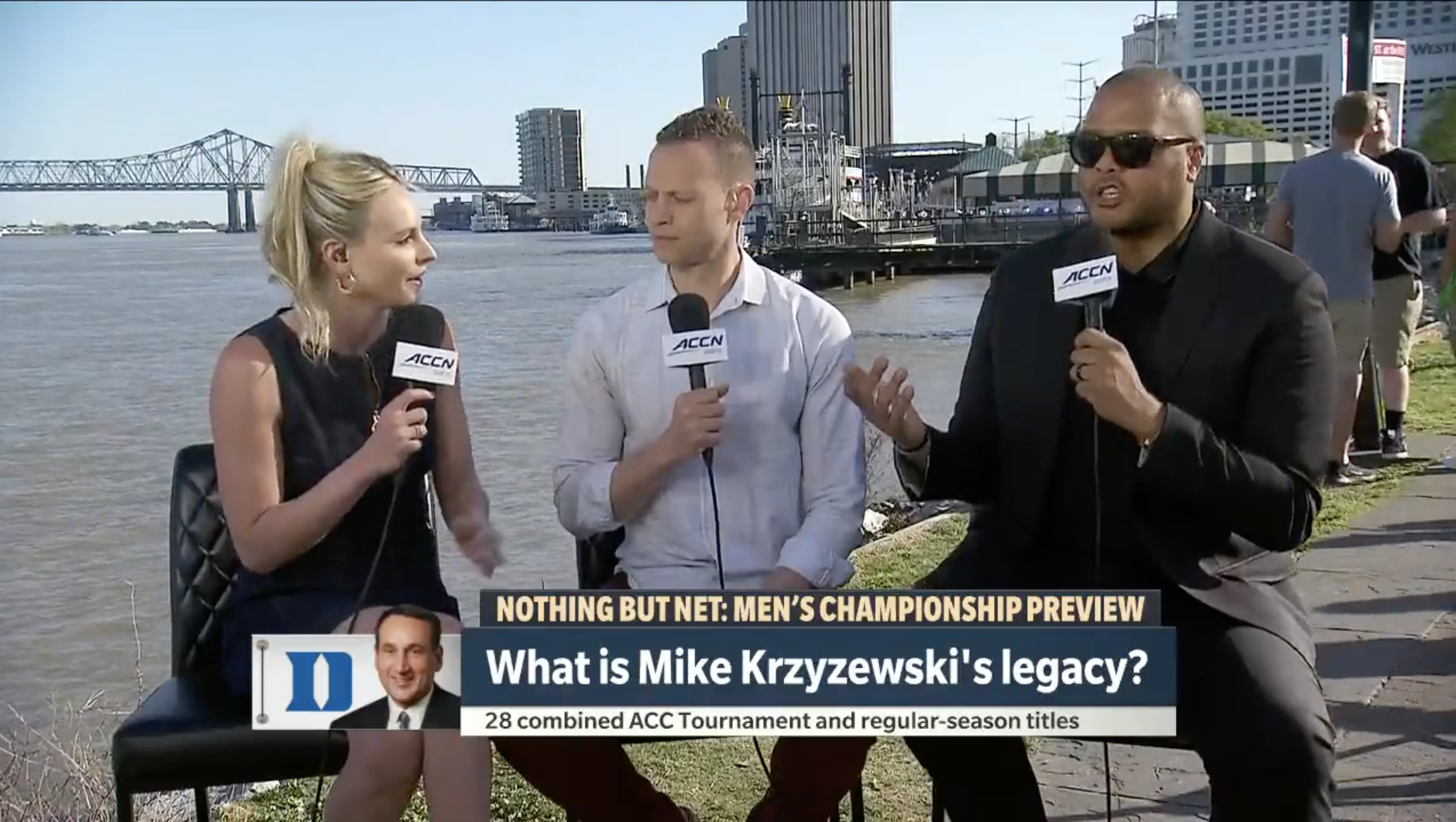 ACC Network talent (from left) Katie George, Dalen Cuff, and Jordan Cornette by the waterline of the Mississippi River

The ACC Network has been quite busy covering every angle of conference teams in New Orleans. Nothing But Net, the main studio show from the Jackson Square set, leads the way with host Kelsey Riggs and analysts Joel Berry II, Carlos Boozer, and Luke Hancock. Jordan Cornette, Dalen Cuff, and Katie George provide stand-ups from locales around the city, such as outside the Superdome and down by the Mississippi River waterline. Mark Packer and Wes Durham also are in the Big Easy for special editions of Packer & Durham.

With ESPN increasing its efforts for the Women’s Final Four, the ACC Network also covered the University of Louisville in Minneapolis. Riggs was on hand for Nothing But Net at Target Center with Kelly Gramlich, Muffet McGraw, and Chelsea Gray on Friday, April 1. Operations ceased in Minnesota after the Cardinals lost to National Champion University of South Carolina. The courtside show was a two-camera shoot handled by a producer and director, captured and transmitted through TVU, and produced remotely in Bristol. 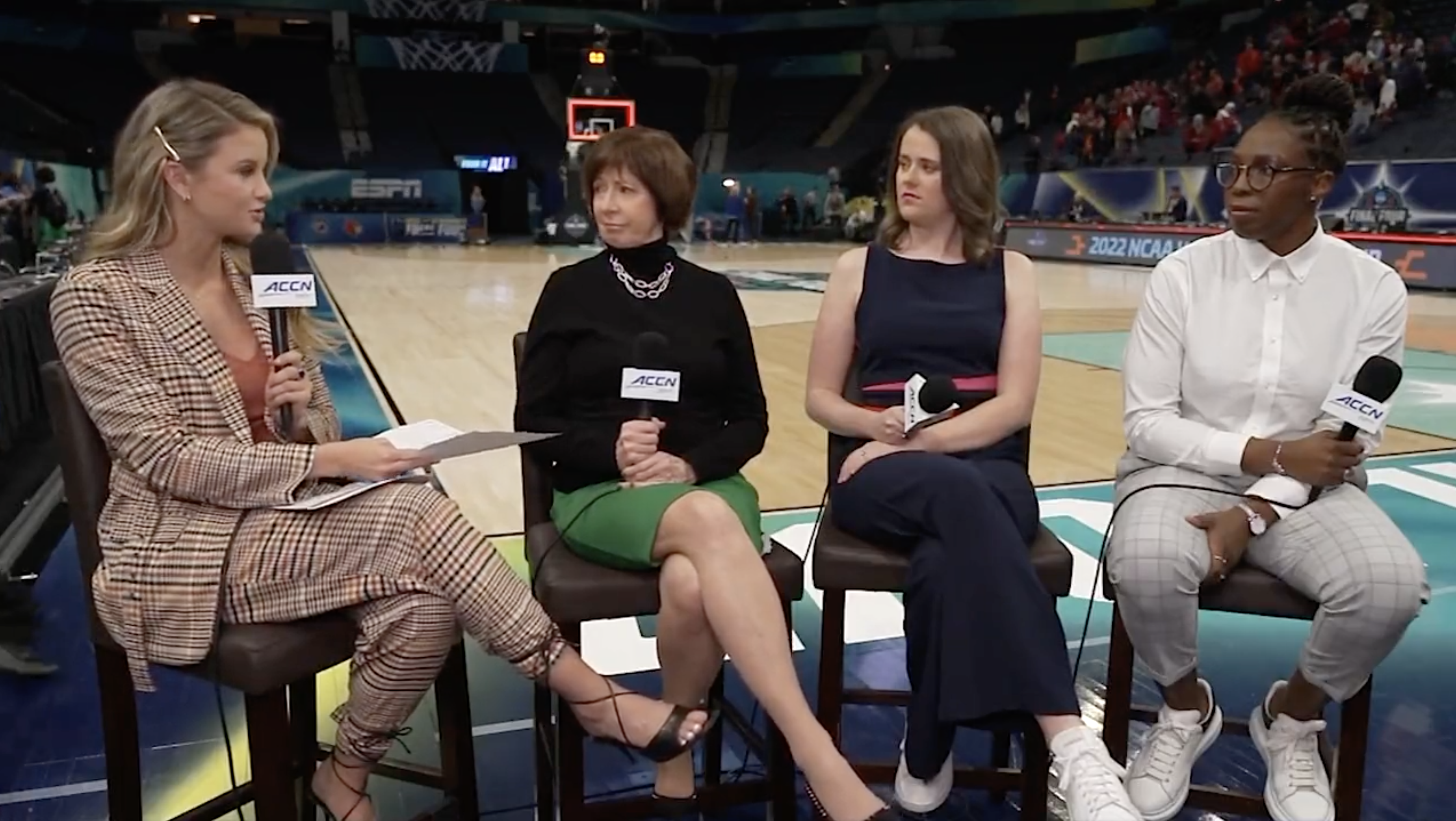 “This setup was the original plan for New Orleans,” notes Katzman. “We wanted to cover [Louisville] to the best of our abilities.”

Oddly enough, the nearly three-year-old ACC Network had not yet experienced a Men’s or Women’s Final Four. After the 2020 tournament was canceled and no ACC teams played in Indianapolis in 2021, the network has been anticipating its first time on the big college-basketball stage. To make the coverage possible, Katzman works with a star-studded team, including Director Jennifer Milkovits, Supervising Director Kristy Higgins, Production Coordinator Amanda Braunlich, and Operations Producers Jonathan Williams and Dean Ellington.

“Without any of them, we wouldn’t have been this successful,” says Katzman. “It’s exciting for us to be able to showcase this weekend to our viewers and fans.”