The company adapts content to temporary centerhung at Caesars Superdome

Since the Men’s Final Four is a spectacle attracting hundreds of thousands of college-basketball fans, the NCAA tends to host this three-game show in a gigantic arena. The 2022 edition is being held at the Caesars Superdome — the sixth time in the city of New Orleans — and Van Wagner Sports & Entertainment (VWSE) is taking its basketball in-venue show to new heights to accommodate the sheer size of this football stadium.

“We’ve practiced to make sure that this football stadium is ready for basketball,” says Daniel Zerunyan, senior producer, VWSE Productions. “There’s a new challenge for us every year, but we’ll still be able to execute.”

Retrofitting a basketball-centric show in a massive football venue demands the juggling of a lot of responsibilities. For a typical football game, the production team in the control room would have to worry about only the permanent videoboards. For this event, the NCAA worked with the Caesars Superdome and ANC to install a temporary centerhung right above the court. The building also has 32- x 9-ft. LED displays on the north and south ends, which means that videos need to fit wider screens than normal. 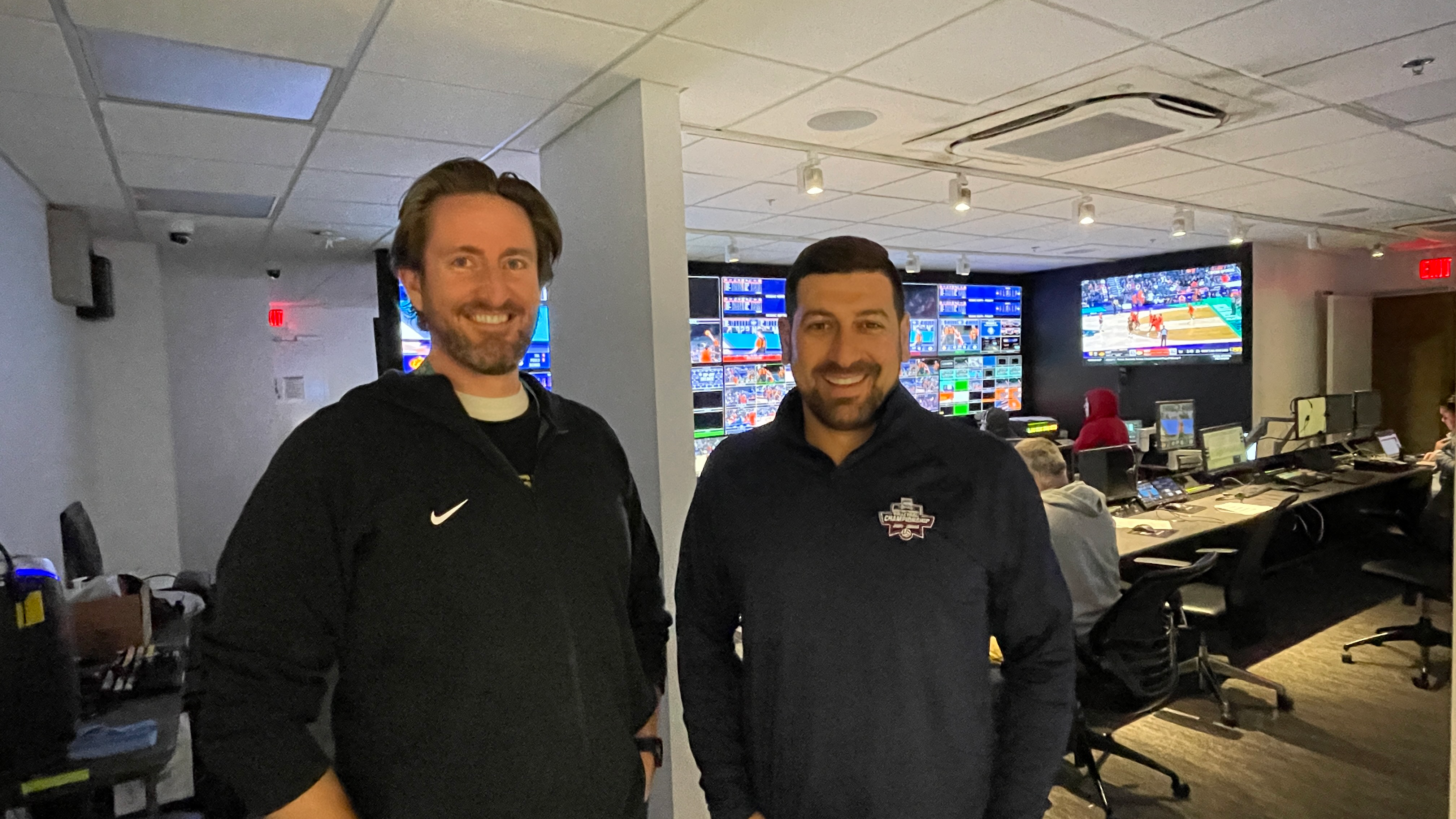 “[The NCAA] did a bunch of advanced trips to figure out how the centerhung would be designed,” says Ryan Kehn, creative director, VWSE Productions. “The configuration is a little different from typical Final Fours because we’re going with a slightly taller crop on the top of the board to stay with the widescreen format.”

For each game, the crew is rendering footage in 60 fps on a total of 17 sections of LED. This includes the uniquely shaped ribbon boards positioned at the corner of the lower bowl. The team is also flexing its creative muscles to implement newly developed graphics reflecting the Mardi Gras theme. It helps that VWSE has history in the building — most recently for the 2020 College Football Playoff National Championship — and, for extra assistance, members of the New Orleans Pelicans’ game-presentation team are on hand as well.

On the creative side, the run of show includes the traditional Dance Cam, Fan Cam, military appreciation, and trivia, but VWSE is spicing up the pregame portion of the contest. After the teams make it to the floor and before tipoff, the fans become part of the game-day atmosphere through technology developed by Cue Audio. As seen at the 2020 College Football Playoff National Championship, users can scan a QR code and activate their phone’s flashlight to match with the hype video playing on the centerhung.

“We’re putting a lot of horsepower into those big takeover moments,” says Kehn. “CBS and Turner are helping us get some extra highlights in a timely manner, and we’ve been able to turn around some high-quality videos.”

Van Wagner is operating in front of a much larger crowd than for last year’s Final Four, when capacity was pandemic-limited to 25% in Indianapolis’s Lucas Oil Stadium. The restriction didn’t limit the crew from pulling out all the stops; it actually allowed new and out-of-the-box ideas to be tried.

“Ryan and I questioned how things used to be done,” notes Zerunyan. “We’ve now taken the approach of making the show a bit better.”

Along with the pregame light show, the crew is once again deploying a tactic from college football’s biggest game two years ago. To supplement the control room used by the New Orleans Saints, Van Wagner is tapping external hardware to further improve the show. Most notably, the tech backbone includes an additional Ross XPression for the in-house Tessera system to cut down on rendering and instill more real-time playback. While the onsite team is driving the in-venue technologies, a 10G pipeline is connecting the control-room server with offsite staffers working in the city and in other locations. Six editors will be pitching in — four in New Orleans and two in Los Angeles — as Kehn, Zerunyan, and company pull the strings at the stadium. 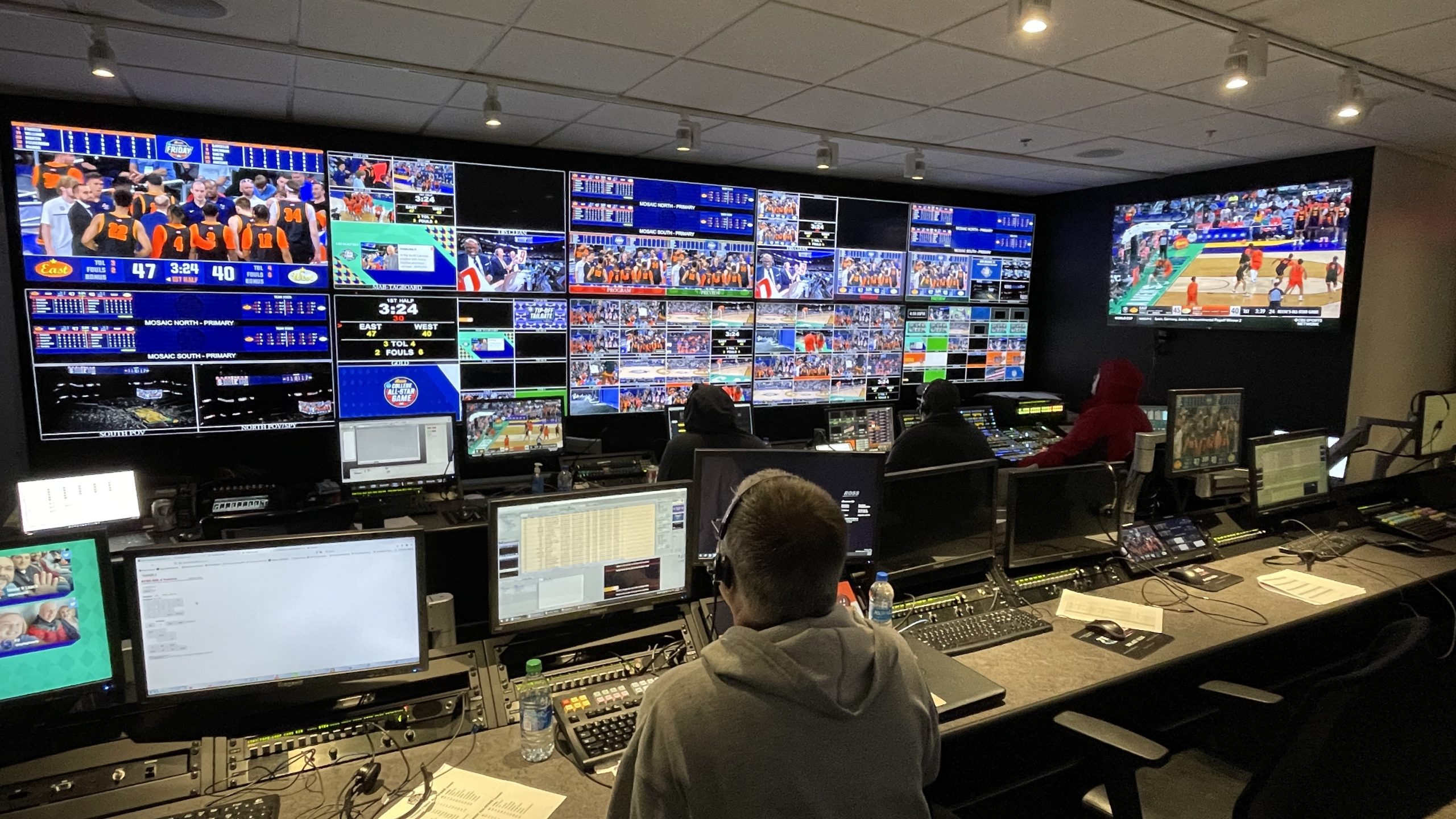 Inside the control room at Caesars Superdome

The mix of onsite and offsite resources is streamlining the fast pace of producing a total of three games in three days. Unlike the College Football Playoffs title game, for which the two teams were predetermined, this weekend featured four teams: Kansas, North Carolina, Duke, and Villanova. Heading into Monday night’s championship game, the remote editors were coming in clutch to flip over pregame trailers as the onsite staff put together the script.

“We’ve sort of adapted to this post-COVID workflow,” says Kehn. “It has taken a lot of preparation ahead of time in building projects and getting situated so [that], when boots are on the ground, we’re not boxing ourselves into a corner.

From SoFi to the Big Easy: Van Wagner Caps Off Action-Packed Stretch

Van Wagner typically has a full schedule of events, but, since the start of 2022, the organization has run the gamut of pro-sports venues. Ranging from the NFL’s new SoFi Stadium in Inglewood, CA, to the iconic Caesars Superdome, the in-venue environment is still rocking fans of all ages and demographics.

Zerunyan is more than happy to be doing his job inside a packed house. “Having the team back together has been great,” he says. “We lost some of the camaraderie with everyone working remotely, but I’m excited to have everyone onsite.”

For Kehn, being in the city where VWSE produced its last pre-pandemic big event puts things into perspective: “There are a million people out there who would take this job in a heartbeat, and we don’t take that for granted. We’re the luckiest people in the world.”