MEDIAPRO Canada has sealed a partnership for the exclusive media rights in Mexico to a wide-ranging package of Canadian soccer with new sports broadcaster Hi! Sports TV, owned by the PMKT agency and carried nationwide on TotalPlay, the IPTV pay-TV platform controlled by the Grupo Salinas conglomerate, owner of Mexican network TV Azteca. 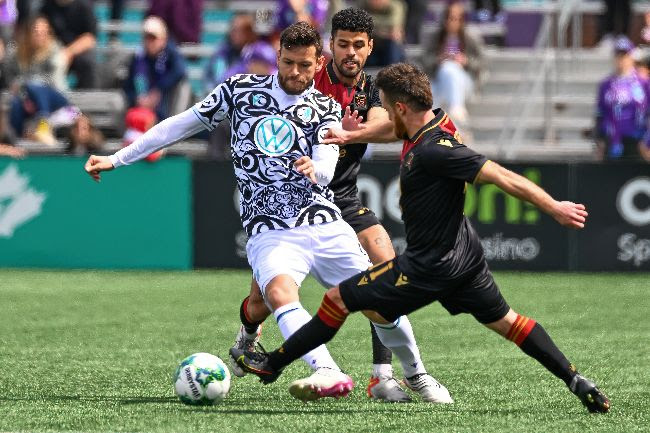 Alejandro Díaz of Mexico in action during Pacific FC’s 3-2 win over Valour FC in the second round of the 2022 Canadian Premier League.

The deal means that over 3 million TotalPlay subscribers across Mexico will have access to exclusive live coverage on Hi Sports TV (Ch.517) of the Canadian Premier League (CPL), Canada’s first division men’s professional league; the Canadian Championship, the tournament for all Canadian professional men’s soccer clubs, including the three teams that play in Major League Soccer (Toronto FC, CF Montréal and Vancouver Whitecaps); and the home friendlies of Canada Soccer’s Men’s and Women’s national teams.

Hi! Sports TV is promoting its Canadian soccer coverage under the #OlaGélida (#FrozenWave) hashtag, with comprehensive and colourful social media promotions, in a move designed to draw fans to the dynamic and exciting spectacle of Canada’s coast-to-coast soccer league, now entering its fourth season. The presence of a number of Mexican and Central American talent in the CPL, including Alejandro Diaz of 2021 CPL champion team Pacific FC, will be an added attraction for Mexican fans.

Hussein Forzán, managing director of Hi! Sports TV, said that the channel is “the place where new sports fans will find their home. We’re connecting with sports communities across the country through innovation – by being irreverent, disruptive and different. Our style is to create new personalities, new voices and to give airtime to competitions and leagues that are trending in the world of sport. New colours, formats, graphics; leaning in to the world of spectacle and entertainment – that is what Hi Sports is about”.

“Mexicans are passionate and knowledgeable fans of the beautiful game, and we’re confident they will be surprised and delighted by what the CPL has to offer” said Oscar López, CEO of MEDIAPRO Canada. “We are excited to be working with Hi! Sports TV, a bold new entrant into the Mexican sports broadcasting market, and we think their ‘hyper-connected’ approach, amplifying all their content consistently across social media, will enable Canadian soccer to gain a dedicated following.”

In 2022, Hi! Sports TV will air live coverage of all 117 games in the CPL, as well as 12 Canadian Championship matches and up to eight home friendly matches of Canada Soccer’s Men’s and Women’s National Teams, all complemented by a range of studio and panel shows. Awareness and appreciation of Canadian soccer not just in Mexico but around the world has received a significant boost from the recent performances of the national teams, with the men capping their qualification for the 2022 FIFA World Cup – their first appearance since 1986 – by topping the Concacaf qualification tournament table, while the women are the reigning Olympic champions and one of the favourites heading into the Concacaf W Championship, the qualifying tournament for the 2023 FIFA Women’s World Cup.